This is one of those food experiments that I thought would look very pretty, but figured that only J and K would actually eat it. So, I invited my parents up for dinner so it would be enjoyed by a couple more people. My dad couldn't make it, but my mom was game, and brought him leftovers.

I used the recipe at allrecipes.com, but made a couple changes due to what I had on hand. Here's the original recipe. I don't feel like the fat content on that is accurate because it has 18 grams of fat, but my olive oil would only have 7 grams per serving, and my ground turkey was 4 grams per serving. I think that recipe assumed a fattier ground turkey.

I used red peppers because that is what I had. I didn't bother with yellow peppers.

Stuffed Peppers with Turkey and Vegetables

So, shockingly enough, all four of my kids wolfed it down. The youn ger thr ee didn't get a pepper because they told me they didn't like pepper, but I gave them filling from the casserole dish and they ate every bite!

Here is the filling while cooking: 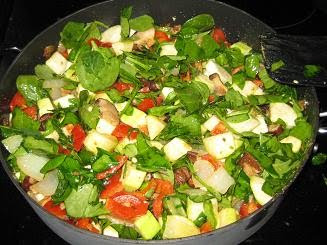 And here's the peppers: 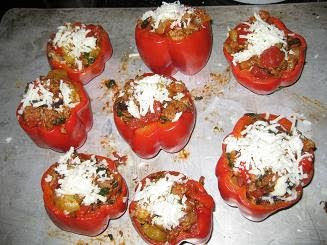 I know, my cookie sheet is a mess. I attempted to stuff a couple peppers without picking them up. That was a mistake.