How K Got Her Name

Last night, about 8:45pm, K tells me that her 7th period teacher wants an essay from each kid on how they got their name. I think this is a great idea. I get ready to tell her the story (again), so she can write her essay when we get home. (It was a crazy day yesterday, and we were out eating dinner)
"No, Mom. She wants YOU to write the essay."
"Um, I'm not a student. I have a tough time believing your teacher wants the PARENTS to write the essay."
"Seriously, Mom, she said she wants the parents to write it. I promise!!"
I'm still not entirely convinced I'm NOT being conned, but on the off chance she's right, here's the essay that I quickly typed up and emailed to her teacher this morning.

How Kysa Got Her Name

I was about eight months pregnant with my oldest child when crisis hit. I already knew I was expecting a girl, and I’d chosen a name for her (Samantha). One of my closest friends finally came in to town, and wanted to see my ultrasound video that I had of my expected baby.

As she watched the video, she started making comments. She’d say things like, “Oh, look, there’s Samantha’s arm!” or “Oh, there’s Samantha’s little mouth!” I wanted to slug her and say, “QUIT CALLING HER THAT!!!!” (read that with a slightly crazed, demonesque voice that pregnant women sometimes have)
I realized that while pregnant rages are quite normal, the fact that I didn’t like someone calling my unborn child by the name I had chosen was probably not a good sign. With that conversation, I realized that while I did love the name Samantha, I didn’t feel it was right for this child. I was in a panic- this baby was coming in less than three weeks, and I had NO IDEA what to name her.

At the time, I worked in a model home. Things were fairly busy, however, I did have a lot of time to reflect on the fact that my poor child was still nameless. This was definitely a sign that I was going to be a terrible mother.

One afternoon, I was at work, obsessing away, when I heard the door to the model home open. In walked my grandfather. This was quite a shock, as he’d been dead for over three years. Once the light was out of my eyes, I realized that while the resemblance was striking, this was actually his brother, who was (obviously) very much alive.

He had heard I was working at this model, and had some questions regarding my mom and her siblings. He is an avid family history researcher, and needed some birth and anniversary dates for our side of the family. I gave him the information he needed, and then said, “Since you’re working on our family history, you must have come across some good names in our family tree. I am looking for suggestions for a girl’s name for this baby.”

He gave me a look like I’d better hurry and come up with something, and FAST (I also was carrying very large, and people were very nervous to be around me that last month; they were terrified I’d drop and give birth at any second). The first suggestion he gave me was terrible, but the second suggestion was “Kaijsa Marie”, from a Swedish branch of the family. I LOVED how the name rolled off the tongue, and asked him to spell it. Hmmm. I didn’t like the spelling. Nobody would ever pronounce or spell “Kaijsa” correctly.

I said goodbye to my great-uncle, and spent the rest of the afternoon trying to anglicize the spelling of Kaijsa. By the time I left work, I’d decided that “Kysa” was going to give her the best chance of easier spelling and pronunciation.

I came home that night, excited to share our baby’s new name with my husband. He was agreeable to to the “Kysa” part, but not the “Marie” part. I have to admit I was a little surprised by that- I thought “Marie” would be the easy part. After a couple days of playing around with names that had the same basic cadence as Marie, we finally agreed upon “Nicole” as the middle name.

People have struggled to pronounce and spell Kysa’s name correctly, and I still get the occasional hairy eyeball and accusation that I made the name up, but when I tell them it’s a Swedish name, and a family name to boot, they tend to shut up. I still love the name, but I do have to admit that Kysa’s siblings all have names that have appeared in the top 50 most popular names at some point or another.

If you've been to my house, you know that the road is in pretty terrible shape. J and I don't see eye to eye on this. He wishes the city would fix it. I LOVE it this way. For one thing, it gives everything kind of a nice country feel. Secondly, and more importantly, I think it deters speeders. People love to speed down our road, and I'm terrified that there's going to be a terrible accident one day.
We actually did have a fatality a couple years ago. On the same street,
but a couple blocks north, a couple was in their front yard, gardening. Two cars got racing, and one lost control and ended up hitting and killing the wife. The road there is in much better condition (different city).
So, I don't have a whisper of complaint for the state of our road. We joke about the lakes in the front yard. The city occasionally comes by and puts some road base in there, but it is a very temporary fix.
Today, I watched a pothole crew come to the roughest spot of road in front of my house. I have taken a picture and circled their work. 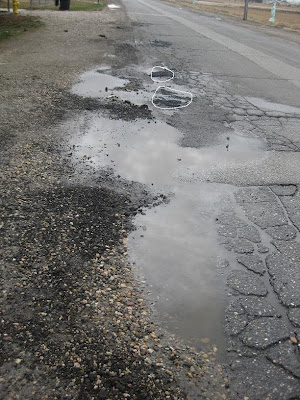 My city has been offering some local co-op produce, and they were looking for tasters for the products. I volunteered, and this morning I tasted the honey. Here is my review of it.

This morning I got yet another reminder of just how little I know about food sometimes. Before this, I thought that honey was honey. Bees make honey. We eat honey. I didn't realize that there was a difference. I would just buy whatever was cheaper, though I would try to get locally produced honey if possible.

Turns out, they can process honey quite a bit, and it has a rather dramatic effect on it. Most of the

honey we buy in the grocery store is pasteurized and filtered. It makes for a nice, clear product, but the enzymes, antibacterial properties and other parts of the honey can change.

The first big difference we saw was appearance. All three were filtered, and the first two were pasteurized. The farmer's honey was significantly darker in color, and wasn't quite so clear. 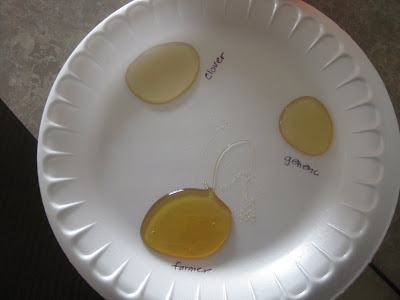 We were given bread and butter to help us with the sample, but I mainly tasted each by itself to get a better taste. The next big difference was the consistency. The grocery store honeys were quite a bit runnier. I put a blob of each of the three on the plate, and then held the plate upright for a few seconds to show the difference in runniness. 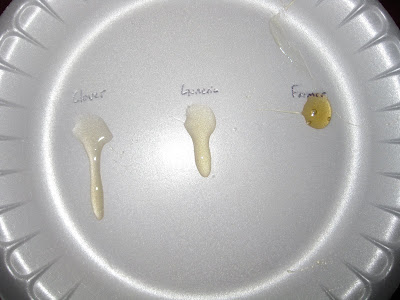 Then came my favorite part- TASTING! I'll admit that I didn't taste a huge difference between the clover honey and the generic Utah honey. The utah honey was slightly better, but not a big difference. There was, however, an enormous difference in the farmer honey. It wasn't nearly as sweet. Now, I realize this may seem like a bad thing, but it really wasn't. It was still definitely sweet, but it had a more complex flavor, if that makes any sense. You didn't have that teeth hurting all consuming sweetness with the farmer's honey that you got with the canadian clover honey.

The best part is that it looks like the farmer's honey will end up being cheaper per pound than either grocery store honey, and by a fairly significant margin. Now, you'll have to buy more of it than what comes in a little honey bear, but good news- Honey is about the only food on the planet that never, ever goes bad.

If you are interested in buying, here is a link to the order form. You have to scroll past the citrus and beef order forms to get to honey. They are charging $13.75/tub (5 lb tub), and that works out to be about $2.75 a pound, which is a great price!