I have to admit that Christmas snuck up on me this year. We've been so consumed with renovating the new house, work, school, scouts, etc etc that I didn't see it coming. I've felt guilty that our kids have not had much of a Christmas season. I was hoping to be moved into the new house by Christmas (didn't quite happen), and so I didn't want to put up the tree at our old house. We finally put up our tree on 12/22. We put it in the new house, after we finished grouting. Here are the little kids decorating the tree. 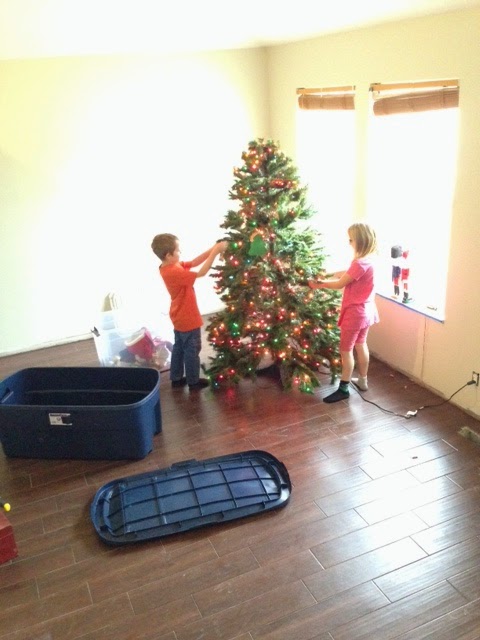 We did try to make the house look as festive as possible- we hung up the stockings at the new house (only to rush to the house at 10pm on Christmas Eve to retrieve them so that Santa could fill them while we slept).
I did make peanut butter fudge, as well as a batch of traditional fudge, and we brought it to the neighbors in our new neighborhood- we thought it was a nice excuse to try and meet all of our new neighbors. I am very optimistic that we'll really like it there.

Alas, Christmas doesn't wait for distracted moms and dads, and Christmas Eve was upon us. I thought I was being SO SMART. I put all of the kids' Christmas presents at my office. That way, I didn't have to worry about any potential moves, forgetting where I hid things, or kids stumbling/snooping upon their gifts. A couple of days ago, I bought K a beautiful Christmas Cactus (hey, it was on her list, along with cactus potting soil. I buy off their wish lists!) My office doesn't have any windows, so I left the cactus out in the conference room, along with a jasmine plant that Santa was going to bring me. 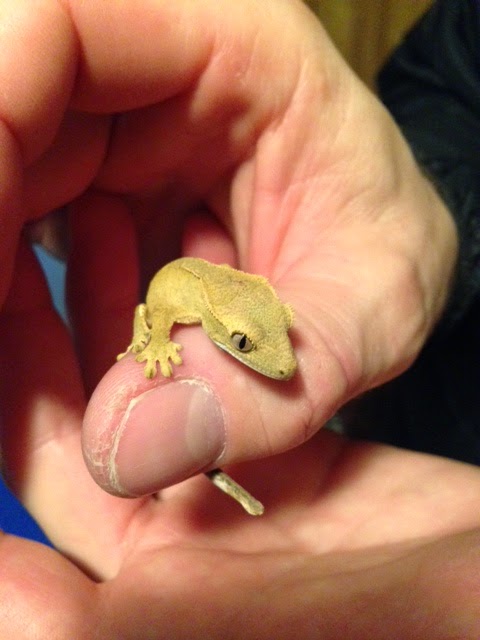 The present I was most excited about was a REAL LIVE crested gecko for Z. I had made arrangements to pick it up on Christmas Eve. I'd contacted the seller online, and was a little worried she'd flake on me, but she came through with flying colors. We got a beautiful baby gecko, as well as a good sized enclosure that will last for several months.


So, after we picked up the gecko, we had our traditional Christmas Eve party at my parents' house. It was really fun. We got home, and got the kids into bed. I then drove to my office to pick up the presents. Everything was how I'd left it, except for K's cactus and my jasmine plant. The paper bag I'd brought them in was there, but the plants were gone. I searched the office high and low, but NOTHING. I'm not going to lie. I kind of lost my temper and said a lot of very bad words. I texted my broker/friend, very diplomatically, and asked her if she knew where my plants were, and explained they were Christmas gifts. It was nearly 11pm though, so I didn't expect an answer back.

I came home, swearing like a sailor. I decided that we were getting the kids NOTHING (because that means I wouldn't have to wrap anything), and that Santa was giving ALLLLL the gifts this year. J talked me down a little, and we set everything out.

I had trouble sleeping. I was genuinely disturbed that my presents had been stolen. I like, respect, and trust all of my coworkers, so the idea that they disappeared was distressing. I felt sure that it was an honest mistake, but I was pretty full of rage.  Sometime in the night, my broker/friend texted me back. Another agent had told her there was a bunch of gifts for her in the conference room, and she should come get them. Evidently, she'd thought the plants were part of that. She had been so excited about them that she'd taken pictures of them before she took them home. She was absolutely mortified that she'd taken something that hadn't belonged to her and was really upset. Upon hearing what had happened, my rage instantly evaporated, and it became hilarious. My broker and I immediately started calling it The Plant Heist of 2014.

After he woke up, Z came in to show us his super cool lizard feet slippers, and told us how much he loved them. A little surprised that THAT was what he wanted to talk about, I asked him what his favorite gift was. It was an enthusiastic "Slippers!!!"

"Really? The slippers were your very favorite gift?!" 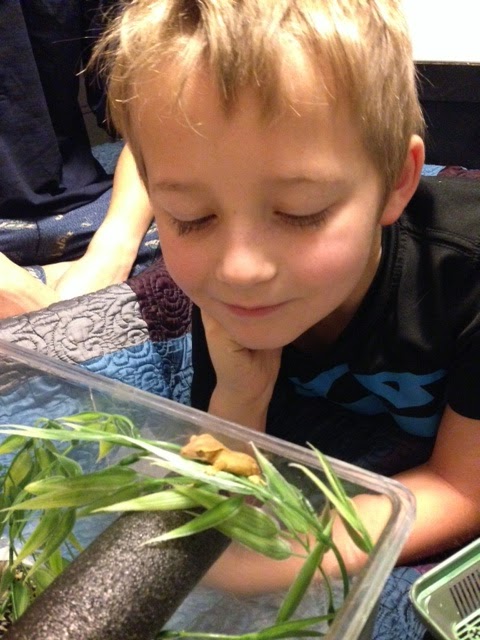 "Yep, they're really neat, and they keep my feet nice and warm."

"Uh, Z, what else did you get for Christmas?"

Turns out that he thought that the lizard was JUST the cage. The gecko is awfully tiny (2 grams, if memory serves, and only a couple inches long), so he didn't see him in there. I asked him to bring the "lizard cage" into his bedroom, and I pointed out the gecko. He is such a sweet kid, and was perfectly enthusiastic with just the cage, knowing that someday, he'd get something to go in it. When he realized he actually had a gecko, he was so excited. It was definitely the best gift given this year. I tend to have a gift I'm most excited about, and this one was DEFINITELY it. 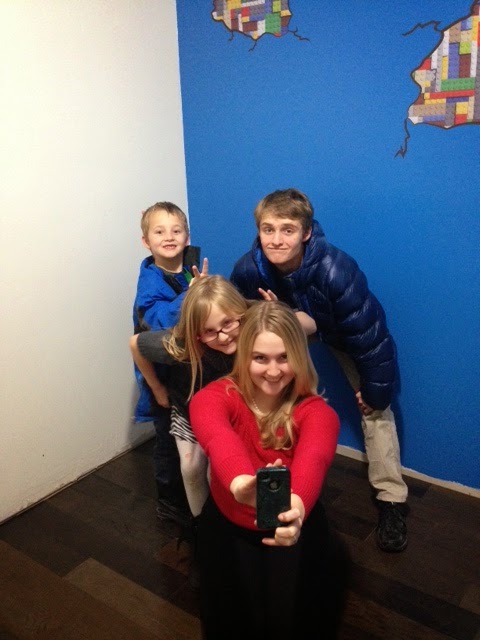 All in all, this was a wonderful Christmas. We received wonderful gifts. While I didn't give it the normal attention, I hope I gave good gifts.

I go to bed tonight feeling incredibly loved, and loving the family and friends I'm surrounded by.