My attempts at "Candling"

Unfortunately, we're down to five eggs. My black copper marans egg got stepped on and broken. Lucy is in the favored box (read: only nesting box that really counts), so the other chickens keep trying to step over her to lay. Never mind there's five other perfectly good boxes. We went camping for a couple days, and my neighbor chickensat for us. While gone, my neighbor was getting 1-2 eggs a day in the other boxes, and figured they weren't laying much because of the heat. Then, Sunday morning, she realized there was a broken egg under Lucy, so she went to clean it up. She found a DOZEN eggs there that weren't supposed to be hatching! Poor hen was trying to sit on 17 eggs.

I've never really been known much for my patience. When I heard that it's possible to "candle" an egg, I was all over that.

I've been trying to rig something to candle the eggs, but I don't think I've been entirely successful. I don't think the light is quite bright enough. The only egg that I feel like I'm getting much luck with is the white egg.

This is what I saw yesterday, which would be around day 7: 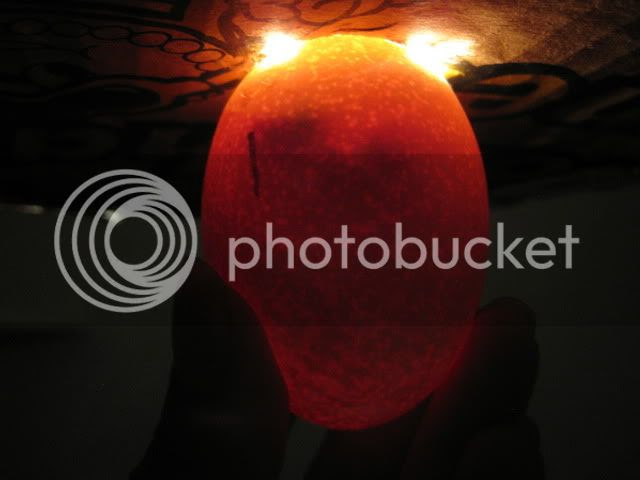 That definitely looks like more than just a plain, unfertilized egg. However, I don't see any veining, and I don't see any independent movement, like I've seen some of on youtube.

Today, after finding two different chickens sitting on poor Lucy, I decided to try and separate the henhouse so that she'll be left in peace. I used our chicken wire/fabric, and just tacked it up. Lucy still has access to food and water, but she can't get out of the coop. She hasn't wanted to, so I only feel a little guilty about that. On the plus side, so far, no other chickens have gotten in.

When I was trying to rig it up, Blondie kept trying to sneak past me into the nesting box so she could lay. She was such a pain that it was like having a 2 year old out there "helping" me. I finally got the net up enough to where she couldn't go in, and she finally gave in and went to a different box and laid.

I noticed that Lucy, my black copper marans hen, has been spending most of her time sitting in the nesting boxes. This coincided nicely with me putting Sue in with the girls, and getting (I hope) fertile eggs. With her going "broody", I thought it would be fun to experiment and see if we could get some chicks.
So, on Sunday night, I decided to give Lucy the four eggs that were laid that day (well, the fourth egg was one of her own, and from a day or two earlier). Then, I decided to give her three eggs that were laid Monday. I didn't bother giving her an egg from the silver laced wyandotte because she is so mean to Sue that I seriously doubt her eggs are fertile.
The eggs that I decided to let her try and hatch are all marked with a marker because the other chickens keep trying to lay eggs in the box she's sitting in, so when I go to collect eggs, it could get very confusing. Here are the eggs I have given Lucy to try and hatch (one of the white ones went into the cheesecake). 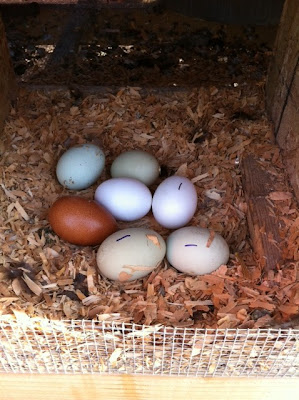 Monday night, I realized I was shy an egg for a cheesecake for K's birthday party, so I went and stole one back. Oops.
Anyway, from what I've read, chicks hatch in about 21 days, so I figure around August 8 or 9th, we could possibly see some babies!
When they have been sitting under the chicken for 7-8 days, I can try "candling" the eggs, and I should be able to tell if there is a chick developing. I'll have to try and find a really powerful flashlight and try it out in a week or so.
Here is Lucy sitting on the nest. Doesn't she look MEAN? So far she hasn't tried to peck at me, but she makes a weird growling sound whenever I root around, trying to find eggs that I haven't earmarked for her. 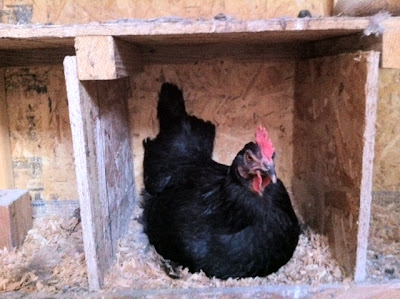 I just realized that I haven't blogged about my chickens in a while. Frightening!
First, Lucy, the black copper marans, saw her replacement (more on THAT later) because we had all of the chicks outside in our time out coop, and started laying again. Same big, beautiful eggs, 3-4 a week. Because of that, there's been a few times when I've gotten an egg from all seven hens in one day! 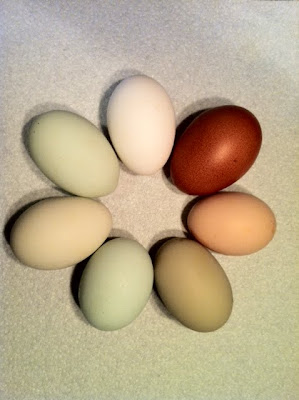 Second, much as I hated to admit it, Foster/Sue seemed to have a much redder and more developed comb than I thought a pullet ought to have. Sadly enough, he started crowing, and is most definitely a rooster. He was kind of picking on a rooster my neighbor had, and she got fed up with it, and kicked him out. We put him in the time out coop, and she kept her chickens in her back yard.
Here's a video of him crowing from a month or so ago:
And here's a picture of him taken just a few days ago. I think he seems to have grown into a very handsome boy. His crowing has improved, but I haven't taken video of it recently. 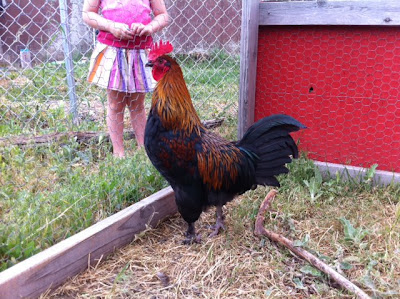 We are in the process of making the chicken run about 3x as big as it was before. We did most of the work today, we just need to get some more chicken wire to complete the project.
Once that's done, we'll probably have Sue join the girls. As it is now, he's still separated from them because he hasn't quite asserted his dominance yet. He did manage to, um, not be a virgin anymore. That was awesome- we had our friends and their six children over when that happened. However, there's still a couple hens picking on him. He is bigger than all of them now, and that really helps. In the beginning when he was smaller, he just ran away like a big old chicke... well. Yeah. Anyway, we'd been calling him Foster up to that point. But, we decided to go back to Sue, following Johnny Cash's philosophy in "A Boy Named Sue".
I think he was shocked because his nestmates adored him. They followed him everywhere, and he basked in their admiration.
They still remember him, and recently when he was free ranging, the saw him on the other side of the fence and went running over to visit. It was funny. 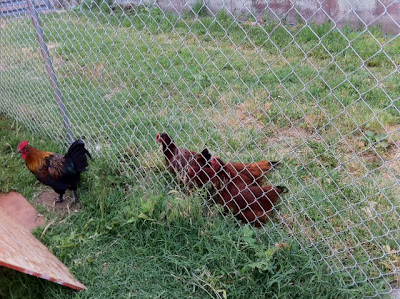 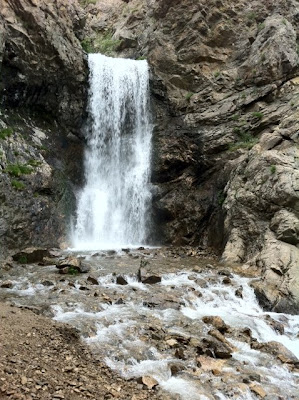 For date night last night, J and I decided to hike up Adams Canyon to the waterfall. That link has a typo- it's actually 4.2 miles round trip, with an elevation climb of 1580 feet. It is a somewhat challenging hike. I'd take my 11 and 13 year olds, but not the 4 and 6 year olds.
The sun was starting to be a bit lower in the sky, and most of the hike is shaded, so it was really quite lovely. 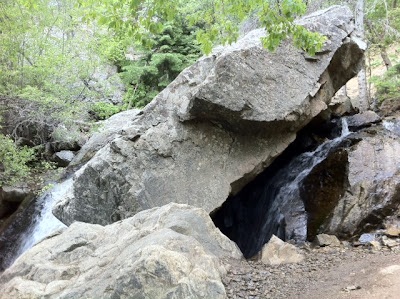 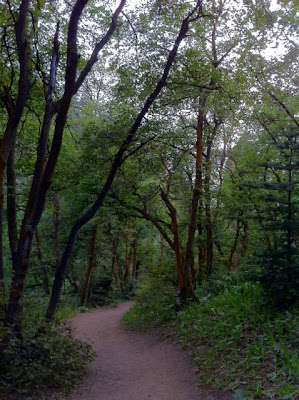 Looking down the trail. 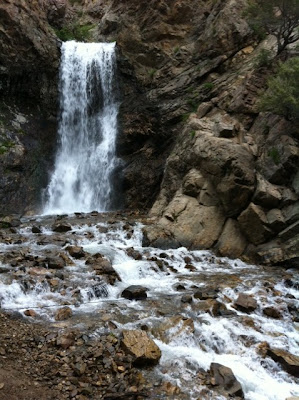 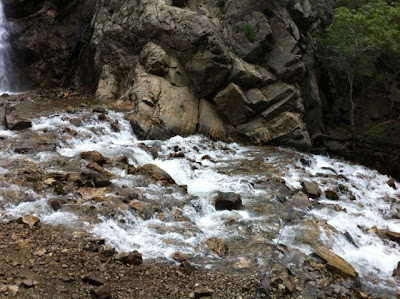 See that rope across the river? No? Look closer. It's there. To get to this angle, you have to take off your shoes and socks and walk through icy cold water. We're talking 35 degree water, I swear. My feet were numb by the time I got across. 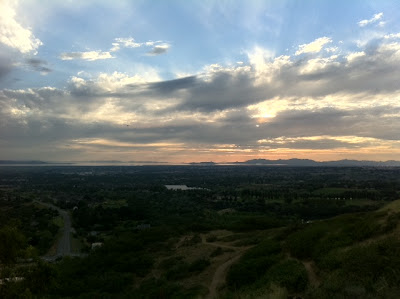 The sunset view we saw as we left the canyon and went down the switchbacks to the trailhead.
at 5:34 PM No comments: