So now we come to finally moving in. It turned out to be later than we hoped, but we did finally get moved in to the new house the second week of January. We had a ton of amazing friends show up and got us moved in lightning fast time. For now, S, Z and M's rooms are too messy to do an "after" photograph. If/When they get them cleaned, I will add their photos. 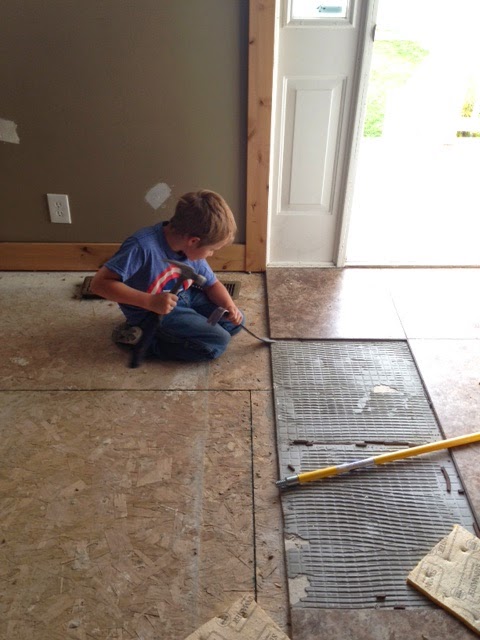 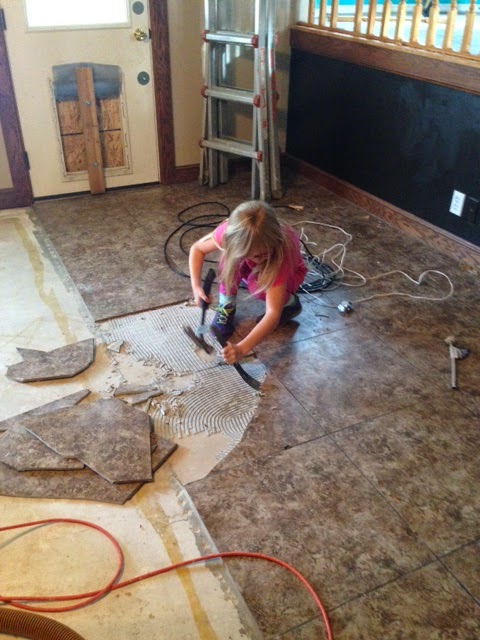 When I left off, I was left with a smelly, filthy house and a husband who had to go to Europe. It was time for demolition to begin. We initially thought we'd save the tile in the house because we liked how it was tiled through the main living areas. As we looked closer though, we realized that several of the tiles were broken, and we were unable to find matches. We realized we'd have to tear it all out. This was bittersweet. Bitter because it was going to make renovation cost and time jump. Sweet because I have to admit I didn't like said tile. The kids got a kick out of pulling the tile and were pretty helpful.

As we started pulling it up, we realized that most of it hadn't been properly set- they'd put the tile directly on subfloor in some places and vinyl flooring in others. Tile should be on cement or cement board. Because of this improper installation, the grout had cracked, and water got underneath. We had to replace subflooring in some places because of mold. Luckily the mold didn't go beyond that. 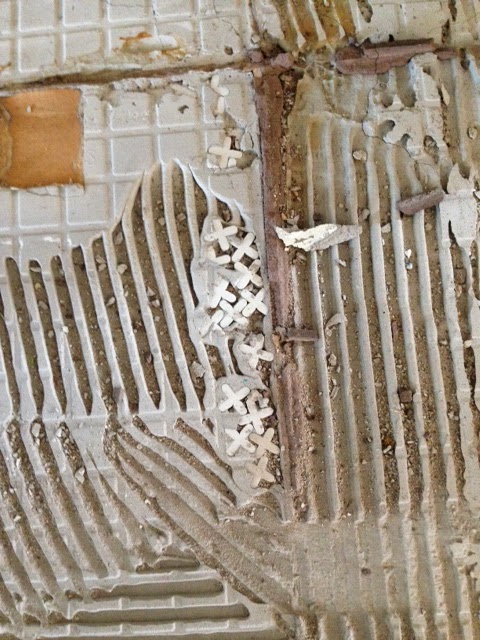 They also had some rather unique ways of leveling the mud in the family room- the cement wasn't level, particularly around the edges, so this was their solution. Some people (like us) would think to use leveling compound. Not these guys!! 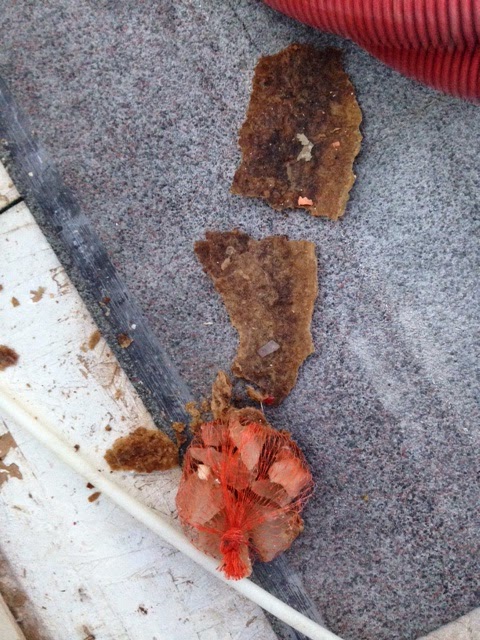 Due to the dirt in the house, we felt it would be best to have the ducts cleaned. This was one of the fantastic things found in the vents. The others won't be published here, but it was gross. The guy doing the work admitted that it was in the top 10 dirtiest he'd ever seen. 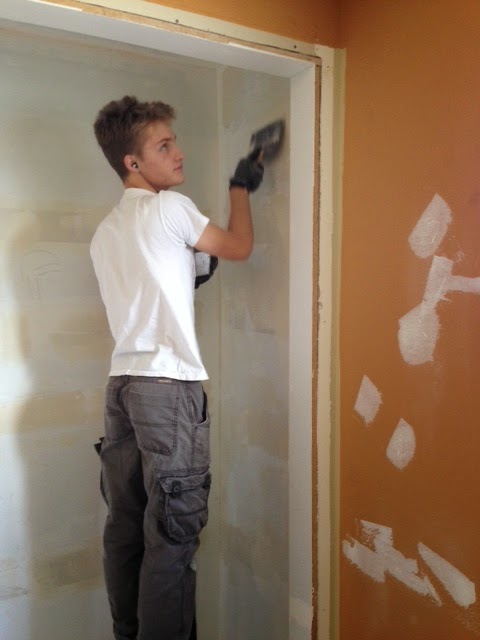 M was incredibly helpful through the process. He did most of the work in his own room. 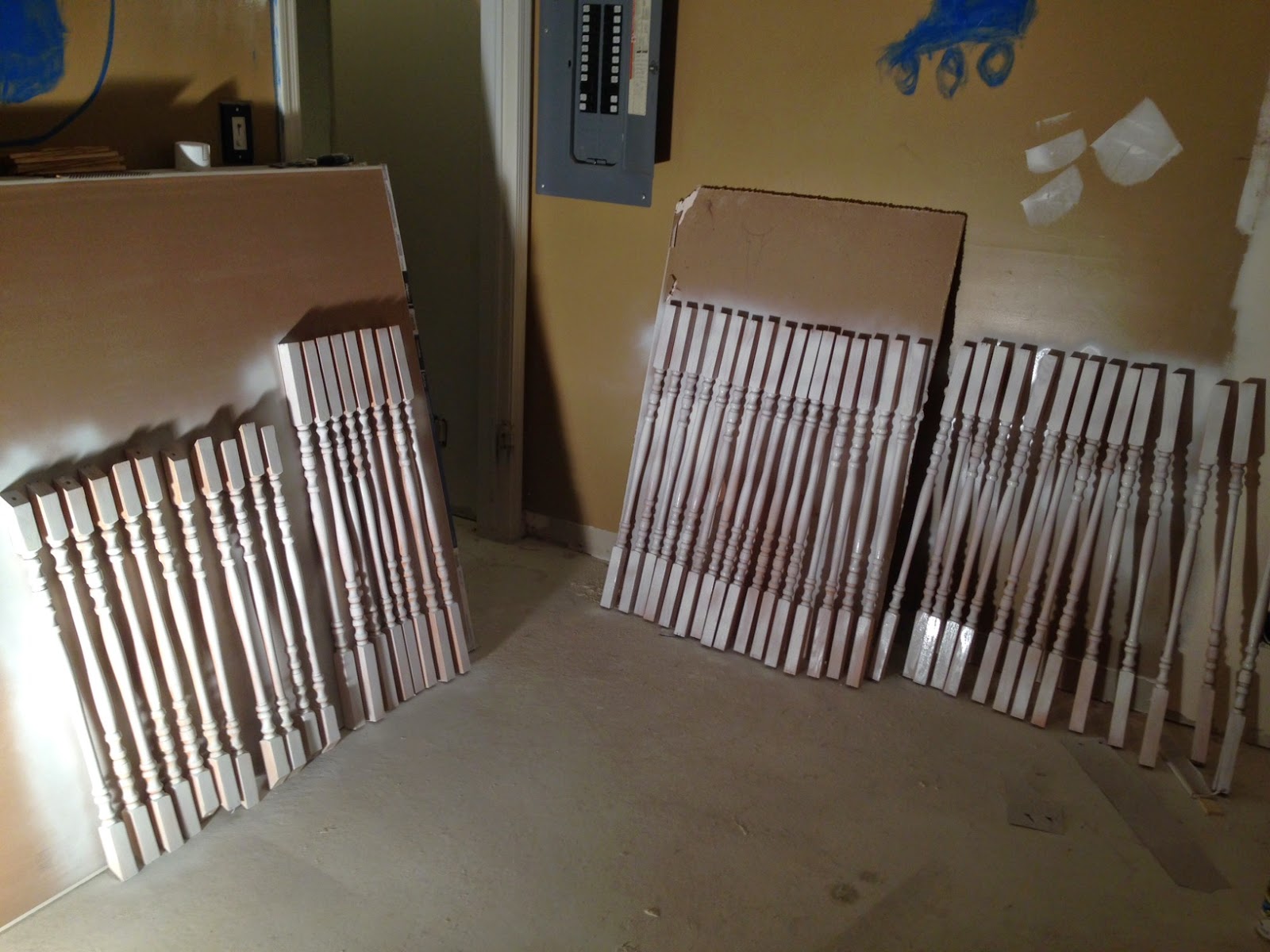 J's dad helped a lot with the drywall work and other highly skilled labor. I decided I didn't like the natural oak rails and spindles and decided to strip and restain them. That was incredibly difficult, given the coarseness of the grain of oak. There's all kinds of sites all over the internet and pinterest that claim it's easy. They lie. Trust me on this. I think that if I had been working with a finer grain, like, say, maple, it would've been a completely different story. I eventually did get all of the rails, toe, shoe and base stripped and restained. When I saw those 49 spindles staring at me, I decided to have a change in design plan. Instead of them being the darker stain, I'd paint them. I think my sanity thanks me.

My other big project was the kitchen cabinets. I loved the tall cabinets and how large the kitchen was. However, the cabinets were filthy, dinged, damaged, and the polyurethane was coming off in places. I decided to paint them. To make the job look as professional as possible, I took all doors off the cabinets. I then cleaned them very thoroughly. This took quite a long time, given the layer of dirt and grime on the cabinets. Some of the drawers needed significant repair too. I spackled the dents and cracks in the doors as well. 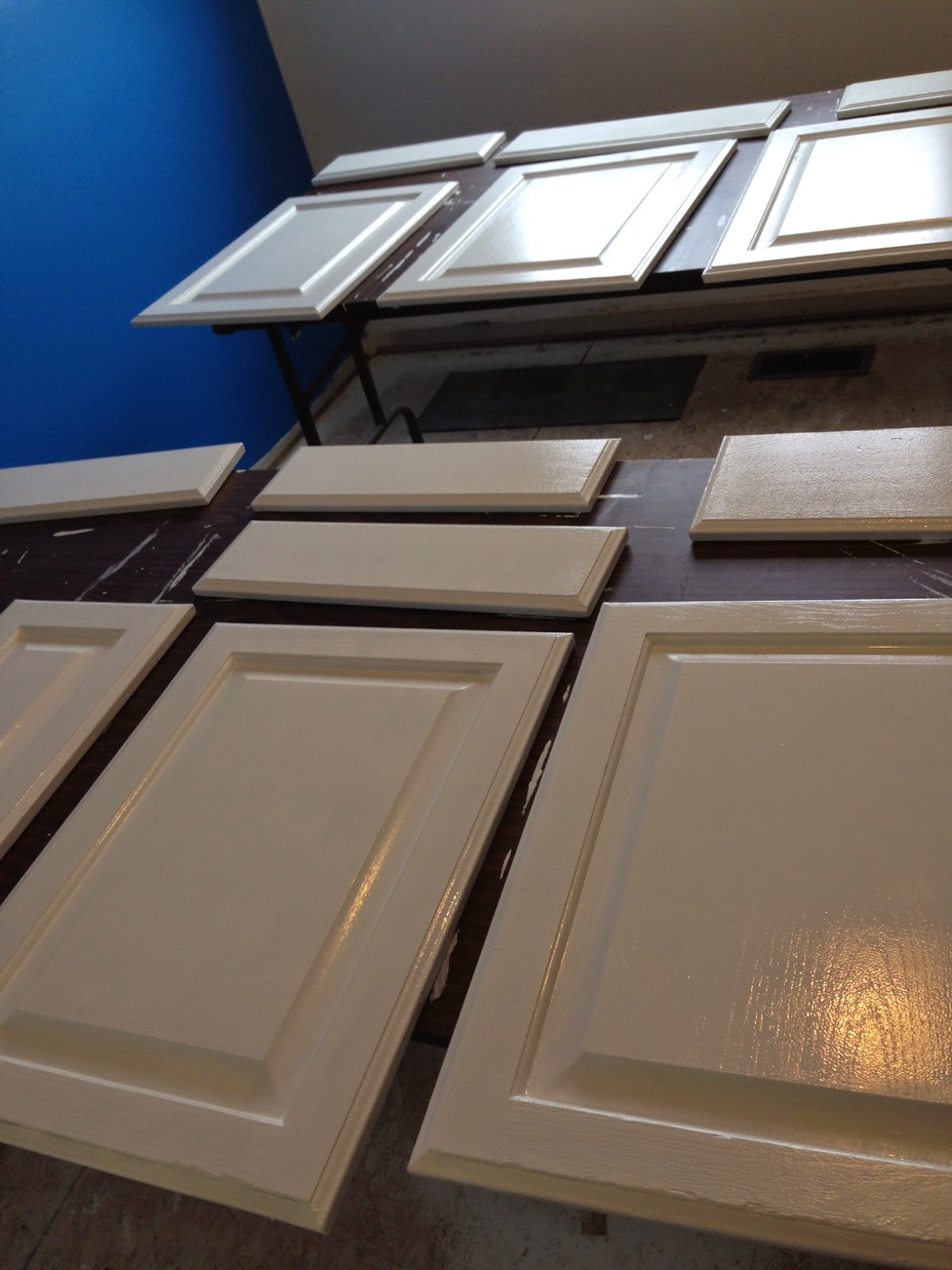 Once the cabinets were prepped, I primed them with Zinsser oil based primer. I did two coats of that, letting each coat dry overnight before applying the next. Once that was done, I painted the cabinets with Benjamin Moore Advance paint in semigloss. Did you know that Benjamin Moore has over 50 shades in the "white" category? I eventually settled on "Cotton Balls." I did three coats of that on everything. I let them dry 24 hours between coats. One gallon was enough for my kitchen. I had to buy an additional quart when I painted the landry room cabinets and bathroom vanity. I absolutely adored this product. It's a very thin paint, but it self levels and has been very, very durable so far. 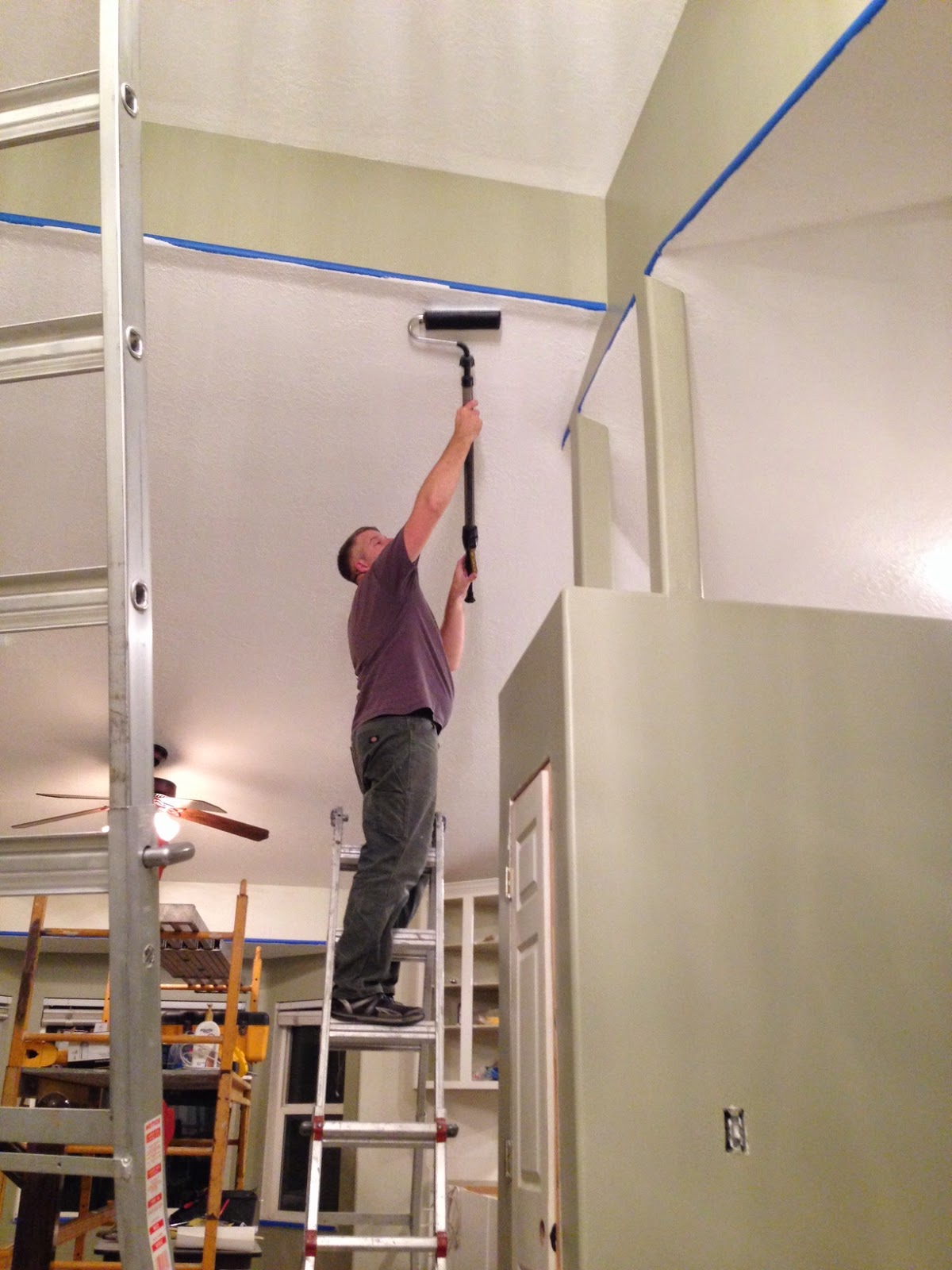 Meanwhile, J was working on some electrical and plumbing. In the kitchen, there was a single fluorescent light. We pulled that out and installed pendents (with LED bulbs) and three pendant lights. All of the seals on the plumbing had cracked from drying out, so we had to replace all of those. He also was ready to start painting over all of the crazy paint colors. 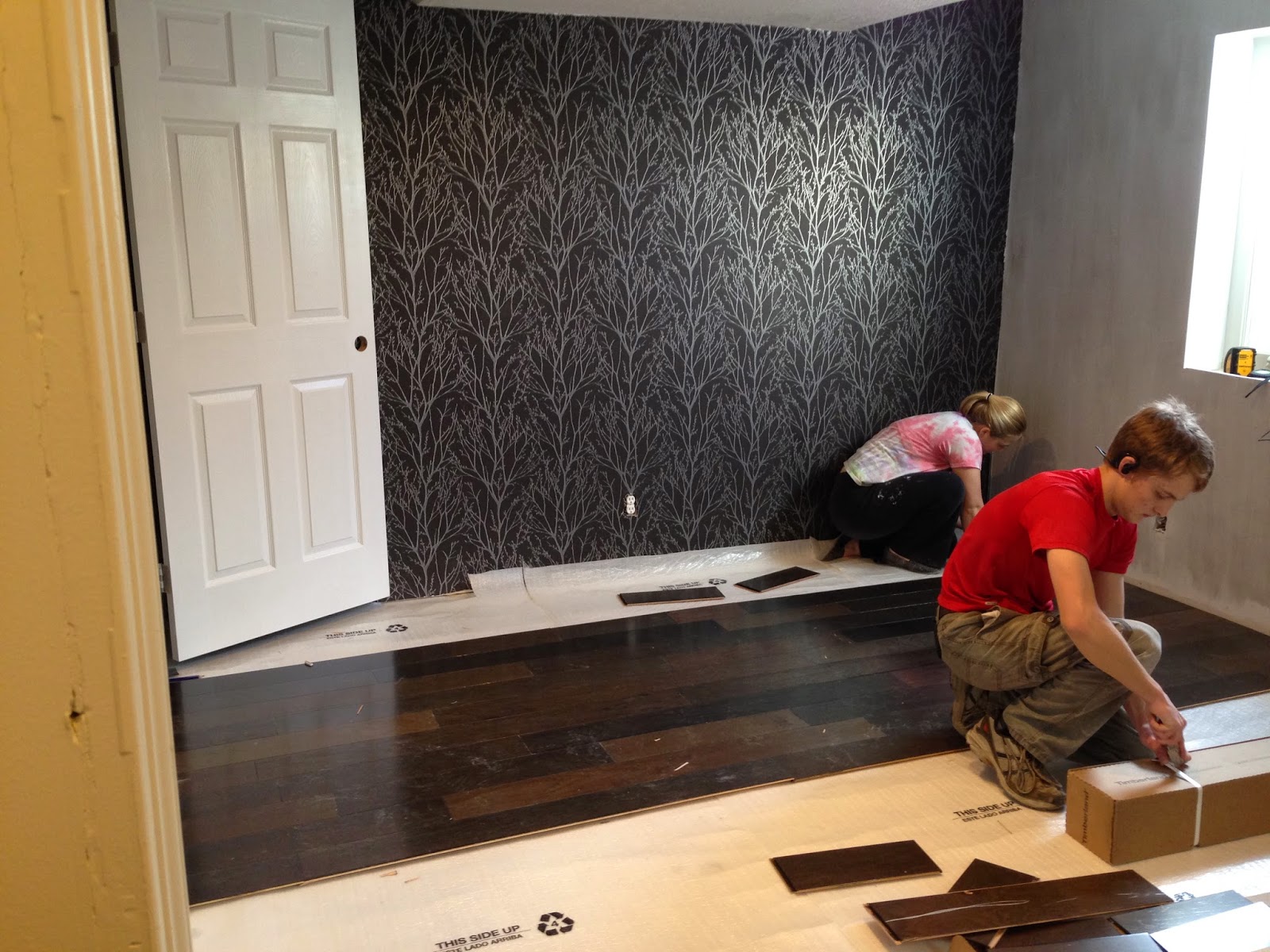 Once painting was finished, we were ready for flooring. For the bedrooms and halls, we bought a beautiful engineered hickory hardwood from "Floors To Your Home" They were very simple to install. J and I were able to get each bedroom installed in a couple hours. K and M installed their own floors, which I think they loved. K painted her own room and put a metallic glaze over the top. She was in LOVE with that silver and black wallpaper, and I ended up buying it from the UK and installing it. It was very tricky- it was very fragile and awkward. None of this vinyl backed, prepasted stuff. Nope. I had to do it the hard way. 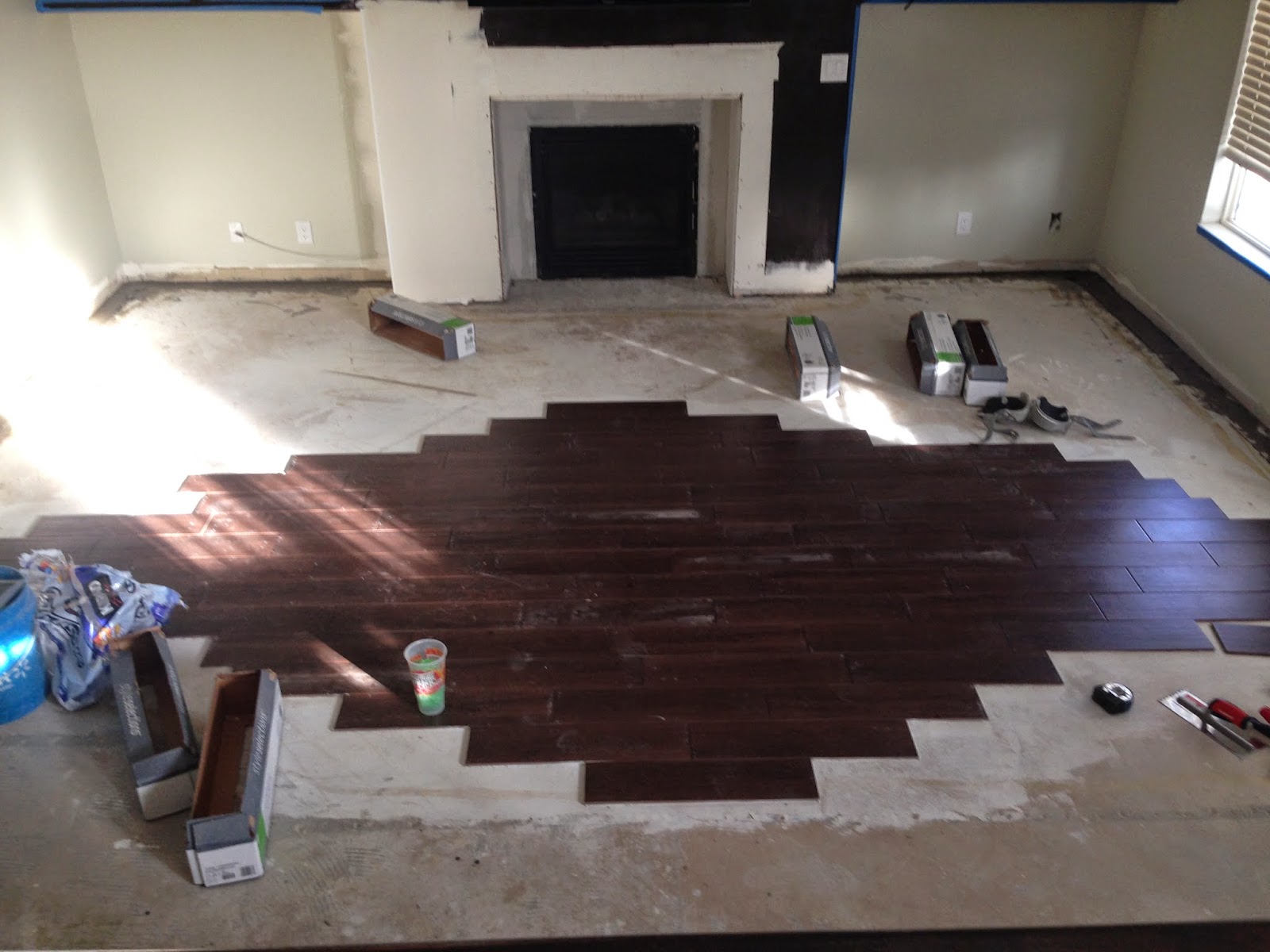 For the main living areas, we chose to go with porcelain tiles that looked like wood. That way, we'd get the durability of tile, but the look of wood. Also pictured here is the fireplace. If you look at the before pictures, the surround to the fireplace wasn't symmetric, which bothered us. We had J's dad build out the drywall so that the look was even.

The long anticipated post about our new house is finally here.

As a Realtor, my morning usually begins with me eating breakfast while I browse homes on the MLS. Most of the time I'm looking with a particular client in mind, but sometimes I'm simply looking at the market so that I'm familiar with current conditions. The morning of September 4th was no different. I was browsing around, mind half on what to make for dinner that night when a listing caught my eye. I was immediately intrigued. We'd been thinking of moving for a while- I really wanted a garage, and I wanted the kids to have their own bedrooms. I was not sure why this house in particular intrigued me so much. Yes, it had a 3 car garage. However, the lot was about half the size I wanted, it only had 4 bedrooms, and it was about half of the anticipated budget of the new house. It also was significantly smaller than I wanted- I wanted a house with at least 3500 sq feet, and this one was only about 2300 sq feet, which is 200 feet bigger than our current, incredibly cramped house.

It was a HUD home, and had been foreclosed on twice in as many years. Since I have the awesome luxury of having all four kids in school, I drove over to look at it. It was the typical "Utah Mushroom", which is a multi level. Kind of an updated twist on the "tri-level" that was all the rage a few years ago. Yet something about the house called to me. The house was filthy, and smelled very, very bad. The paint was atrocious. I still saw potential though.


This just SCREAMS potential, right? Well, to us, it did. We had both sets of parents walk through- with J's dad being a contractor and my dad owning an HVAC company, I knew they could determine whether structurally and mechanically it was sound. They deemed it to be not that bad. So, with less thought than I've put into some family dinners, we made an offer for the property. With it being a HUD home, there were all kinds of fun and different paperwork to do, but we got word the next day that our bid was accepted. Getting financing wasn't particularly easy. The appraiser, astute fellow that he is, noted that the house was missing flooring in the front room and the family room, as well as all major appliances. He noted that as a livability factor. Normally if there's livability factors, you have to get a special type of FHA financing. We didn't want to do that because then we'd be stuck with mortgage insurance, and we definitely didn't want that. We were able to convince the underwriter to let us close, and then have the appraiser come inspect the house 10 days after closing to confirm that there was flooring in those two areas, as well as a fridge, dishwasher, microwave and stove. This was deeply inconvenient because we had to tear out all of the flooring. I didn't want appliances in the house just yet. Plus, about a week after we closed, J was scheduled to go to Europe for two weeks. Nevertheless, we were able to fulfill those requirements. We closed as scheduled, and were able to show the appraiser that we had appliances in the kitchen and flooring in the main living areas. Jim jetted off to Europe, feeling bad that he left me with such a mess.
at 7:50 AM No comments: