In the past, I've always seen the coming of winter as the end of outdoor adventures outside of sledding until spring came. I still am refusing to run in the snow. A couple reasons: It sounds even WORSE than running in heat, the air quality is so bad that I think I'd be poisoning myself and lastly, I'm afraid of the trail not being groomed. 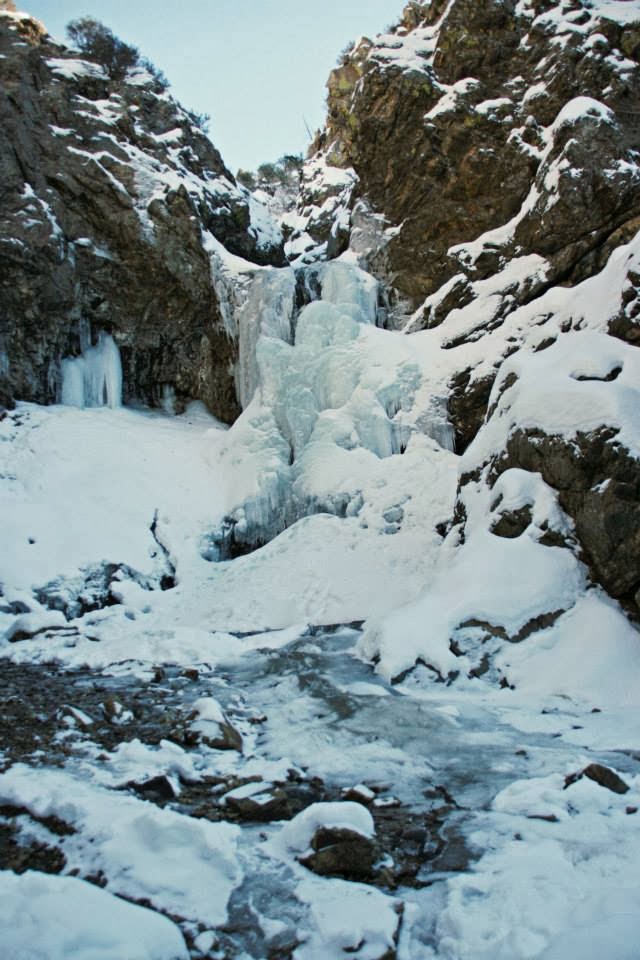 A couple weeks ago, J brought home some crampons. Stop giggling- they're not what you think. Crampons are those spiky things that you put on the bottom of your boots/shoes to keep you from slipping on the ice. He suggested we go on our favorite hike- to Adams Canyon. It was 12 degrees, and I'd donated blood the day before, so OF COURSE I said that I'd be happy to go.

It ended up being much funner and warmer than I anticipated. The views were spectacular, and quite different from the summer/fall views. I had trouble with my crampons though- they were a ladies' size 6-10, and it turns out they're closer to the 10 side than the 6 side. 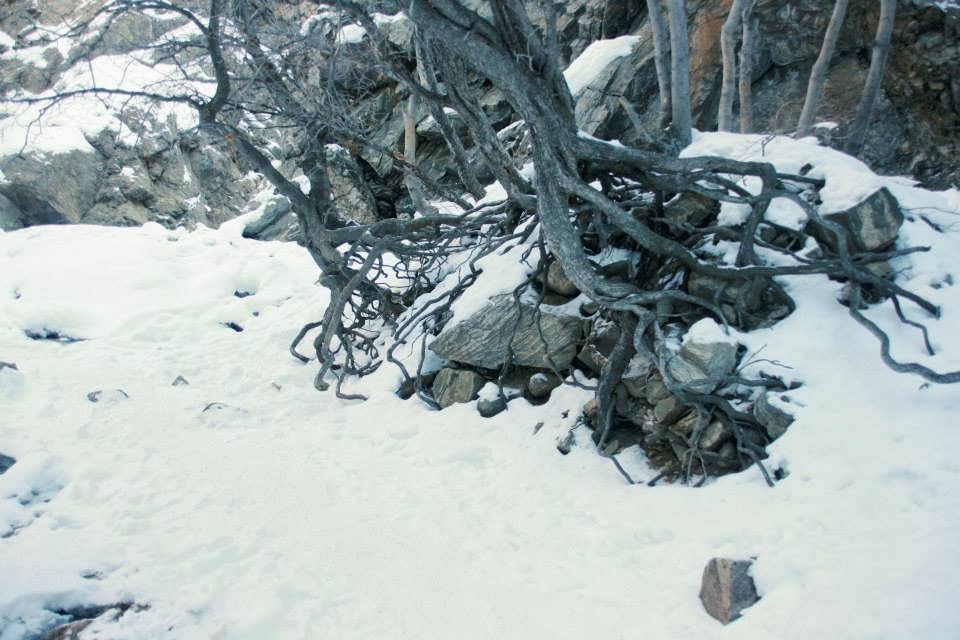 Last weekend, J went to the outdoor retailer show, and he bought us higher quality crampons. Mine were sized ladies' 5-7, and this time, I had zero trouble with them. They were really handy.  The second hike, we went on the Malan's Basin trail. We didn't go all the way back to the basin- most people are stopping at the look at the view from Malan's Peak (I think that's what it's called, but I'm not sure). M came with us. 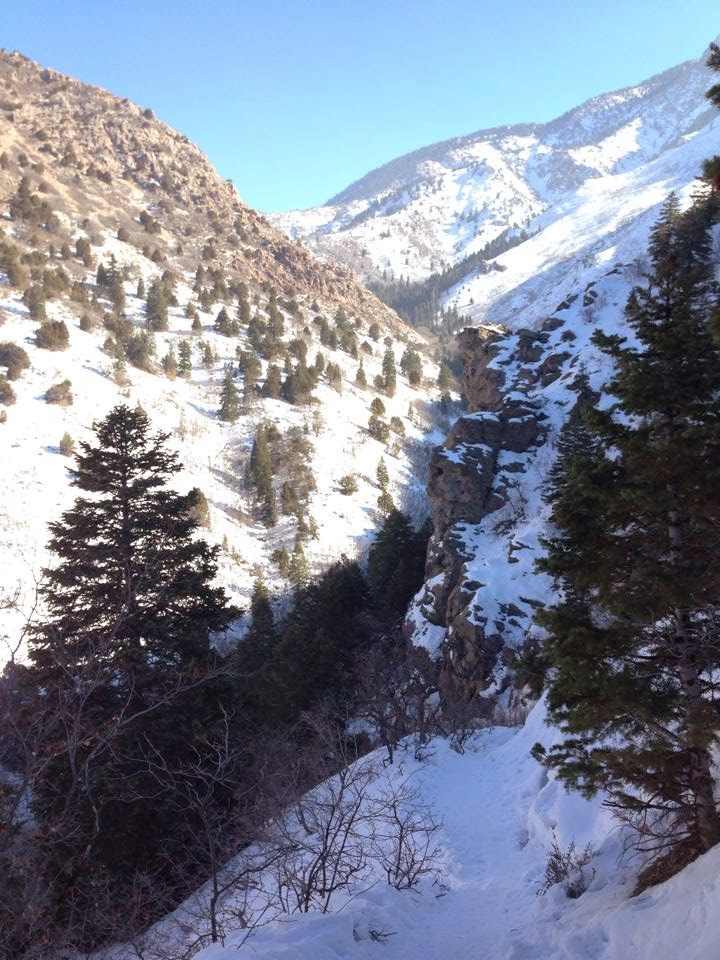 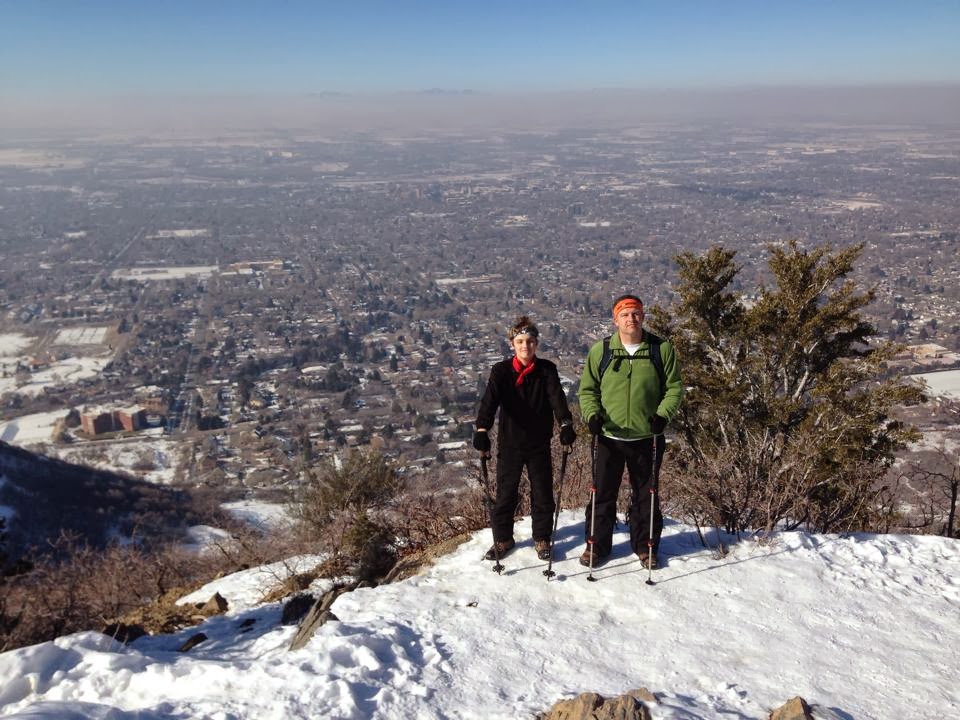 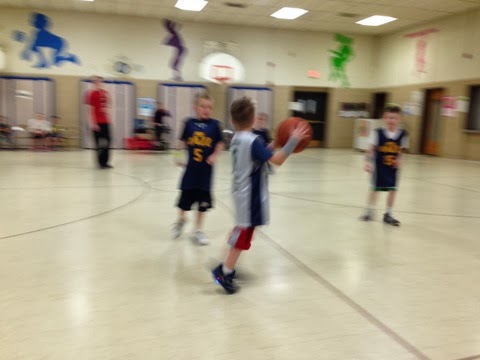 We signed S & Z up for Jr Jazz Basketball through our city's rec department. It's really a great deal- we pay around $50 per kid, and that includes playing games/practices twice a week for a couple months, a jersey (not fancy, but it's still a jersey!), and two tickets to a Jazz game. We bought a couple extra tickets to the basketball game (Jazz vs Chicago Bulls) so that we could go as a family. At the last second, we got an extra ticket, so we took our nephew along. The kids all had a blast, and the Jazz won, which was exciting. 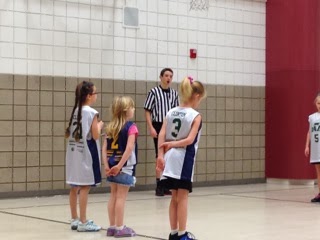 The kids play their last games tonight. I think they're sad about it. They've had such a wonderful time, and have made pretty dramatic improvement. I don't think either of them are going to play professional ball, but they had a lot of fun, and that's what really matters. S really has great hustle, and she's truly a joy to watch. We've actually had other parents approach us and say how amazed they are at how quick and tenacious she is. It's really pretty amazing to watch because she is so much smaller than most of the other girls. 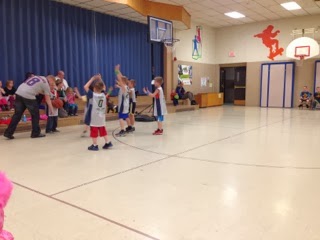 While Z has a good time, he tends to drift off into his own world, which can actually be more entertaining than watching truly excellent playing.
at 11:47 AM No comments:

It's ironic: The more that I have interesting things to blog about, the less time I have to ACTUALLY write about them.  At this point, I'm going to give up on actually telling everything that's happened the last couple months, and just to to recap. In addition, I'll add "blog more in 2014" to my resolution list. 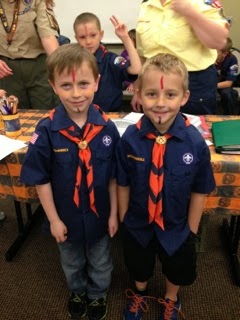 Z became a Tiger Cub Scout. I think he's really enjoyed going to meetings. He got his Bobcat Award.


K went to homecoming with her boyfriend. 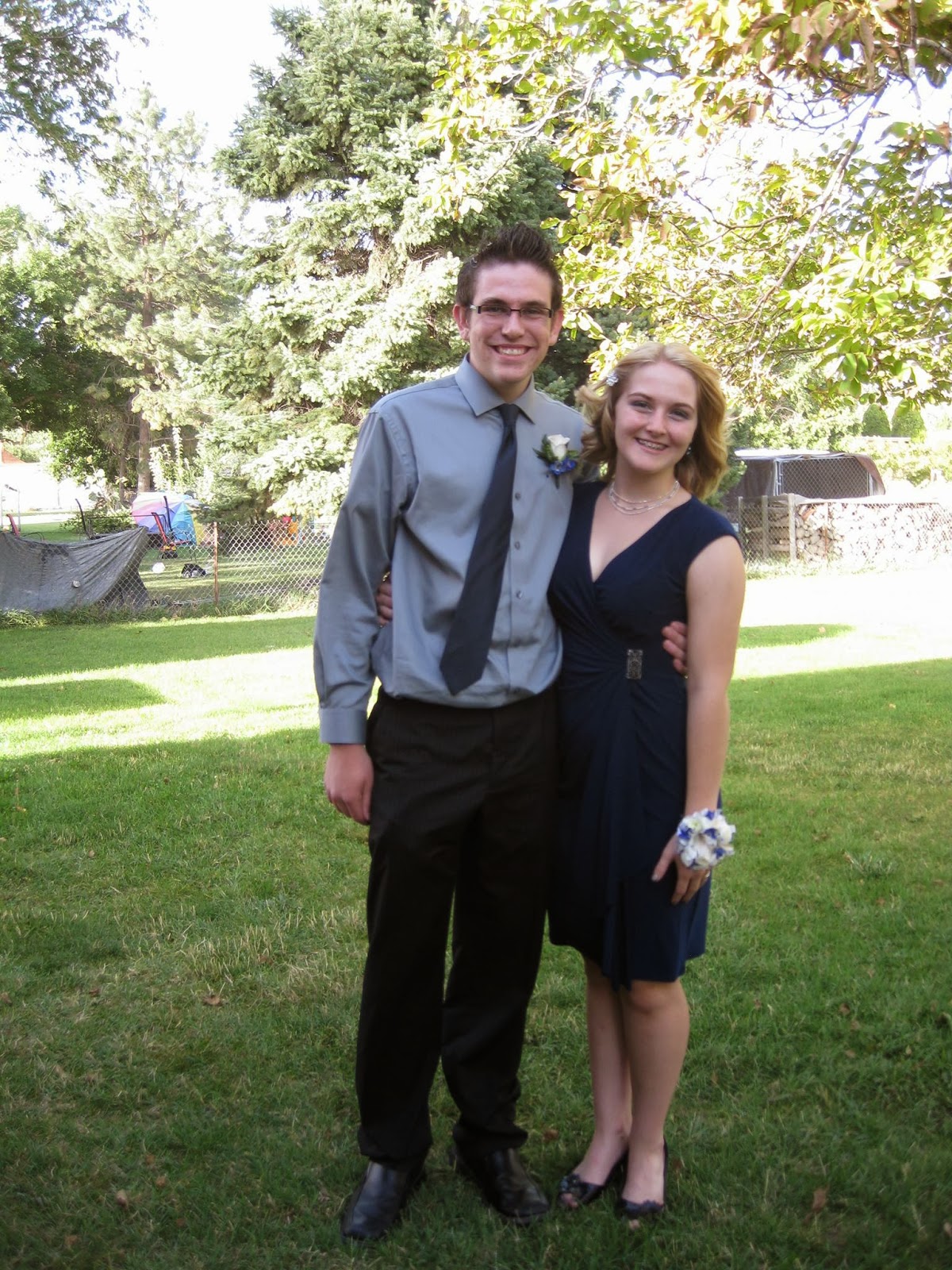 For Halloween, Z was a ghoul of some sort, S was a fairy (I sewed the costume, thank you very much!), M was Jack Frost (I attempted to do the frost design on his hoodie) and K fell back on her Super Girl costume. J and I dressed up as meth addicts. 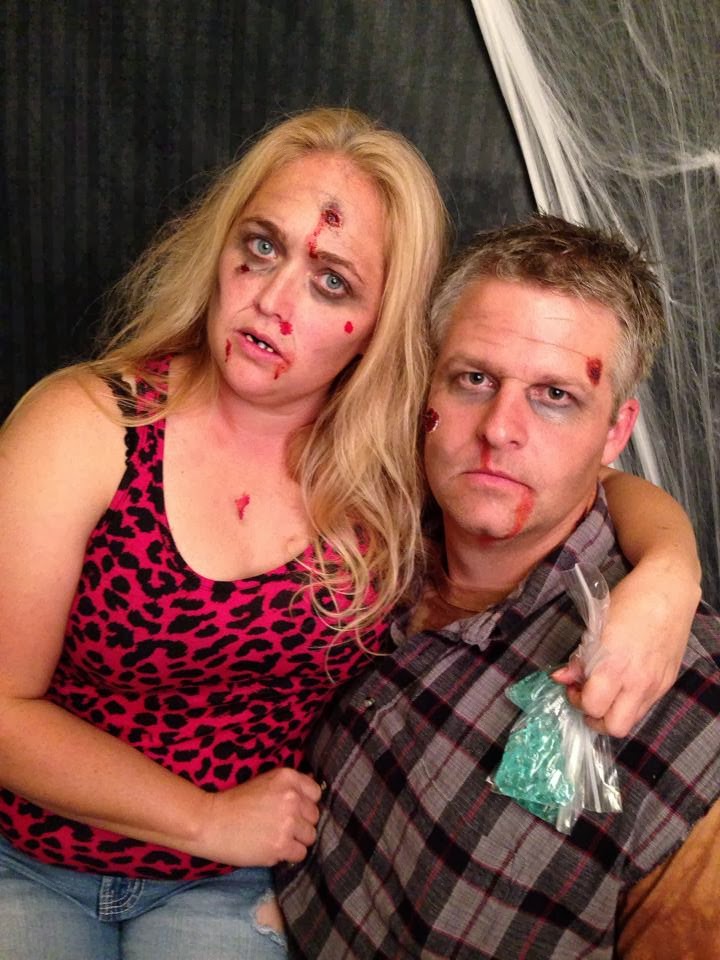 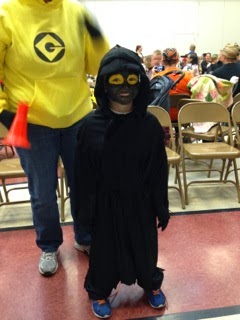 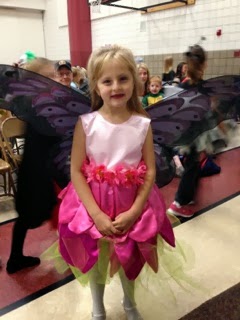 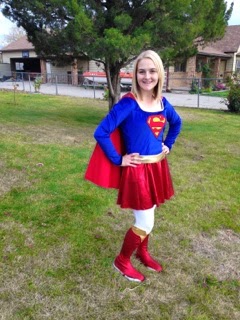 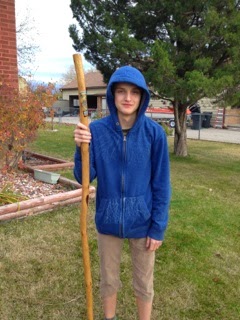 I got my own office (admittedly, that happened at the tail end of 2012). 2013 was my best year yet. I hope that 2014 will be even better. I'm wanting to paint the walls, and make my office look like I actually have decorating taste. 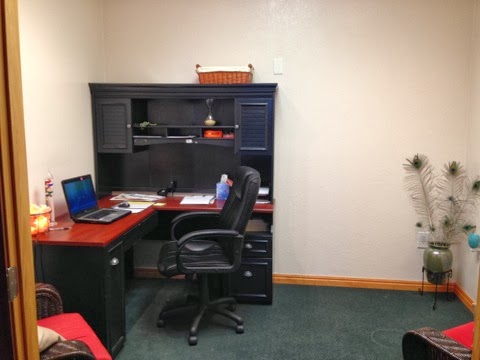 In Dec., S participated in the third grade economics fair. She chose to make bath bombs, which were a hit! 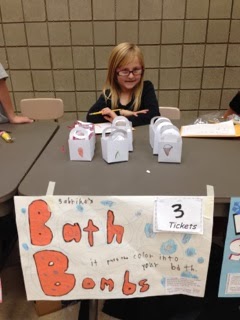 We have said for a while that we wanted to move to a bigger home. A couple things had to happen first. First off, we had to pay off all debt other than our mortgage. We accomplished this goal this past summer, which was an incredible achievement for us. Secondly, the cows had to go to freezer camp.  Freezer camp day has been set: February 21. So now, we're starting to really focus on things we need to do to get the house ready for sale. One of the big things is to remove the remaining popcorn on the ceilings, and retexture the kitchen ceiling so that it matches the front room. 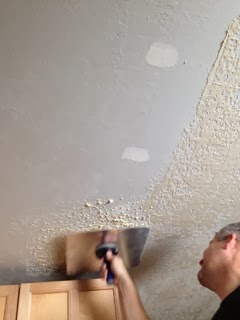 We also need to do some major de-cluttering, as well as some painting. I think we may need to replace the carpet in our room and S & Z's bedroom. The idea of getting a house that fits us sounds unbelievably wonderful.
at 11:35 AM No comments: