Thanksgiving in the ER

Ok, that's probably overdramatizing it a bit- we were only there for a little over an hour.

The day started out innocently enough. We went to our first Thanksgiving dinner at my SIL & BIL's- Erik & Nykki. We had good times, great food, wonderful conversation. The kids had a ball playing with their 10 cousins, and the grownups watched football and played "Bang", a card game.

As I was cutting up my beautiful pies (I cooked 8 yesterday- 4 pumpkin, two cherry, one blueberry, and one apple), I heard a screech, and S started screaming and crying. She was playing with the reclining chair, and got her finger caught in one of the scissor type things. So, it was pinches AND cut. J brought her upstairs so I could look at her. Her middle finger was beginning to swell, and was bleeding like a stuck pig. We decided she needed to get it looked at. Unfortunately, all of the instacares and my beloved IHC Kidscares were closed on the holiday, so I reluctantly drug us to the ER.

I'm somewhat anti- ER because you usually end up spending hours and hours there, there's tons of people with swine flu now, and it costs waaaaaaay more than an instacare. But, it looked like that was our only option.

I have to say I was impressed with the staff at the new IMC ER. They were all very sweet to S, and efficiently professional. Best of all, we were in and out of there in less than an hour and a half! Amazing!

Here is S pretending to be the #5 smilie face on the 1-10 pain scale (Look at that chart behind her if you don't know what I am talking about. When we first got there, she was the orange smilie (#8), but as we hung out in the room for a few minutes, she downgraded herself to the 5, and was trying to imitate that smilie. 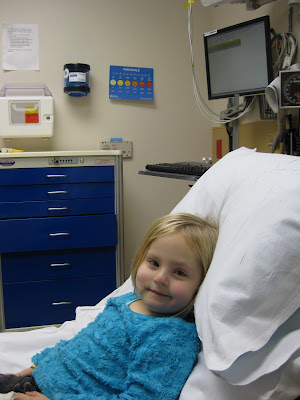 They did xrays, and determined that her finger was NOT broken. I was a little surprised because it looked really swollen and she wasn't wanting to move it. The doctor decided to use one stitch to stitch her up.

If you want to see the wound, you can CLICK HERE to see it. Some people have weak stomachs, so I'll make it a clickable link instead of just posting it out there. Oh, and don't mind that scary looking bruise on her palm. That's blueberry pie juices. S was very afraid she was going to miss eating pie, that there would be none left. I didn't take that picture until after she had the pie safely in her belly.
at 9:35 PM 1 comment:

I feel bad that I haven't blogged in so long. Part of the problem is that I decided to give up ALL soda (including my beloved Mountain Dew) for the month of November. This has made me indescribably cranky. Nobody wants to hear me rant on and on about how hateful and angry everything makes me when I'm going through withdrawals.

Then, just when I was thinking I wasn't going to have to murder someone, my older laptop started contemplating suicide. We decided to get out while the getting is good, and bought a new desktop. It's really super nice except one thing- it doesn't have any of my photo editing software, and I can't get any of them to transfer over. My darling, sweet, wonderful husband is trying to work with it, but it may be a compatibility issue- our new computer has Windows 7, and I've heard a lot of older programs won't work with it.

On the interesting front, they are putting in another power line near our house. I always wondered how they go about doing that, and I've been able to discover their secret weapon: HELICOPTERS! 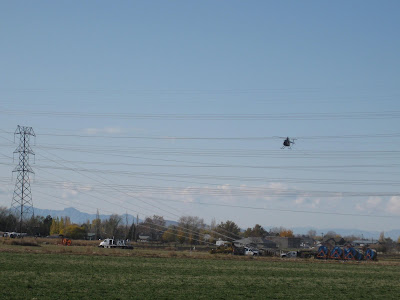