When J was a kid, he broke his right big toe while jumping on a trampoline (a trampoline injury you say? INCONCEIVABLE!!!).  Fast forward 30 or so years, and he's taken up running. That toe has always bothered him a little, but it has gotten much worse since the running thing.

He saw a podiatrist a couple weeks ago, who did some x-rays and said that it looked like there was a minor bone spur. He said J could try orthotics or have a cheilectomy done. J felt like he'd like a more permanent solution, so he opted for the surgery. A cheilectomy is basically just shaving the sharp part off of the joint. The doctor felt like J's case was fairly mild, and didn't see any other complications. We scheduled the surgery for today. Since he'd already planned to take all week off work anyway, it was very convenient. After scheduling the surgery, J noticed a sharp decline in his toe, and was feeling a lot more pain. I noticed he was favoring the foot more. I'm not sure why it suddenly got worse- maybe it was mentally accepting there was something wrong and not blocking the pain as much?

He had the surgery done today. He opted to have the deeper sedation so that he wouldn't wake up partway through the procedure. The doctor said it would take about 45 minutes. It ended up taking a bit longer. It turns out things weren't quite as simple as the x-rays showed. I will now explain in laymen's terms what they found and what they did. I'm totally doing this because all of my many readers (ha ha) would prefer it that way, and NOT because I can't remember the technical terms.

They found he had a flap of cartilage loose, and flapping around. This would cause some trouble. They ended up cutting it off, and drilling around the bone to encourage growth of new cartilage/scar tissue. There was also a minor bunion repair, and the bone spur was significantly larger than originally thought. He also saw some signs of arthritis. The doctor stressed that this wasn't a permanent fix, but it should make for a dramatic improvement for a good long time.

They have a pain pump somehow inserted into the wound (maybe as an IV or something? His foot is all bandaged up, and I've been instructed not to unwrap it, dangit). The pump gives a continuous flow of a local numbing anesthetic. If he starts to feel pain, he can press a button and get a bollus (or extra boost) of the numbing medicine. A home health care nurse will be coming by Friday to remove it.

So far, his recovery has been great. He's just hung out in our room, watching tv. He's threatened to get a bell so he can ring the bell to get my attention/annoy me. He's been a great patient so far, willing to stay down. I guess this means he's in more pain than he's letting on, as inactivity drives him right up the wall. I'm thinking that by Thursday or Friday I'll be having to bungee cord him down.
at 9:04 PM No comments:

I just wanted to write you a letter of appreciation for all of your hard work. I know that I haven't always given you proper appreciation. I know I wasn't happy with you when we discovered that it was you who helped my toddler hide my keys. Having that open hole was just too much temptation for a 2 year old, and she crammed the car keys in there, and you remained silent on the issue.

However, you really, really helped me out on Friday.  Friday morning, I jumped in the shower first thing in the morning, and noticed that we ran out of hot water much sooner than I would have expected. I wondered if the kids had messed with the temperature dial (this happens at least once a month), and made a mental note to go check on it. Unfortunately, the morning was crazy, as we had an extra kid in the house, and I had a 8:45 meeting to get to after I got S dropped off at school.

I went to my meeting, got Z dropped off at Grandma's, and went to a Realtor Christmas lunch. There, I won a month of MLS dues paid for. Yay! I got the kids picked up from school, and got home around 2, about 7 hours after I'd left for the morning.

M goes downstairs because he's starting to go through video game withdrawals, and hollers up that there's water downstairs.

I get down there, and sure enough, there's an inch or so of water pooled by the basement steps. It's only gotten about a foot of the way into K's room. I open the door to the utility storage room. I discover that the pressure relief valve/pipe is POURING water. Fast.

I hurry and turn off water to the house to end it quickly. I call J, upset. Unfortunately, he's now in a carpool at work, so he can't just take off and leave work early anymore.

I grabbed you, dear shopvac, out of the shed. Empty all the crud out into the garbage can, and then haul you downstairs and get to work.

I had to empty you of water at least 10 times. I lost count after that. I was feeling lucky that it seemed that only the utility room seemed to be flooded, except that tiny part at the bottom of the stairs. I'm also feeling lucky that J and I had mostly gotten that room cleaned out around Thanksgiving, so there wasn't much on the floor. I begin to realize that water keeps coming out from under the wall that separates the utility room from the freezer storage room.

That storage room has NOT been sorted through in a while, and things were getting very bad and out of control there. There was tons and tons of stuff on the floor. I was afraid to go in there, but I eventually got up the courage.

Hooboy. This is where most of the water went. About 3/4 of the room has water on the floor. Luckily the area around the freezer was totally dry.  I got the kids to help me take all of the

By the time J got home from work, the floors were mainly dry, and I was trying to empty out the cardboard boxes. He looked at the water heater, and declared it to be an easy fix. He ran to the hardware store, and had the water heater fixed within 10 minutes.

We'll lose a lot of books and some papers.  There's also some lost photos, but nothing too valuable or important. A lot of our outgrown kids clothes got slightly damp, but I've sent them through the wash. 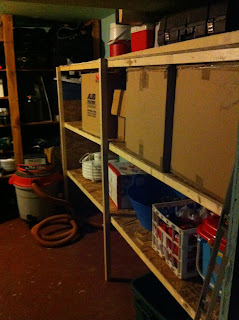 Yesterday, J built me a new set of shelves to go in the freezer storage room. I plan to sort through everything and throw away and/or donate a lot of stuff. Anything that will be on the floor will be in a rubbermaid tote so that it'll be safe it we ever have another water incident.

I feel very lucky because we didn't lose anything important or valuable. Plus, we've been married 16.5 years, and this is the first time we've ever had any kind of water/fire/sewer/wind disaster.
at 7:51 AM 1 comment: 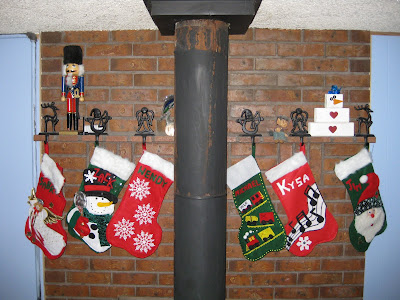 This is our mantle and our Christmas stockings. I made mine, M's and K's completely from scratch. I had some help with the other three.

I think my very favorite is K's. She thinks it's unfair that hers is soooooo much better than the others.
at 5:36 PM No comments: 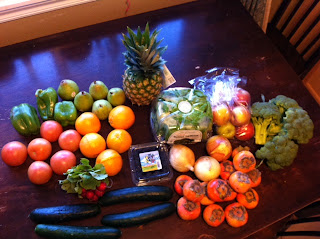 Because fall/winter has officially set in, and I no longer have fresh fruits and veggies coming from my garden, I decided to order a Bountiful Basket this week. They also had a great deal on gingerbread house kits, so I was excited to pick up my order. 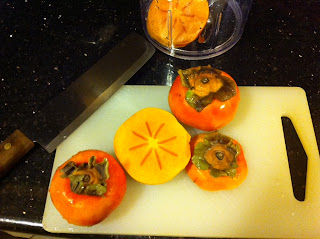 In my order, there were quite a few fuyu persimmons. I'll admit that I'm not too familiar with the fruit. I saw them growing all over the place in Japan, but I never actually ate one there. I have a friend here with a persimmon tree, and she gives me a couple fruits each year, but we just eat them and move on.  I got so many in the basket that I knew I was going to have to do something different with them. 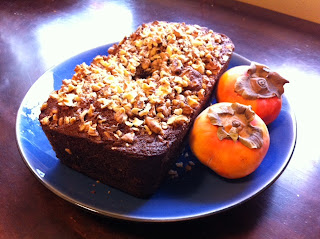 I found a recipe for Persimmon Bread, and I decided to tweak it a little bit.  I was quite happy with how it tasted- it tasted like a sweet/quick bread with a nice spicy undertaste.

Mix all ingredients together except for walnuts. Pour into a well greased bread pan. This is prone to stick, so putting some parchment paper in the bottom wouldn't be a bad idea.  Sprinkle the walnuts on top.

Bake at 350 for 45 min-1 hour, or until toothpick inserted comes out clean. 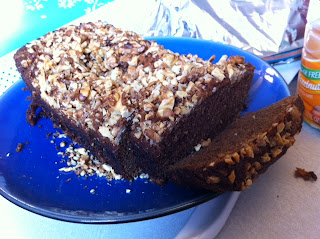 I used walnuts from my tree for this recipe, and so I had to shell them before I could use them. I also made the bread after the kids went to bed, so I had to shell them myself. What a pain! No wonder I usually make them do it!  I did notice if you crack them a certain way, the walnuts make a cute heart shape.  It wasn't enough to completely win me over, but it did make me a little less annoyed.
at 7:43 PM No comments: