One of my very favorite places on earth is Zion National Park.  We've been trying to go every year, and this year we actually were able to go. Last time we went, in 2013, we'd planned to hike the Narrows again as a family, but flash flooding levels were so high that we didn't feel it was at all safe, and the weather predictions were that a flash flood was "likely". We were disappointed, but felt like we were making the safe choice. 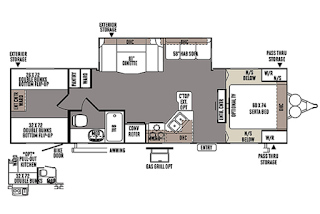 This year, we were so excited to take our new travel trailer out. We sort of accidentally sold our beloved 2006 Keystone Outback Bunkhouse. We'd been toying with the idea of upgrading to something a little bigger, and everything fell into place, so we are the proud new owners of a 2014 Rockwood 2905SS. It still has the double bunk beds in the back so that all of the kids share a room, but get their own bed. It has a side slide, which  makes for more "living" space. We got memory foam toppers for the kids (costco) and cut them down to fit their pads so that they had more comfortable beds. They were pretty thrilled with the upgrade.

This trip was our second time out with it. 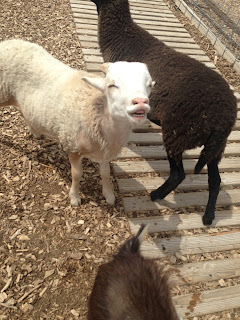 We managed to get out of the house only an hour or two after we planned. Considering we're still in the stocking process, I thought this was pretty good.  We made great time. We always stop at the petting zoo in Scipio for a rest break and so we can play with the animals. One of the funniest things we saw (because I'm a 10 year old boy) was a sheep attempt to drink another sheep's urine, right as it came out. It then stopped, turned to us, and made this face. 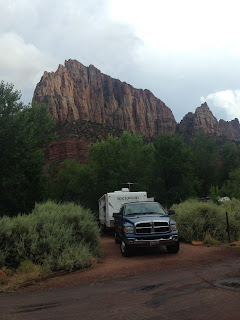 We like to stay at the Watchman Campground. It's within the national park, but still very close to Springdale. Our camping spot is within walking distance to both the town and the park shuttles, so once you park your trailer, you really don't have to drive at all unless you want to travel into the less populated parts of the park. I spent Thursday evening meeting with a client in the Washington County area, so missed the hilarity of the family going to pizza in town and pointing out various part time jobs we could work if we chose to move there. 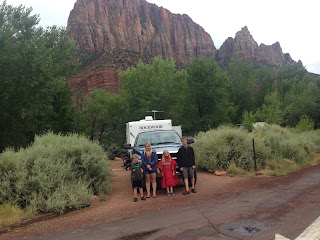 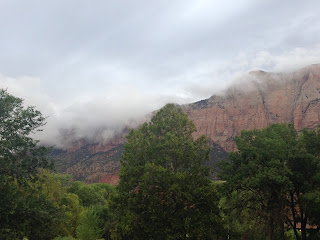 We originally planned to hike the Narrows on Friday because the weather is unpredictable, and didn't want to put it off. However, that night as we went to bed, the sky opened up and it rained all night long and into the next day. We didn't want to do the hike in the rain, so we put on our rain gear and wandered around the park, helping the little kids earn their junior ranger patches. 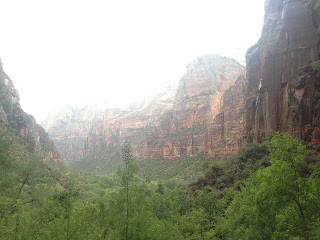 Saturday dawned much brighter and sunnier. The water was the color of chocolate milk- zero visibility. Yet ironically enough, the flow was significantly lower (80something vs the 120something it'd been the day before). We decided it was the time, and set off.

We all had at least one trekking pole each, camelbacks, waterproof bags for our camera phones. On our feet were Keen water sandals. They don't give ankle support, but they really protect your toes and feet. We also all wore clothing that would dry easily and wick water away from our bodies. We kind of laughed at some of the tourists who were wearing crocs and trying to walk in the thigh deep water with their iPads. The navigating was easier than I remembered because the flow was lower and the water seemed not nearly as cold. However, zero visibility did make it difficult. 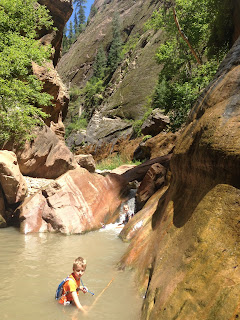 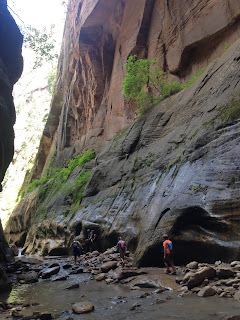 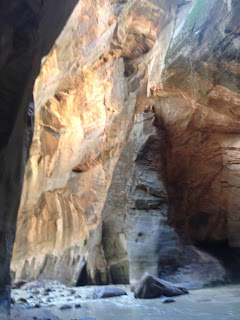 We got about 2.5 miles up the Narrows and got to the Orderville Canyon turnoff. We hiked up that for a good way. After a while though, it gets to a point where you have to climb quite a large boulder to get to the next section. I could tell our younger kids were tiring, so we decided at that point to turn around. I thought when we got to the junction again, I could talk one or both of the big kids into going up a bit further with me- at least to Wall Street, the best part of the hike! But no. I was outvoted 5-0. -sigh-

We got back to camp and had a relaxing evening. 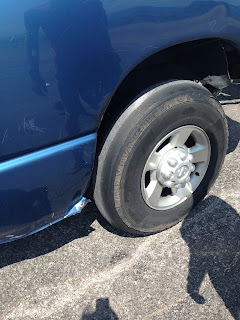 The next morning, we packed everything up and headed home. Unfortunately, about 25 or so miles south of Scipio, we heard a scary thump and J nearly lost control of the truck. We pulled over and discovered the tread had come off our rear driver side tire. It was still holding air, and we could see a ranch exit about a mile up the road, so we carefully drove in the emergency lane so that we didn't have to change a tire while the cars flew past at 80+ miles per hour. We got off the road and were dismayed to realize how much damage had been done to the bed of the truck. Lucky for us, other than losing a drain cap and getting a couple smudges on the trailer, it was fine. Even more luckily, J had kept control of the truck, and nobody was injured.

We immediately got to work. M started getting the spare down while K helped get out tools and start jacking up the truck. We got the spare out, and it looked a bit dodgy to me. Not only that, but it was flat. We made the further discovery that our air compressor that is normally in the trailer hadn't made it out to this one. Yay! We did have a bicycle pump though. 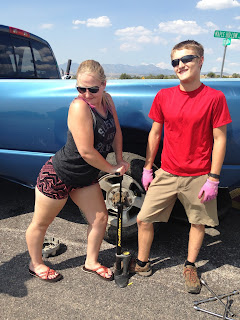 We got the new tire on, and took turns pumping- 10 psi per person. A couple cars passed us while we were working, and I encouraged K to pump in an "attractive" way to get people to stop. J was working on putting the blown out tire back up the truck, so if someone came, I'd yell at him to hide so it'd look like there was no man around. I'm not sure if he found my antics as hilarious as I did. We got the tire to 50 psi but it wouldn't go further. So, we drove slowly and carefully to the next town and bought air to fully air it up.

Unfortunately, it being a Sunday afternoon, there was no way to buy a new tire, so we had to make the rest of the drive home. I'm happy to say we got the rest of the way home without incident. It was not how I envisioned the drive home going, but in hindsight, it was wonderful to see how well we functioned as a family. There was no sniping, no snarky comments, no meanness, and no complaining. The big kids immediately jumped in to help. The little kids stayed out of the way once they got to see the damage, and contemplated whether or not we'd have to ride our bikes home. There were quite a few laughs. Nobody lost their heads and everyone stayed cool (metaphorically) and collected.