We actually have been on two trips to Zion recently. We took the whole family in the RV at the end of July. The kids absolutely loved it. I was really impressed at their mad hiking skills. We were going into the Narrows, and figured we'd go in a bit, and then turn around. We made it all the way to Orderville Canyon, and then walked to the waterfall at Orderville before turning around. All told, we walked almost 8 miles that day, and the kids didn't complain once. When we were about 100 feet from camp, Z did ask to be carried. I was so impressed with them.

Then, J and I decided to go back to celebrate our 17th anniversary. This time, we decided to tent it. I have to admit that I haven't gone tent camping in 6 years, so I was a little apprehensive. It was nice to sleep under the stars (we kept the rain fly off, so we could see them), and it really was fun. For a long time, it's been on J's bucket list to hike The Subway from the top down. We managed to win the last minute lottery, and got a permit for Friday. 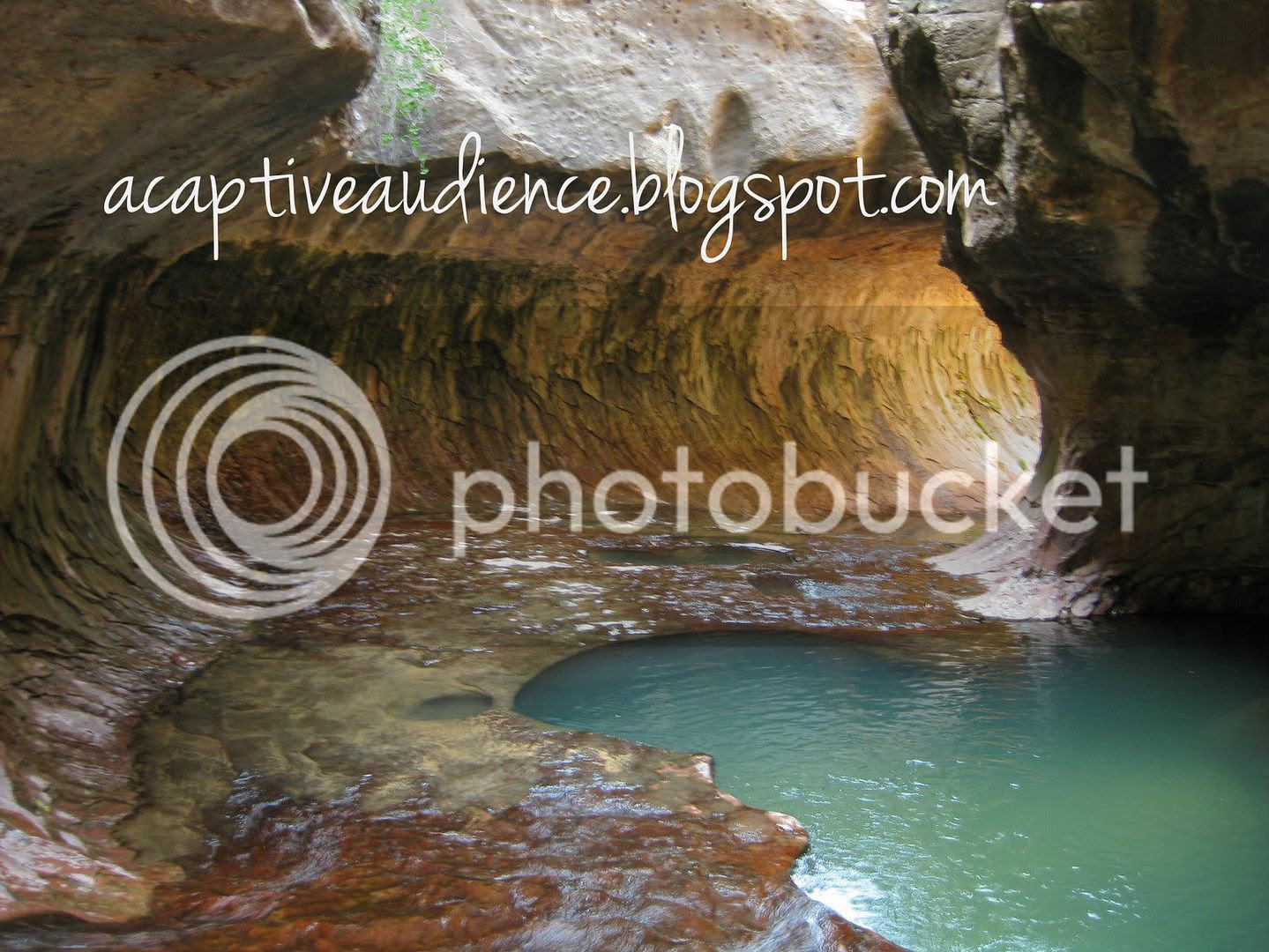 The Subway is a 9.5 mile hike that has a 2000 foot elevation change, three rappels, bouldering, and some required swimming. It's rated as 3B III.

The problem with the Subway is that there's two parking lots, 7 miles and 2000' elevation difference between them. People have two options: they can hitchhike, or they can pay for a shuttle. The shuttle cost $30/person, which offended me. We decided to take our chances and hitchhike.  The night before, we found a group that also was planning on going, and we got them to agree to give us a ride from the bottom lot to the top lot. 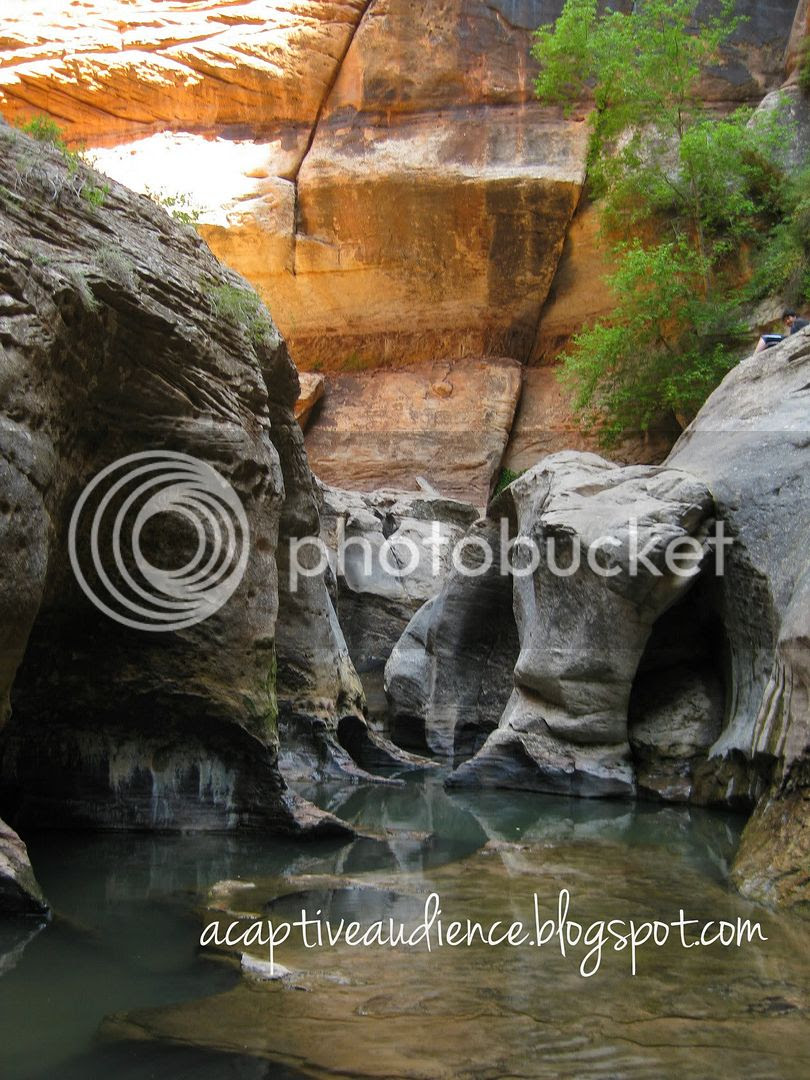 They ended up being a really fun group of people, and we did the entire hike with them. It came in handy for them because nobody in their group brought gloves, which are really, really, really nice when rappelling. Also, their rope was only 50', and for the first rappel, you really need a 60' rope.

I didn't bring my fancy camera, and 95% of the time, I was so relieved I hadn't. This hike was definitely the most intense, most technical hike I've ever done. That would've been tricky to have along. But, there were a couple shots I'd really wished I'd had it. Instead, I brought my little point and shoot in its' waterproof bag. 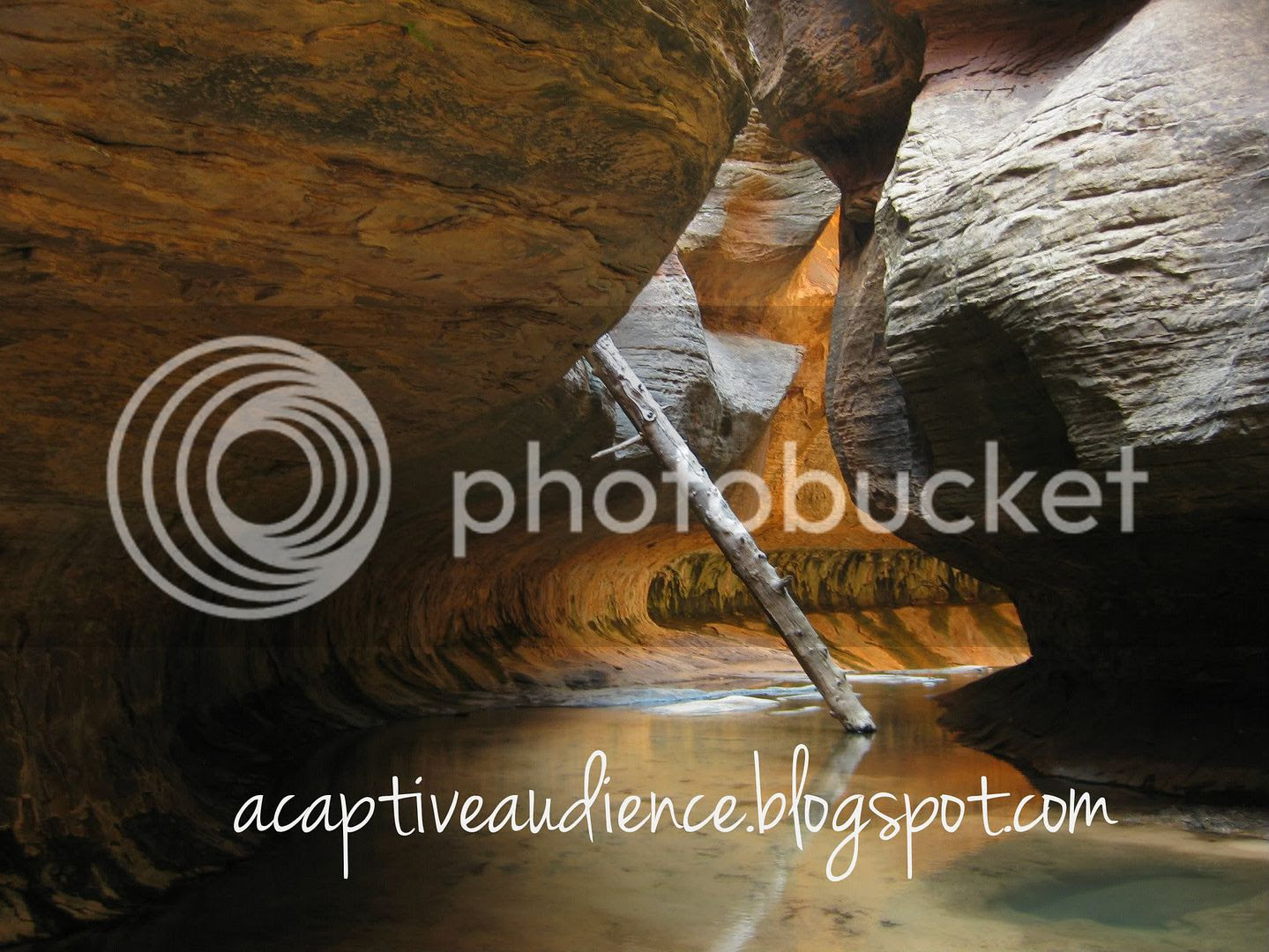 I was nervous about the rappelling, or downclimbing, whatever the experts would call it, but it ended up not being a big deal at all. My upper body strength was better than I thought, and the "obstacles" were kind of fun. The weather was hot, so the water wasn't too terribly cold. I brought 3 liters of water, and ran out about 1/2 mile from the trailhead. We had purification tablets, so if there had been an emergency, we would've been fine.

The views were utterly amazing.


We got through the narrows part, and still had a couple miles to go. There was a lot of hopping around over rocks, which got pretty exhausting. Then, we had to climb about 400' through switchbacks to get out of the canyon. That was rough at the end of the day, and with sun. It was getting a bit cloudy though. In fact, once we got out of the narrows, we started to hear thunder, which made us quite nervous, and we picked up the pace. 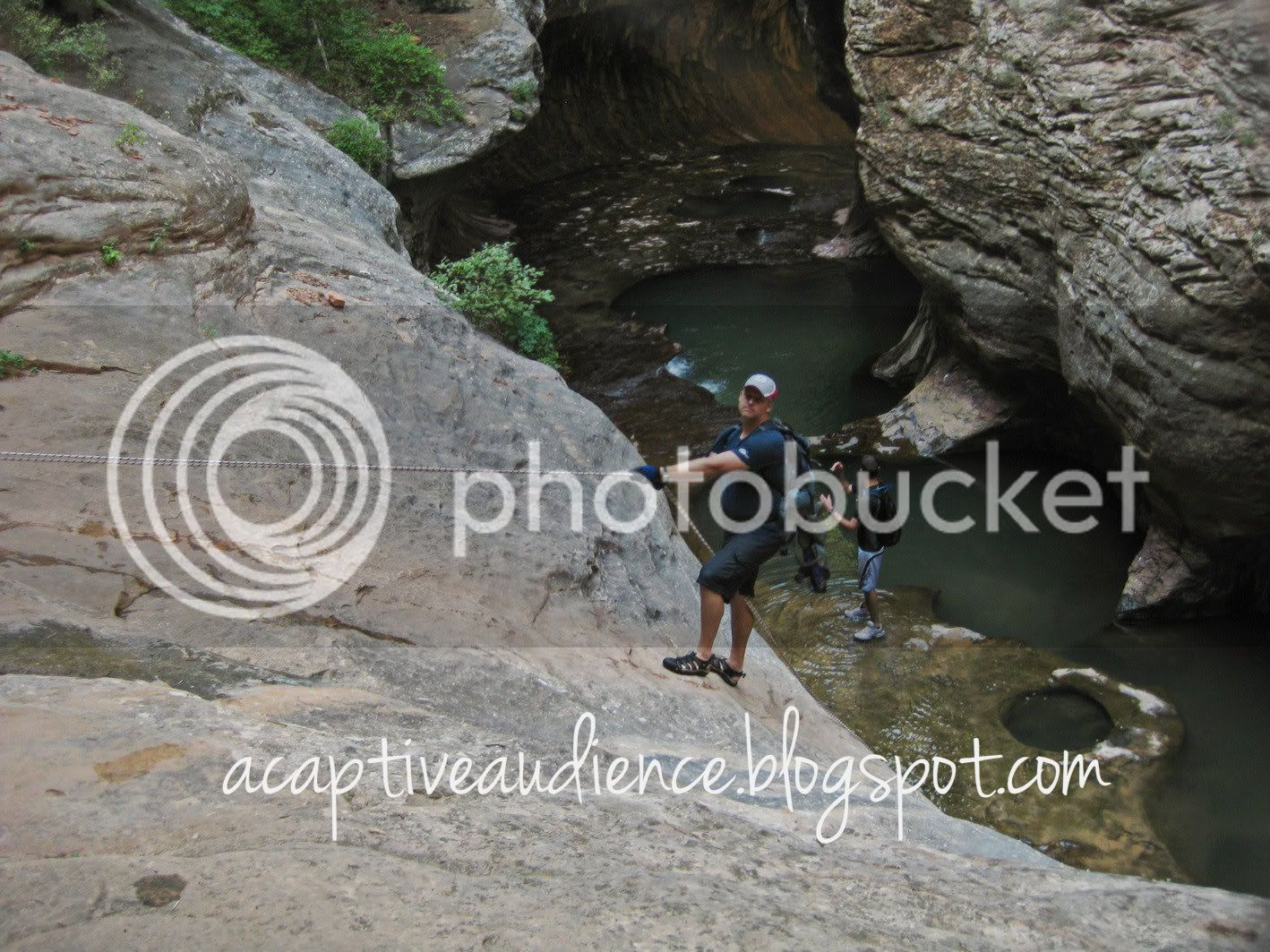 Once we completed the hike, we got in the car and started to drive back to camp. Within 15 minutes of getting in the car, a flash flood warning was issued, and rain started to pour. J and I have always wanted to see the main canyon in the rain, so we hopped the shuttle to go check it out. We saw several new waterfalls, some of which were quite large. It was amazing to see.

The next day, we were both very, very sore in our quads. So, we decided to hike some more!!  We wanted to check out some family friendly hikes we'd heard about, but were unable to find when we had the kids. We found several great ones this time around though.  We ended up checking out the Many Pools hike, as well as the Hidden Gardens and Weeping Rocks hikes.  We also wandered around town a bit.

Sunday morning, we decided to go for a little bicycle ride, so we went on the Pa'Rus Trail. I was a little unsure about this, as I was really, really hurting at this point, but J convinced me, and I'm glad he did. It was a lovely, scenic trail, and it was still fairly early, so it wasn't too hot.

All in all, we had a marvelous time, and are excited to go back next year.

We bought a cow!

Our neighbor has been leasing barn space to a guy who buys day old calves, bottle feeds them, and then sells them or takes them out to his acreage a few miles away.  After a few weeks of watching all the cute calves, and even being able to feed some of them, we made a crazy decision.

We'd buy one. He'd gotten some beef shorthorns in, and they are supposed to be great for meat.

We'd raise it up for 14 months or so, and then hire a butcher to come process him for us.

However, we would never be able to store an entire cow, so we started asking around to see who wanted to split it with us.  We had so many volunteers that we ended up buying TWO.

When we talked to KC, the seller, we had two options: we could buy a (mostly) weaned calf of about 8-9 weeks old for $450, or we could buy a 6 week old for $350. We thought it was worth the extra money to buy the weaned calves.  However, when we tried to commit to that, KC didn't have any left.  The next day, one of his buyers backed out, so we bought one weaned, one not weaned.

I went to the feed store and bought a bottle and calf milk replacer and a bale of alfalfa (J was THRILLED when he realized I'd taken the civic for this errand. Really. I have a giant SUV AND a pickup truck, and I end up in the car for that errant?).

We've set up a dog kennel in the back field because all of the calves will mob you if they see the bottle. We get the calf into the kennel and feed him in relative peace there.

The bigger calf only needs one bottle a night, and tonight is his last bottle.  The younger calf needs two bottles a day. Each bottle is two quarts of this milk replacer (which bears a rather disturbing resemblence in smell and texture to my protein shake.  ugh) 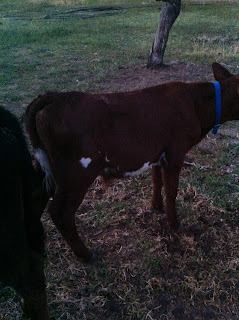 The older calf, Casanova, has a heart on his right flank, and another on his forehead. 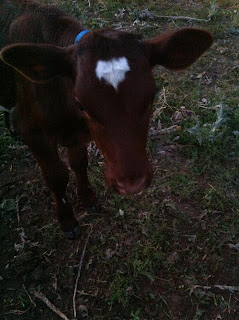 The younger one is mostly brown, with a little white on his forehead.


Both are very sweet, very friendly, and I really hope they aren't quite as wonderful by the time they're grown or I'm going to have a really tough time when it comes time to process them. 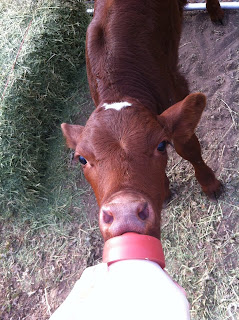 This is a picture I took of the younger one (name not totally decided, but T-Bone and Chuck are front runners) this morning while I was feeding him.

As a fun side note, we took this video a couple weeks ago in the field. J was trying to secure the netting on top of our new chicken enclosure, but the calves were making it impossible. So, he had us come out and distract them. S did a fantastic job, and I caught it on video. We'd wanted to buy the calf chasing her, but we were too slow to commit, and he was sold before we could buy him.