I really don't have too much to say. I'm just sick of having that nasty post be my most recent blog entry.

I have my usual New Year's Resolutions: lose weight, be more organized, get rid of clutter in my life. I actually got rid of a pickup load of stuff in December, so hopefully I can continue the trend in January. As long as I just drop the stuff off at the second hand store and DO NOT GO IN TO BROWSE, I should be ok.

I have managed to not be addicted to Mountain Dew, and haven't had it on a regular basis since early November. I have had it a couple times though- when my throat was healing, the "burn" from the carbonation felt good on my throat. I want to continue my independence from soda.

Although I consider myself to be a fairly decent cook, I've decided I need to experiment a little bit. So, I am hoping to have the first 14 home cooked dinners in December be an unfamiliar recipe.

Tonight we had pot roast. Yes, I do pot roast a lot, but I used a different recipe. Much as it pains me to admit it, I think it was probably the best roast I ever made.

On New Year's Eve, we got together with J's sister, her husband and their kids. It was a lot of fun. We had the kids watch movies and play upstairs while we played Wii, watched the Jazz, and ate ourselves sick. I reinforced my reputation as being terrible at video games. Their dogs chose to stay downstairs with us, and Koda soon regretted the decision. We'd brought party hats because S insisted it was a party, and someone thought it'd be funny to make Koda look festive. 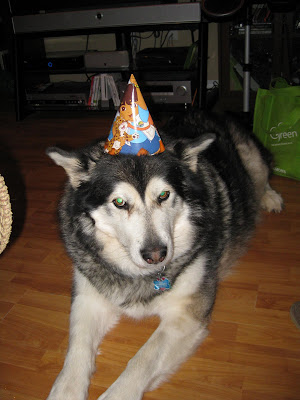 I hadn't realized just how embarrassed a dog could look. Soon after this shot, he chose to go upstairs for a while. 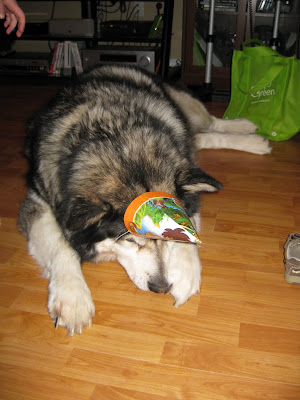