On Sunday night, I watched Julie/Julia. I thought it was a pretty cute movie. It inspired me even more to do some fun cooking. Watching the movie wanted me to try something fancy. I decided I wanted to cook Boeuf Bourguignon. I looked at Julia Child's recipe, but ended up deciding to go with Anthony Bourdain's recipe. I somewhat regret that, since Julia put a bit of tomato paste and bacon in hers, and I think that would've been nice.

It's really quite time consuming. I have to admit that the toughest part was taking Z to the state liquor store and finding burgundy. A two year old in a huge room full of glass bottles at his level is a very stressful thing! After a bit of help from the cashier, we had our burgundy in hand and were out the door.

Here are my ingredients: 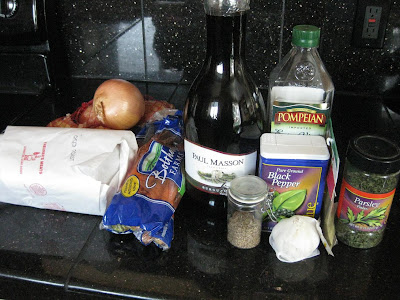 The recipe called for fresh herbs, that are tied up into a bouquet. I had all of the herbs in dried form, and didn't want to pay an arm and a leg for the fresh stuff, so I just tossed in my dried stuff. Next summer, when my herb garden is producing again, I'll try again, but with my fresh herbs.

I used a chuck roast from our lovely, wonderful, grass fed, hormone free, free range, happy cow. The meat was to be cut up and browned before being added to the rest of the ingredients. This is my raw meat. Isn't it gorgeous? 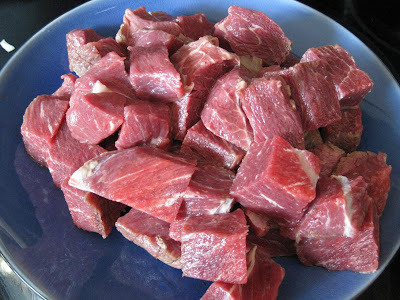 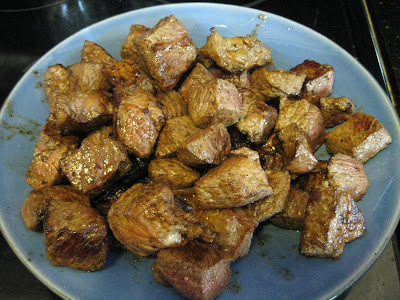 I started cooking around 1pm. By 3pm, everything was assembled, and it was just supposed to simmer in a pot for a couple hours.

At 4pm, the kids and husband were home, and all were immediately nagging to eat dinner because they were STARVING TO DEATH!!!!!!!! The whole house smelled of the bourguignon. Finally, at 6pm, I caved under the constant nagging for dinner, and served it up. 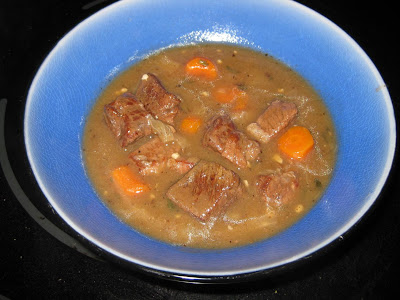 The kids gobbled it right up and loved it. The older two both had seconds. J brought leftovers to work the next day. I have to say the meat chunks were absolutely to die for- incredibly tender, the most tender beef I've ever had. The sauce part of it? I was kind of iffy on that. Given that I am an incredibly picky eater, I'll blame my palate more than the recipe or preparation.

Next time I make the meal, I think I'll do Julia's version because I think the tomato would really add to the sauce.
at 8:47 AM