Last summer, K had really hoped that I would make pickles for her. I planted several cucumber plants, but they didn't produce as much as hoped, and what they did make were bitter. So, no pickles this year.

This week, a Bountiful Basket location was added at the last minute, and one of the add ons was a 38 lb box of pickling cucumbers for $17. Awesome! I knew that would be way too many for me alone, so I asked my sister in law if she wanted to split it. She agreed under the condition I teach her how to make them into pickles. They also had what sounded like an awesome mexican pack, so I grabbed that as well.

It was scheduled for pickup this morning, but due to weather, had to be pushed back a couple hours. J picked it up for me, since I had plans to go to lunch with my mom, grandma and sister. A few minutes after he picked up my basket, I got the following text:

"Seriously. A case of cucumbers?"

I had to totally crack up when I read it. When he'd gone to pick up the basket, they saw my name and said, "Oh, you're the ONE with the cucumbers, huh?" He replied, "No, it wasn't me. That was my wife." I suspect there was some eye rolling here on his part. We'll see who is rolling their eyes when they're enjoying pickles. So out of 100 people who ordered a basket, I was the only one to buy the cucumbers. I have to admit I'm a little surprised. I saw the box when I got home tonight. Holy cow. That is a LOT of cucumbers. And, it came in the coolest, most rustic box ever. 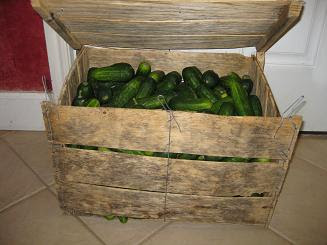 Here is the regular basket contents: 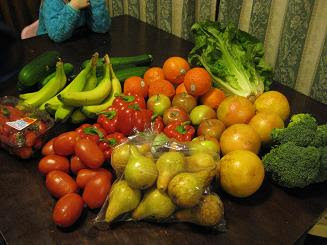 That is really an awesome haul. I'm pretty excited about it. The mexican pack is going to stretch my cooking a bit- I've never used tomatillos before, so it'll be interesting to work with. This is going to sound very dorky, but I loved the colors of the mexican pack. The different shades of green with the white and tan of the garlic and onion looked very pretty, I think. 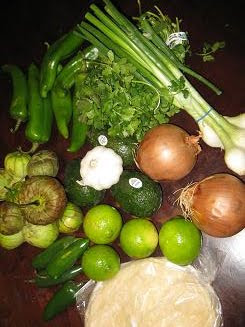