I survived the valentine's parties!

This morning, I helped with M's class party for valentines' day. I discovered that the room mom had decided to do the basketweave heart of doom.

I am not sure why this paper craft is so widespread. The instructions say it's a simple, fun project that elementary school kids can easily do. LIES!!!!! I was a little concerned when I heard his class was going to do this project, because I've had a bad experience in the past. Some naive soul thought it would be a FANTASTIC idea for a kindergarten craft for K's class. Ha!

So, we started making the hearts of doom, and the kids were pretty frustrated. A couple kids were nearly in tears over it. Eventually, they all successfully made their hearts, and they were absolutely darling. 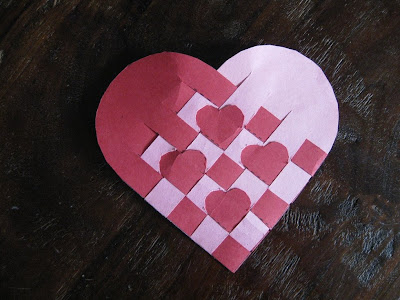 I had to leave soon after this activity ended. I went to the gym, where the 6th grade dance was about to take place. They were decorating, and it looked absolutely beautiful. All of the 6th graders have been practicing dances such as the waltz, virginia reel, boot scootin' boogie, etc. Today, they were to be assigned partners and had a full on dance. All of the kids were all dressed to the nines and looked so cute!!

I took S to school, where I played a fun prank on her teachers. They hate it when the kids get full cupcakes with lots of frosting. They're too much for one kid to handle, and they make a terrible mess. So, for giggles, I told the preschool teacher that I'd bought enough of the costco sized cupcakes for each child to have their own. Bwa hahahaha!!! After I watched them pale visibly, they said, "No..... you didn't. Really?" They tried to look enthusiastic while they said that. Then I replied, "Nope, I just wanted to torture you for a sec."

While all this was going on, I watched a car get pulled over directly across the street from the school. I recognized it as the dad of one of the students. The police had him get out of the car, and were talking to him outside the car. Soon, another sheriff showed up with a dog. They had the dog search the car. I was worried on two fronts: first, I knew that car was new to the guy- it still had temporary plates. Secondly, what if his child was still in the car? I asked one of the teachers, and she told me that Miss L actually went across the street, and got the little girl and took her into school. I love that woman for that.

Luckily, the dog found nothing, and they let him go soon after. I have to say that what happened to him has been the stuff of nightmares for me. Not only did he get pulled over with his kid in the car, but they searched it, and it all took place across the street from his kid's school. AWFUL!!!
at 1:45 PM