Tour of the Coop

I've had a couple people ask to see pictures of my chicken coop, so I am going to give you a grand tour.J designed the setup himself after looking at a lot of peoples' designs.

Here's the back of the coop with our brand new roof. 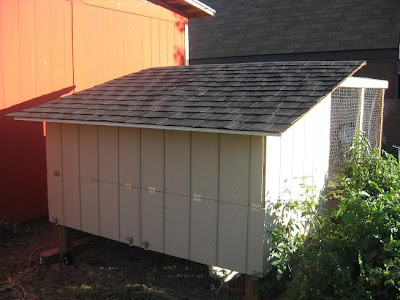 Across the back, you'll notice some doors, which latch shut for safety, but open up for easy access to the nesting boxes, where the chickens would hypothetically lay.
Here's the inside of one side of the nesting boxes. We have a total of 6, though only one is used. You can see that Clover has laid an egg for me here. I am using a fairly fine hardware cloth to keep the bedding in the boxes when I open the door to collect eggs. 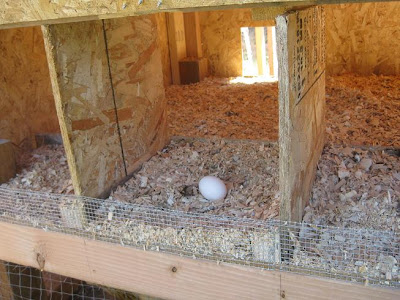 This is the back side of the coop, the side the chickens have access to. You'll see that there's a large door so that I can access the inside, as well as provide good ventilation during the summer months. There's a smaller hole for me to stick a light in so that as the weather cools off, I can supplement their light so that they continue (START?!) to lay all winter. I close the door at night and latch it shut. This coop is not really designed to keep out a determined predator, but I figure latching that door shut will help protect the chickens from large dogs, which would be the most likely culprit. 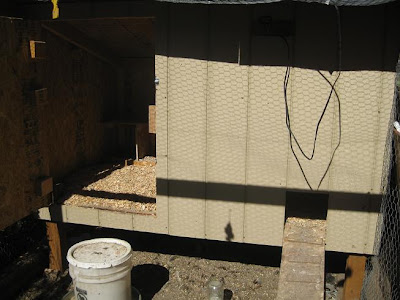 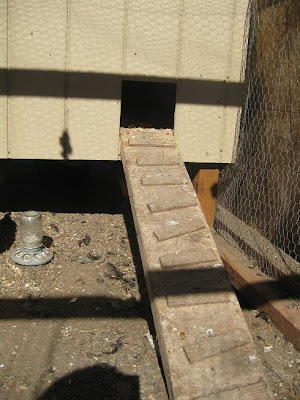 Here is the back side of the coop with the enclosed run. There's chicken wire on top and all sides. It's held in place by boards. A determined critter could burrow beneath the boards, so the coop isn't particularly ideal if you have skunks, raccoons, dogs, wolves, coyotes around. We generally don't, so I haven't worried about it too much. 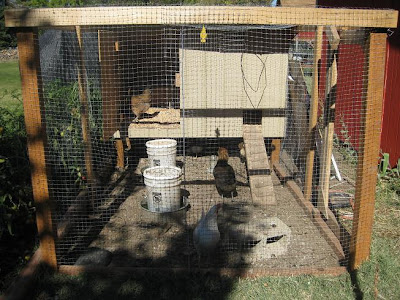 Now we have the inside of the coop. You can see the nest boxes below. Paula is in the popular box, showing us what it would look like if she were to ever lay an egg. The chickens generally either roost on top of the boxes or on the branches I've put in place. The floor also has hardware cloth. In the summer, we leave it exposed, but as it's gotten colder, we put OSB board in, and covered it with shavings. I've also bought some 1/2" styrofoam insulation that I've cut to fit the back and side walls of the chicken coop. However, I put it out there, and the next morning found they'd been pecking at it. I'm going to have J cut some very thin boards to the same shape and sandwich the insulation between the boards so the chickens will leave it alone. 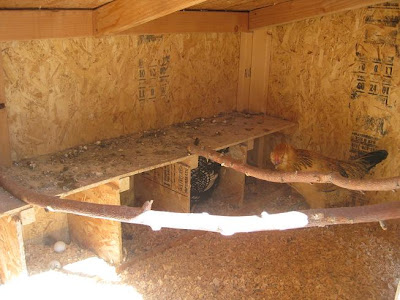 Why the golf balls, you ask? Supposedly, they show the chickens that it's acceptable to lay eggs in nesting boxes other than the popular one. Clover is the only one laying, and thus far, she's only laid in that second box in.
This is how we shut the door to the run. 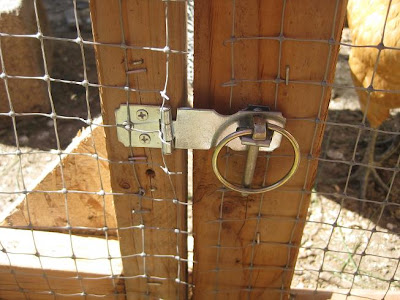 Here's a close up of our chicken feeder. It's nice to be able to put a large amount of food out at a time so that if we go out overnight, we don't have to worry about feeding and watering our flock. The water is set up the same, except that we had to seal the lid on, and cut a small hole in the top and plug with a drain plug to create a suction situation. 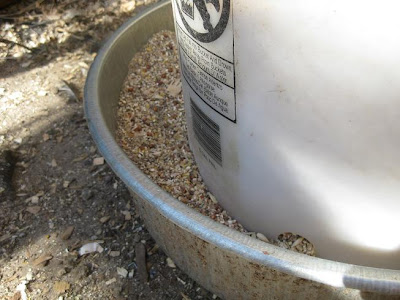 The chickens do get to go foraging around outside of the run/coop, but I only let them do that when they can be supervised, so it's usually only for an hour or so at a time.
at 1:12 PM