The cat with commitment issues 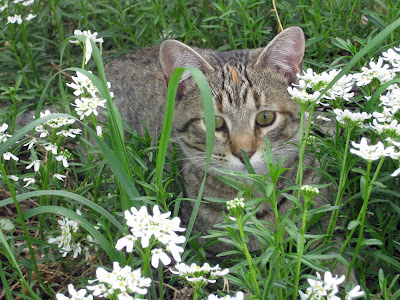 My younger sister J bought a kitten this past spring to be a "cold blooded killer". She found a litter of rats in her back yard. She loves rodents almost as much as my mom, which is to say that she has a full blooded phobia. She scoured KSL ads until she found the perfect cat. Mom and dad were barn cats in the country somewhere in Wyoming. She actually drove several hours to get one of their free kittens.

She then paid big bucks to get the cat spayed, vaccinated and microchipped. She bought her fancy toys. Installed a cat door in the garage. Named her Oren Ishii. Things went well until about a month ago.

Oren didn't come home for a few days. Oren loves to wander, so it is normal for my sister to not see her for a day or two. But, she realized she hadn't seen the cat for a while, so she started watching. No sign of her anywhere. She started calling and visiting various animal shelters. Posted an ad on KSL. Nothing. After 3-4 weeks, she accepted that Oren was probably gone.

This morning, she was surprised by a phone call from a vet's office. Oren had been found! As it turns out, a neighbor who lived behind her and down a few houses had been seeing Oren around for quite a while. She'd turn up all the time and beg for food. She assumed Oren was a stray when she started spending the night. She eventually adopted the cat, and kept her indoors at night. Bought her a kitty condo, food, and toys. Apparently there's quite the facebook following on this cat's adventures. Today, Christine (the OTHER WOMAN) decided to bite the bullet and officially claim the cat as hers. She took her to a vet to get her spayed and vaccinated. The vet decided to scan the cat for a chip, and Christine was surprised to discover that Oren did have a chip.

Christine nicely offered the cat and all of her goodies back. Within a couple hours, Oren was back at her house. I suggested that maybe Christine had better food, which insulted my sister. Jill bought this super expensive food and Christine had Meow Mix. I remember that my old cat growing up hated fancy stuff, and loved the cheapest, driest stuff you could find.

I told Jill that at least the "Other Woman" is a nice person, and happy to accept that she's not the real owner. I said it may end up being a shared custody situation.
at 8:22 PM