I hate most school fundraisers.

I really, really hate them. Passionately.

I hate how they have an assembly getting the kids all excited about the crap they can "earn" if they sell enough stuff. I hate how the stuff is overpriced, and only a small percentage actually goes to the school. I hate how the kids are desperate to sell stuff, utterly convinced that the success of the school, indeed, the very FUTURE of the school relies on them selling a bunch of wrapping paper. Or greeting cards. Or overpriced candy.

I've become spoiled because M's elementary school does the "no one comes a knockin'" fundraiser. Basically, they've figured out that if every child brings in $10, they make as much or more money than if they were to hold several traditional fundraisers. I've donated $20 per kid in the past, just to be safe, and so far, this is the third year I haven't heard from M's school.

S's school, on the other hand, LOVES fundraisers. We've already had two. The first one was Happenings Books (which, admittedly, M's school does too). Today, she came home with a new folder with order forms and booklet. I think they must've had a big assembly about it too, because she knew about allllll the wonderful prizes she could earn. Fabulous.

There's also a big decal on the folder telling me not to throw it away. 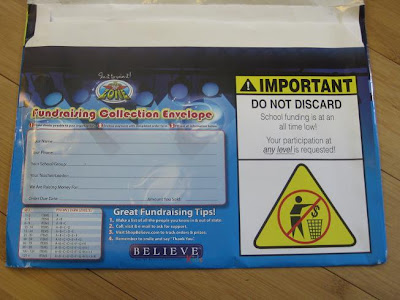 Oh, and before you accuse me of not supporting S's school, I've donated more than $20 to them. I've joined their PTA. I bought a tshirt for S. I made sure to contribute enough that I can be righteously indignant and refuse to participate and not feel an ounce of guilt.
at 3:45 PM

I agree with you on the whole fundraiser thing. It sucks, I would rather just donate 10 bucks per kid as well.

I agree that they manipulate the poor kids. And what a LAME "Caution" sign. What in the world? These people are PROS!