I rarely post about the unusual homes I see in my professional life. After a really interesting day of showings, I am breaking that rule, and hoping that it doesn't come back to bite me. I hope that I don't come off as mean; the houses I'm talking about were all lovely houses, and we liked all of them.

I took clients out to look at homes last week, and we saw some of the most unusual features I have ever seen in homes. After the fourth home with amazing quirks, I started bringing my camera so that I could capture it. Unfortunately, some of the best was not captured on film (memory card?).

House #1: pretty typical multi level, except that the master had bright pink carpet and pink walls. Then, we walked down to look at the garage. When walking from the garage into the house, the first room we encountered was a room with nothing in it except for an enormous jetted tub. Not a hot tub, a bathtub.

House #3 was mostly vacant. They hadn't quite finished moving everything out yet, but what was left was unusual. There was everything from VHS tapes to a CB radio to MREs to a false leg.

House #4 was almost immediately dubbed "Frankenhouse". It started as a tiny bungalow, and slowly has had more and more added on. It also had a very large, very unusually shaped lot. Horse and goat negotiable in the sale. Some inventive owner had seen the toilets they have in Japan where there's a sink on the back of the toilet, so that the gray water from washing your hands drains into the toilet tank, thereby reducing water usage. A very clever idea, and difficult, if not impossible to find in the US. The owner didn't let that stop him. He used an American sink and toilet and plumbing supplies, and made it work for himself. Another bathroom was painted blood red. They also had a pet cemetery in the back yard, complete with headstones. It was by far the most unusual house I've ever seen. Having said that, my clients and I really loved it. It was very different, but a LOT of fun.

Houses #5-6 were normal, more or less. One had painted the entire interior of the house an unfortunate seafoam green.

At this point, we stopped for lunch. We saw a BBQ restaurant that looked interesting, and started to go in. We saw a sign that said their bathrooms weren't functioning. Well, that wouldn't work. Next door was a bar, and the bartender was outside smoking. She offered their bathrooms for our use, so we took advantage. It was right around noon, and there was only one patron in the bar. We walk back to the bathroom and realized that it was a strip bar! There was a poor girl halfheartedly dancing for no audience (single patron had his back to the stage). Awkward!

After lunch we went to house #7. They had tried to maximize the space as best they could. They added a bar to their minuscule kitchen so that there was room for a dishwasher. Unfortunately, it made it impossible to open the fridge all the way, and difficult to access one of the drawers. I didn't try to open the dishwasher, but I wouldn't have been surprised if there had been issues there. They created a master sweet in the basement. Normally, I think it'd be a suite, but to be a suite, shouldn't there be more than one room? They put a bathroom in the corner of the master bedroom, but there was NO separation between the two. Not even a room divider. The one spouse could easily watch the other do all bedtime routine, including restroom, brushing teeth, shower, etc. The house was really nicely staged, so I was a little surprised that hadn't thought to use one of those cute room dividers to at least give the illusion of privacy.

House #8 was yet another house where the owners didn't seem to demand the same bathroom privacy issues that I've come to expect: 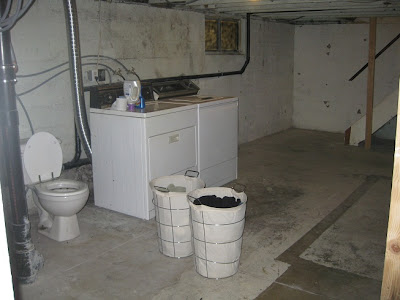 You hear stories all the time about people leaving pets behind when they move. I'd assumed that was primarily cats and dogs. Add fish to that list: 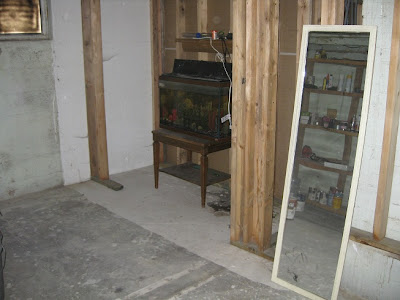 The last house we went to was another amazing old bungalow with some great history. They actually had an old boiler in their basement, which was pretty amazing to see. 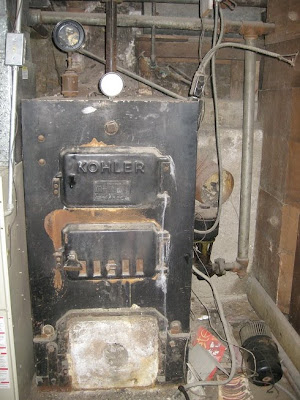 They also had the largest water collection I have ever seen. Insert "Signs" movie joke here. 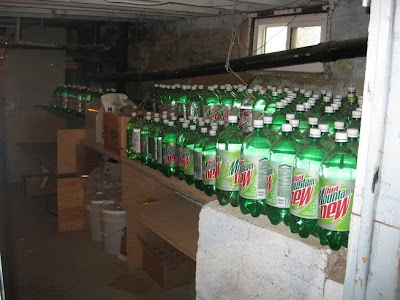 Not enough water? How about more? 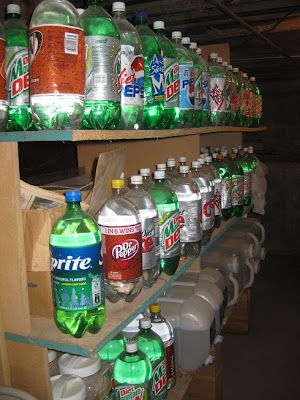 Still not convinced? How about this: 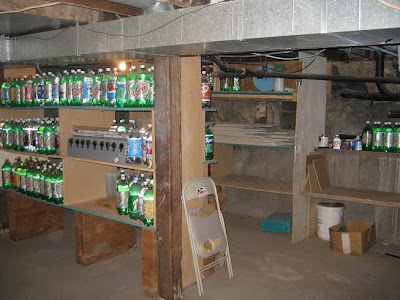 Ummm can you post pictures of the other houses? You have gotten me quite curious.

I didn't bring the camera in on the first few. The bathroom/master was recognizable enough that I chose not to post it. I could email it to you though. :)