This afternoon, I went out to collect Clover's egg. I noticed that she and Mabel weren't with the other chickens, and figured they were probably in the hen house. I opened up the left door, and sure enough, Clover is sitting in her favorite nest box. I can see she's already laid her egg, so I was a little surprised she was still there. Mabel was standing up, but watching her pretty intently. After a minute or two, Clover began singing the egg song, stood up, and left the hen house. I grabbed my egg and went inside.

I decided to go back outside to see if *maybe*, just MAYBE one of the other chickens had laid. In the last week or so, four of the five younger chickens have been willing to "squat", and they've all recently become much friendlier, even allowing me to pet them. I'm told those are signs that a pullet is about ready to start laying eggs.

I was disappointed to see the favored box empty, but decided to check the other side, just in case. I found the most beautiful olive green egg there. I am so tickled! 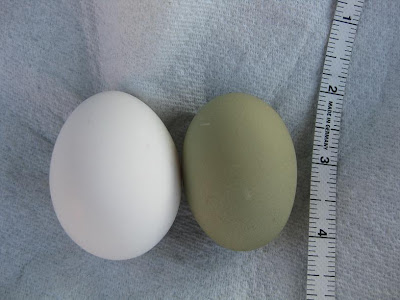 I am thrilled to get an olive egger- you don't find them too often, and it's the next hot thing. People are cross breeding blue laying hens with dark brown laying hens to get them. To get one from my EE is very exciting for me. J just rolled his eyes when I came up looking like Christmas had come early. M is the only one who has even a fraction of my enthusiasm for the eggs (well, maybe S can muster some, sometimes). When he got home, I showed him. He thought it looked like the same color as Lucy's eggs, but smaller. -sigh- Being color blind just is no fun.
at 8:54 PM

I love when you post about the eggs. I wouldn't know the first thing about this stuff if I didn't read you blog. You are educating me! Love it!