We got to go to Topaz Mountain again. This time, my parents were unable to make it due to back problems for my mom. My ILs came, as well as J's Aunt Sue. It was really emotional seeing her again, as last time we saw her was last Christmas, just after a stage 3 cancer diagnosis. She is a real fighter, and has come out to visit this week with a CLEAN BILL OF HEALTH!!! We also had J's sister's family come; some of our favorite camping companions.
We got the same spot as last time. The kids were like little mountain goats the entire time, climbing around the big rock.We spent several hours looking for Topaz near the south slopes. We split into two groups- one group was up on the hill, chiseling topaz out of stones. I was with the other group, looking for loose stones in the wash. I found quite a bit, but I gave almost all of them to my kids or my nieces.

Here's most of the topaz the kids collected: 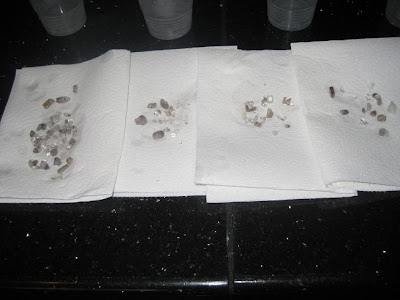 Some detail on M's topaz: 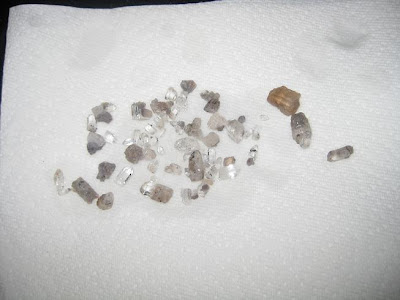 On Friday, J's brother and his family family joined us for the day. We had talked to EVEN MORE people, and had gotten EVEN MORE instructions on finding the geode beds, which I had started to privately refer to as "El Dorado" (the city of gold that spanish explorers looked in vain for). We loaded into 3 side by sides and two vehicles. I think I surprised my husband by opting to drive the rhino instead of the truck. I knew it would be dusty, but it would be a smoother ride, and it was going to be around 25 miles each way. On the way, we saw a herd of antelope, which was pretty neat. We found the turn off for the geode beds. Instead of stopping within five minutes, as we have in the past, we actually drove for a good 15 minutes past where the sign was.It was as described. You couldn't walk more than a couple steps without tripping over geodes or fragments of geodes. We collected about a 5 gallon bucket's worth. Some need to be cracked open; some are just fragments.

M found a tarantula around camp on Friday evening, which we thought was amazing. We knew they were out there in the desert in Utah, but had never seen one before. 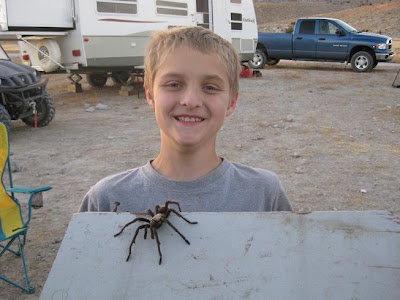 We ended up finding another one on Saturday morning and it was even bigger than the one pictured. We are fairly certain that this is a male Aphonopelma iodius. 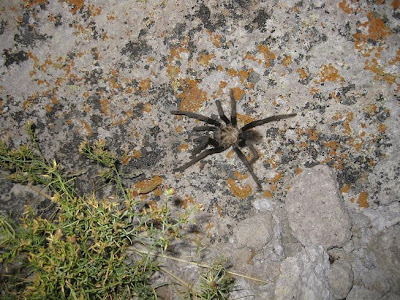 The first spider we found was in the evening. The second spider was in the morning. We also caught and released many lizards. M really wanted to keep that tarantula, but I'm not a fan of taking healthy wildlife home as pets, so I told him NO.

All in all, we had a wonderful time. Tentative plans are being made to go next spring. We're hoping that winter runoff will expose some more topaz for us.