The kids are growing up

Lately, I've been more and more aware of just how quickly my kids are growing up. Some things are obvious and noticeable (like K not being able to wear my shoes, or passing me in height). Others are smaller.

I recently took the child safety lock off of our kitchen sink because I had to get to something in the back. I simply didn't bother reattaching it because I wasn't concerned that the kids would get into the chemicals there.

Today Z noticed the lock was off when I had him put away the bottle of window cleaner. (I've been letting him spray it on the walls and wiping it off with a rag, much to his joy). He was very concerned that the lock wasn't on there, and got it put back on there himself. I guess this is why I never bothered childproofing with him much- he always figured out how the locks worked almost immediately, thereby rendering them useless. 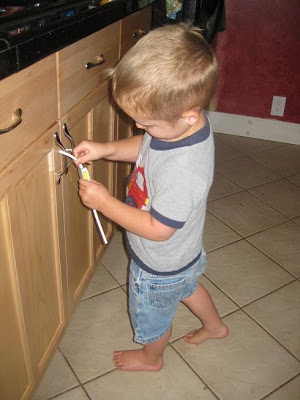 I had another moment of realization this morning. I still tend to follow automotive trends and new cars that are coming out. This morning, I read an article about the 2011 Honda Odyssey, which will hit showroom floors at the end of the month. They had two new features that interested me: First, they have redesigned their minivan so that three carseats can be in the middle row, and all three can be attached with LATCH and a tether strap. Two more carseats can be latched in the back row. Now, I'm still way too vain to drive a minivan, but I was really impressed for a minute.

Then it hit me:

My time to worry about tethering multiple carseats is almost behind me (no pun intended).

Z is still in a five point harness. S was until about a month ago, when we cleaned out the car and never reinstalled her carseat, and just tossed a booster seat in when we realized we'd forgotten. Her seat will go back into our car. Z's carseat will expire in December, and I think at that point, I'll have S's bigger seat go to him, and let her use a belt positioning booster seat.

I gleefully donated my maternity clothes and threw away the nursing bras.

I find myself getting worked up about junior high school policies, not the latest and greatest in baby gear.
at 2:07 PM