We had a really great day today. K heard that Ogden had a new orchestra (currently just a strings section), and that they would be performing for free at the Ogden Farmer's Market. She was dying to go listen to them, and I thought it sounded like a lot of fun.

My attention was soon drawn to a man and his horse. The horse was decked out in beautiful hand tooled saddle and bags, etc. His handler was wearing an old west sheriff's outfit, and having him dance to the music- stomping his feet, turning in circles, etc. Sundance was also kicking balls around to the delight of the children around him. Ron Gardiner also had trading cards that he gave out to the children that featured a photo of him and his horse.
S wanted to come meet the horse, and Mr Gardiner wiggled Sundance's lips so that he seemed to be "speaking" to her. He asked if S wanted to brush the horse's teeth. Well, of COURSE she did! 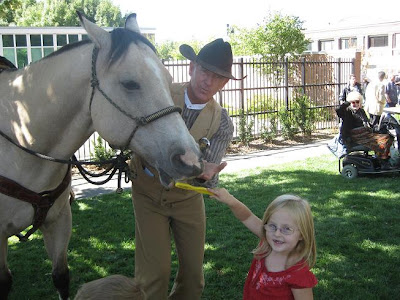 I don't think I've seen her smile that big in a long time, and S is a very smilie child.

I have to admit I was really intrigued by the duo, and decided to look them up when I got home. I have to admit I was somewhat horrified by the article I found (linked HERE). To sum up, Mr. Gardiner retired just over a year ago after 37 years of service to the Ogden Police Department (seriously? He doesn't look old enough, does he?). He almost died from carbon monoxide poisoning from a call he went on in 2006. In 2007, he suffered a head injury in a training exercise. He's since had three brain surgeries. Going through all that has left him unable to work, and so he had a medical retirement last year.

Ogden city has offered him $90,000 as a settlement, which equals out to about 15k a year, assuming he lives another 20 years. They figure since they see him at the farmer's market, he should be plenty capable of working full time.