I bet that was disappointing!

Today I babysat three of my nieces. They were in the back yard with my kids playing with the chickens. The kids noticed I had quite a few ripe veggies in my garden, and asked if they could pick some. I told them they were welcome to pick whatever was ripe, and bring it in the house for me. They picked a bunch of tomatoes and a couple eggplants.

Z was really, really excited about the eggplant he picked. He asked me to wash it off so he could eat it right away. I explained that it was a vegetable best eaten at dinner after it had been cooked. He said "OK", and set it on the counter.

A couple hours later, I find this: 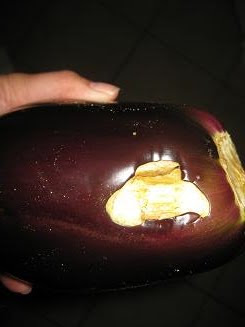 Apparently, he didn't quite believe me. The chunk of eggplant was on the floor nearby, so it looks like Mother knows best, after all.

I can kind of see his point though- I think the eggplant is a beautiful vegetable, and something that shade of purple really ought to be a sweet tasting fruit. I'll admit that my primary reason for planting eggplant in my garden is that I think it's a really pretty plant with a pretty flower and vegetable. I hadn't actually really eaten much eggplant before I started growing it. Even now, I tend to give away most of the eggplants I harvest.
at 9:29 PM