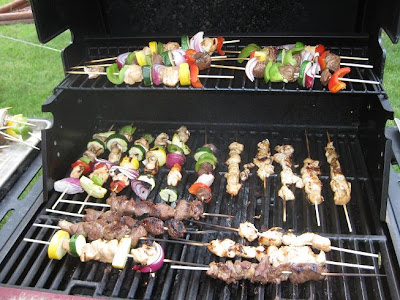 1- Our air conditioner broke
2- My dad quit working in the temple on Friday nights, so much more time for socializing
3- We haven't had my parents up in ages

So, we invited my parents up for dinner last night so they could visit, and fix our a/c. Initially I was going to grill ribs. As I got thinking though, I decided to make kabobs. I have to admit I went a little overboard though. I bought mushrooms, red and green peppers, purple onion, zucchini, yellow squash, and pineapple. Then, I set out to make three different kinds of kabobs. The first was very simple. 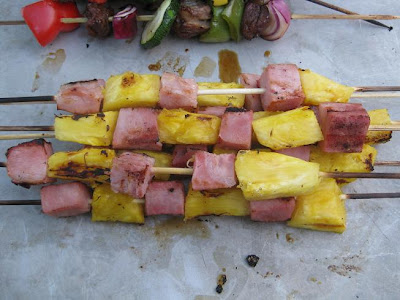 I got a small ham and cut it into 1"x 1" cubes, and did the same with pineapple. Skewered them on the stick, and then grilled just until the outside had a bit of browning. These were definitely the biggest hit with the kids.


Next, I made beef and chicken kabobs. I used the same cut up veggies, but marinated the meat in slightly different marinades. For the chicken, I used one of my favorites, the Sanpete Marinade.

Cut the chicken into 1x1" pieces. Mix marinade in a gallon size zippered bag, and put the chicken cubes in the zipper bag. Let marinate in the fridge for a couple hours, or even overnight. I like the marinade even better with turkey, but turkey isn't as easy to get.

Mix marinade in a gallon size zippered bag, and put the steak cubes in the zipper bag. Let marinate in the fridge for a couple hours, or even overnight.

I then assembled the kabobs. Knowing my kids are a little iffy about peppers and onions (and let's be brutally honest, I don't like them either), I made some kabobs that were all meat, and some that were all veggies.

It was so beautiful and colorful to see them on the grill.