Day 2 of the Cruise

When we woke up Saturday morning, we were in Ensenada, Mexico. 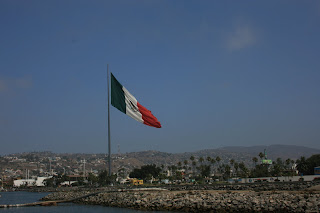 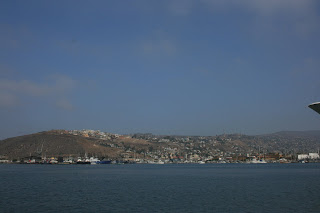 M and S chose to stay on the boat and play with the other kids in the kids' program. That was a pretty nice feature of the cruise. We could drop them off at 9am, and they were occupied til 5pm. Then we could drop them off again at 6pm, and they were occupied til 10pm. We could have opted to keep them there til 2am, but 1- ARE THEY INSANE?!!!!! and 2- it was $5 per hour, per child to do that. As long as the child was potty trained, they were good to go. We were given a pager for S. I gave that to my mom because she had opted to stay on board.

We had originally wanted to go to La Bufadora, but discovered that all tours were sold out. At $21 for adults and $14 for kids, we weren't too disappointed. We decided to just walk around Ensenada instead, and see the local sites. We discovered this sushi restaurant. We thought the name was hysterical, and J probably would've eaten there, but they were closed. 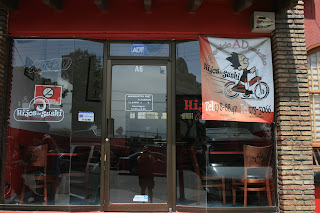 There were a ton of street vendors, who were all shocked when the blond gringo started negotiating with them in spanish. We ended up buying a couple of luchadora masks for M and S, a neat backpack for K, and a hammock for the family. We discovered if we wanted to go to La Bufadora, we could've booked a tour with any one of a dozen cab drivers who were happy to do it for $10 a person or less. We chose not to, and had a great time walking around with my dad, and my new BIL's sister and her husband.
at 7:45 PM