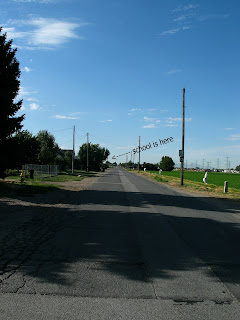 We live .3 miles away from the elementary school, living on the same road. I can actually hear the school bells ringing if I'm outside. I was pretty excited about this when we moved in, figuring the kids could walk to school. As we settled in, however, we realized our road is not really conducive to children riding their bikes (what my kids want to do). It's a fairly narrow road, with a speed limit of 30 mph. If people actually followed the speed limit, I'd feel better about it. But, most speed quite a bit.

When our school opened, they had a map up of the school, and the "safe walking routes" for the kids. Some kids were given a bus because although they lived close to the school, a safe walking route wasn't available. We have zero sidewalks between us and the school. About a third of the way to the school, there's a street. Our "preferred walking route" takes my kids up this road, over a couple blocks and back over to the school. So, instead of walking .3 miles, it's over a mile. I'm sure if there was more than just my two kids, we'd get a hazardous route bus.

And to top it off, the kids who have the hazardous route bus now have a nice walking trail that gets them off the street almost entirely for their walk to school.

I really wish our city would put a sidewalk down our street. I asked the city planner about that, and he said they were going to make whoever developed the field on the way to the school put sidewalks in.

I know the road doesn't look that bad. The road itself is fine. We just have a problem with people driving down that road at 45+ mph.

So, I guess I should be mad at the city. I want the speed limit better enforced, and sidewalks so my kids can go safely to school. And since I'm going to be annoyed, husband is really irritated that the road is so chewed up and in poor condition. I think that slows cars down, so it doesn't bother me as much.

I let the kids take the longer route on their bikes to school today, but M got a flat tire, so I ended up having to go rescue him, trying to cram his bike into my car.
at 8:09 AM

I hate it when people don't follow the speed limit. They go really fast down my road too just because they designed the road wide but it's all residential. Hopefully they'll put a sidewalk in for you soon.

People need to slow down, especially in residential areas! There are too many maniacs on the roads. (hmm,I sound just like my mom) LOL

I hope you get a sidewalk soon!

I'd be totally frustrated too! Sorry. I hope they put in a sidewalk soon.

I'd call and make some complaints and perhaps you can get a police officer out to catch speeders. Especially since it's near a school, it may get some attention.

That bites. I hope you get a sidewalk, soon!