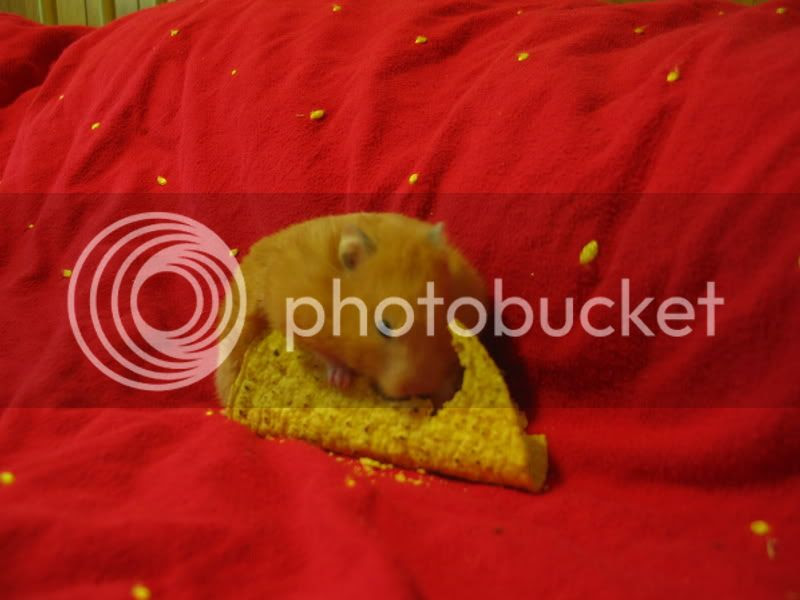 Harvey, wearing a taco. Yeah, she didn't quite get she wasn't supposed to eat her costume, but then again, the fine points as to why she was wearing a taco escapes me.
Since I've blogged about K's gecko, it's only fair that I talk about Harvey the Wonder Hamster.

About a year ago, my older kids started begging for hamsters. They thought they looked so cute and funny in the pet stores. My mom has a bona fide phobia of reptiles due to her brother's hamster having babies, and the babies getting loose in her room. So, I never had rodents growing up, and never had much interest.

After much begging and room cleaning, we got two hamsters. We put them in a tank that was 20" long by 13" wide. Thought it would be plenty of room for them. Night one went smoothly. Night two, K's hamster attacked Harvey, blinding her in one eye and nibbling on her tail (who knew they had tails?) til it bled. The next morning, I drug my pregnant self over to walmart and bought a second hamster enclosure.

K lost interest in her hamster pretty quickly, and we sold it on Craigslist a few months later. M still LOVES his hamster.

The hamster enclosure I bought is a Hartz branded cage. It's the Hartz® Placy City Extreme™ Fun House™ for Active Hamsters & Gerbils to be specific. Apparently, it wasn't designed for EXTREMELY intelligent hamsters, as Harvey can easily escape from it unless we tie it shut. Never having heard the adage (or choosing to ignore it) "throwing good money after bad", I bought the Hartz tubing accessory kit, figuring we could take the escape easy section off of the top and making the cage escape proof. No dice. She was able to escape from that even more easily! Luckily for me, Harvey loves my bedroom. Every time she's escaped, she heads straight for my room, which makes capture much easier. I live in fear that I will step on her in the night, as without my contacts, my vision is practically nill. So far, no hamsters have been squished, or lost into our ductwork. Thank you kind God for this!

Hartz product boxes proclaim that their product is satisfaction guaranteed, but to read the small print, you have to go to their website. There, they explain that to get your money back, the product must be unused, and returned to them in it's original packaging with a sales receipt. Seriously? I wrote a stern letter to the Hartz company, telling them the trouble I've had with escaping. I also told them a seven year old had paid for all of their products with money he'd earned by doing chores. We hadn't kept the receipt or box because we didn't realize our satisfaction hinged on having these items. Their response? A form letter restating their policy. Whatever!

So, if you have a hamster, do not buy any Hartz products. I have serious questions about their quality assurance, given that I doubt we have a hamster genius on our hands.
at 9:20 AM

I'd be freaked out! I hate little rodents. I can't believe they didn't refund your kid's money. That's so dumb!

Don't you know that you don't get a refund if you actually try to use a product you buy?? I hate when companies do that!