Z attends preschool, and he has a worksheet that he does each day in Miss Kimmy's classroom. I have seen a huge improvement in his efforts on the worksheets. Last year, he pretty much refused to work on them. This year, he's doing a great job writing his letters, name, and even colors the picture. It appears he finishes early, at which point he draws a picture on the back. Usually these pictures involve Star Wars.

Today, it was slightly different. 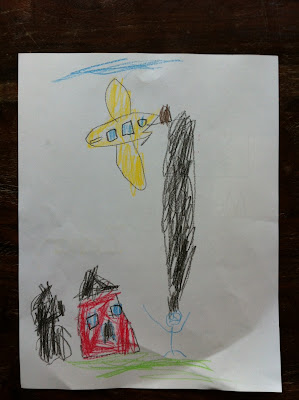 Initially, I was a little alarmed. However, I have learned that it's not a good idea to jump to conclusions when it comes the art of a small child. (See Michael's Dog Picture in first grade as evidence).

So, I asked him to tell me about his picture (notice that I kept it completely open and didn't assume anything in my question, just like the child psychology experts suggest).

He told me that the tall black thing is his (i.e. Z's) hair. Z has really, really tall hair in the picture.

Now that I know he's not my budding terrorist, I felt free to admire what a fantastic job he did of drawing a picture, especially since he's not even five years old yet!
at 9:57 AM