A year and a half ago, we discovered that K was missing her top lateral incisors. We started braces for her back in September, and things have been going well.

Our plan was to move all the teeth in place, then put fake teeth in the missing teeth spots. When she's old enough, we'll then do dental implants.

The downside to this plan was that she had a decidedly buck toothed look for a while, which had her a bit self conscious. Many of her friends have told her she has a beautiful smile, and while she thinks they're crazy, I think it has perked her up a bit to hear the compliments.

I could tell we were getting close to the fake teeth time. She had an appointment 3 weeks ago, and they ordered them that day, and scheduled an appointment for 3 weeks later.

I took her in yesterday, and two hours later, she had new teeth in! If you look closely, you can tell they're not real, but it is a huge improvement to her smile. She is so excited about it, which makes me so happy!

So, here's her teeth BEFORE the appointment yesterday. 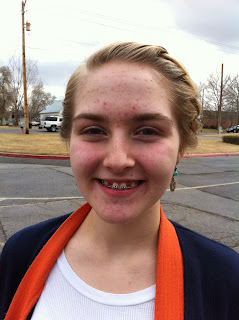 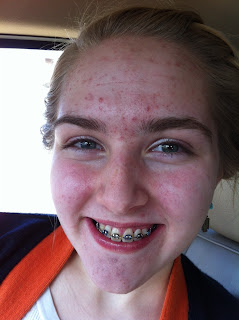 What a beautiful girl Wendy! I was born with out my left hand lateral incisor and throughout my life I never wanted to smile. I have gaps and spaces, I felt super self conscience about it. I went through 6 years of braces and now I wear a flipper to fill the space that my tooth should have been. One day I would love to the implant process but until I can afford it I will dream about it. Keep smiling girl! You have a beautiful smile. :)

Congrats to K on getting her incisors in place! It made her smile even more beautiful. Good thing she her braces on first. That will keep the new teeth in place and keep all the teeth aligned. I can’t wait to see her grow and have her implants. I imagine her having the most beautiful smile! :)

Such a lovely smile! I'm sure that beautiful smile comes with a great personality. Keep smiling, okay? I sure hope that you have gotten used to your new teeth by now. :)

For me, her smile is sparkling and alluring with or without the dental implants. =) And that is what dental procedures can do – they can change your life in an instant. Just keep visiting your dentist for you to know how to maintain your new teeth. They’ll last for a long period that way.