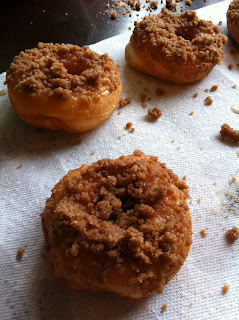 My friends have been telling me about a local place that makes amazing cinnamon crumb doughnuts. I didn't think they could be better than Banbury Cross' version, but they would be close, so that would be nice. Yesterday we met for breakfast at the local place, and I came expecting to be wowed. I was, but not in a good way. We got there at 10am. They only had glazed and chocolate glazed doughnuts left. They were out of large coffee cups (I shudder to think how big they were- the mediums were 20 oz!). They were out of bacon. It was a bit anticlimatic. Unfortunately, I was now really craving a cinnamon crumb doughnut. I only saw one solution: Make them on my own. Since I'd told K that she could invite 4-6 friends over that afternoon, it was perfect- I'd have guinea pigs to experiment on.  So, here's what I did. It was not the most simple and easy recipe I've ever made, so keep that in mind.

First, put all of the dough ingredients in the bread maker, and use the dough setting. Now, I should mention this is a lot of dough, so once it was mixed up, I put it in a large greased bowl and let it rise in there. You could probably use a heavy duty mixer and have similar results, but with less dishes. Let the dough rise until it's double in size.

Next, divide the dough in half, and roll out one half to about 1/2" thick. Cut into circles, and then use a smaller cutter to cut the hole out. I used a glass to cut the larger circles, but it was difficult. If you have a biscuit cutter or cookie cutter in a circle shape, that would probably work better.  Set doughnuts and holes on a greased piece of wax paper and let rise until double in size.

Fry in oil that's 350 degrees (I have a deep fryer, so this was simple). It will only take 2 minutes or so on each side, possibly a little less. Don't try to cook too many at once- they puff up quite a bit.

Meanwhile, make the glaze and the topping. To make the glaze, melt 1/2 cup butter. Remove from heat and add the powdered sugar. It will be a paste-like consistency. Add the vanilla, and then the hot water, one tablespoon at a time. It should be a somewhat runny consistency, but not too runny, or it won't stick to the doughnut.

To make the crumb topping, use a fork to mix all crumb ingredients together with a fork until it is a crumbly texture.

Once doughnuts are cooked, dip them in the glaze, and then sprinkle the cinnamon topping over the top. I found that the crumbs won't stick without the glaze, so you have to do both. I let the top half cool and set, and then I did the same thing to the "bottom" half of the doughnut. I also did some doughnuts that were just plain glazed for the crazies who just wanted glazed. (as a side note, if you plan to do the same, you may want to halve the crumb topping, I only used about half of it)

They were really good, though next time, I think I'd let the dough raise more. I got impatient and cooked them a little too soon, so they weren't quite as light as I'd wanted.

I'm also sure I don't want to know the calorie counts on these, so if you figure it out, please don't tell me.