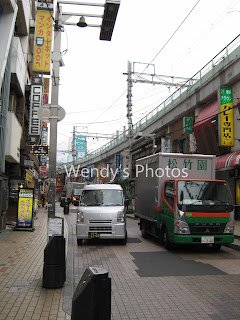 J and I had the opportunity to go to Japan a couple weeks ago. Quite a few people from several companies in several countries have been working to establish some international standards with testing and prosthetics for a while, and they meet occasionally to work on that. The latest meeting was scheduled to be in Osaka, Japan. When I heard that, I was thrilled. I've been saving airline miles, hoping for an opportunity to return to Japan. I wasn't sure if I'd ever go back, and I have to admit I got a little teary when I got there.

We traveled there with Lonnie from OH and Mike from MI.  They were both a LOT of fun, and I was glad for extra company. They flew into Salt Lake on Friday, Oct 14. We all went out to dinner that evening. Saturday I did the zombie run, while they all slaved away at the lab (this became a common theme for the trip... well, them working, me playing. The zombie thing not so much).

Sunday morning, we got to the airport before it was even light. The flight over was very uneventful. The plane we were on had on demand movies, music and games for free, which was really, really nice. I'd been concerned I'd be bored on the plane, and I was thoroughly entertained.

We arrived in Japan in the late afternoon on Monday. (whoooa) We got everyone through customs and luggage claimed, then picked up our JR Rail Passes. If you are going to be traveling to Japan, I can't recommend these high enough. Because we flew into Narita, Osaka was a good 3 hours away by bullet train, and we didn't want to do that long of a train ride when we were that tired, so we just took the train to Ueno, where we had hotel reservations waiting for us at the Sutton Place Hotel. It was very small, but clean. Poor Lonnie had some sort of mistake made by hotels.com, and they'd reserved 4 rooms for him instead of one. Not exactly the kind of issue you want to work out when you're bone tired and the other participant in the conversation speaks almost no English.

The next morning, J and the guys all hopped on a bullet train to Osaka so they could work. I headed north to Tsukuba, the town where we lived. I was going to meet my friend Shaney. Shaney is the principal at Tsukuba International School. TIS has grown SO much since K attended school there. When she went there, they had grades 1-6 and there was 18 students total. When I visited, they'd moved to a larger, nicer location, and have expanded significantly. They have a preschool program for ages 3-5, and then their school has grades 1-9.  85+ students now, but class sizes were very small. WOW!!

Our hotel in Osaka was a good 10-15 minute walk from the train station, and J was worried about me finding my way to the hotel in the dark. I told him which train I'd be on, and he said he'd find me.  I had never been to the Osaka station, so I wasn't sure if this was reasonable or not. I suspected it wasn't. As it turns out, the Osaka station is the third largest train station IN THE WORLD. Yeah, super easy to find someone "at the train station". After looking for him for a half hour or so (dragging my luggage, incidentally), I gave up and walked to the ANA Crowne Plaza, which was MUCH easier to find! This is the view out our hotel window: 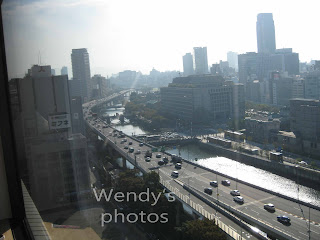 The next day, the guys all hopped on a train to go work all day. I got on a train and went to Kyoto. Kyoto is an absolutely amazing, beautiful city. I spent one day there with J, but that was almost 10 years ago. I didn't have any particular plans there, other than to see the Golden Pavilion (aka Kinkakuji). I got a map from the tourist booth at the train station. Unfortunately, they didn't mention there is an awesome deal on a day pass for the bus. I really could've used that, so I would highly recommend that to other people.  So, I left the train station and walked to Kinkakuji (which is approximately 3-4 miles). I stopped a couple times at other shrines along the way, and had a lovely time looking at them. 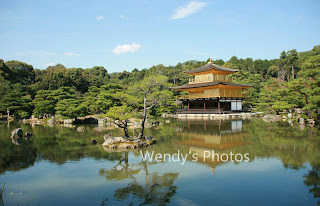 Kinkakuji was one of the most amazing things I have ever seen. It was stunningly beautiful, and didn't even look real.

The upper two levels are actually covered in gold leaf. It was amazing to look at. 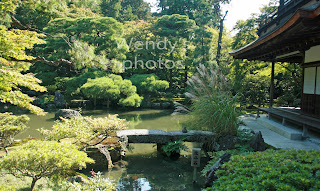 After that visual feast, I decided that I MUST go see the Ginkakuji (Silver Pavilion). It was all the way across the city. I got a couple miles in and was really tired. I finally started paying attention to the buses, and hopped a bus for a couple hundred yen. Boy, did I feel incredibly foolish! A very nice lady who spoke no English at all told me a couple temples I should definitely go see. She actually felt they were better to see than my planned destination.  Nobody bothered telling me that The Silver Pavilion wasn't ACTUALLY covered in silver, like the golden pavilion. I'm sure Mrs. Nice Japanese lady was trying to tell me that, but oh well.  It was still really beautiful to see, and the designs they made with sand were really pretty. 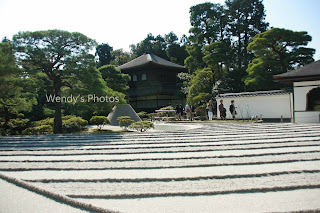 I explored the city a bit more, but I was pretty tired, and I was planning to meet up with the ISO standards group for dinner, so I got back on a bullet train and went back to Osaka.

That night, we had an extremely fancy, extremely traditional Japanese meal. It was served in a Tatami room, and had so many courses that I lost track. Here is just one: 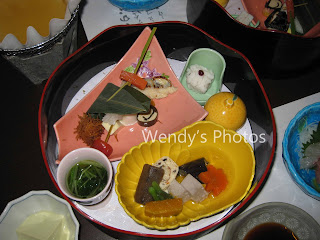