On Thursday, J took off to go work.  I wasn't quite sure what I wanted to do. He was going to finish before it was too late, and we had plans to meet with a bunch of his associates to have Yaki Niku for dinner. So, I didn't want to do anything that required hours and hours of train rides.

I finally decided to go to Mino-h or Minoh, which is located in the Osaka prefecture. The train going there was not part of the JR line, so I had to buy my train ticket. The JR ticket machines have a lovely button in the one corner that says "English". When you push it, everything is in English. This other train company had no English button. 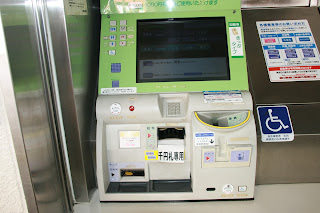 After attempting to look lost and confused (wasn't a big challenge), nobody came to my aid. Weird. Having a bewildered look on my face had always prompted strangers stepping in to ask if I needed help in the past. Oh well. I found some schoolboys and asked them to help me buy my ticket. I watched what they did and was able to buy my ticket home without incident. I *think* I did it correctly- the little doors at the ticket station didn't slam shut, so I considered that good news. This was foreshadowing for the day though. Minoh is definitely not geared to the international tourist. Everything was extremely well marked. If you read Japanese. So, I found myself being pretty much illiterate the entire day. 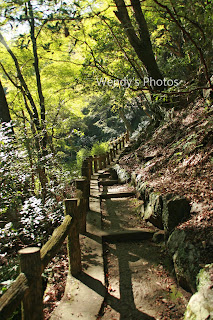 Minoh, Osaka, Japan is known for being a small town with a beautiful wilderness area. The area has thousands of Japanese maple trees along a mountainous walk area.  There's a couple little shrines along the way, as well as a small cemetery.Oh, and guess what else is there?  MONKEYS!  Wild monkeys!  I only saw one, and unfortunately, it dashed off before I got a photo. There were warnings everywhere, telling us not to feed the monkeys. Words to live by, man. 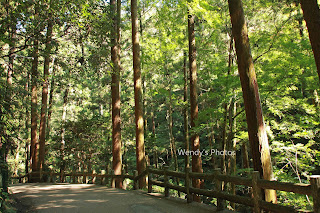 I think I was there about 3 weeks too early to get the full effect of how gorgeous this place can be. I saw a couple of trees that were starting to turn red, but I bet that early November is an incredible time to go with all of those trees appearing to be on fire.

At the end of the trail, there was a beautiful waterfall. There was quite a few benches for people to sit down and admire the view. 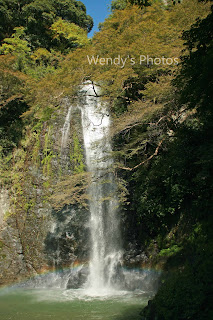 One of the things that Minoh is known for is their fried maple leaves. I had no idea they were edible, but since it wasn't fishy, I was game to try it. I was pleasantly surprised at the fact that it was pretty good. Admittedly, I couldn't actually taste the leaf. It just tasted like crispy, sweet, fried dough with a slight sesame taste. 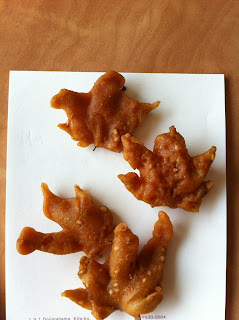 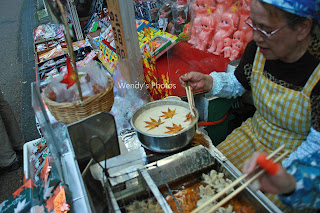 That night, we went out to dinner with a bunch of people from the ISO group. J and I had gone on and on about how wonderful yaki niku is. When you go to a yakiniku restaurant, they bring you a plate of marinated meat that has been thinly sliced. You cook it at a little grill that is set into your table. It's really, really good. J got recommendations from the hotel.  Unfortunately, it turned out to be bad advice (in my opinion). I found the restaurant to be overpriced and not good. The plate we ordered had rib bones with it. What?! It was a little embarrassing to have all those people with us, and it ended up being the worst yakiniku experience either of us ever had. 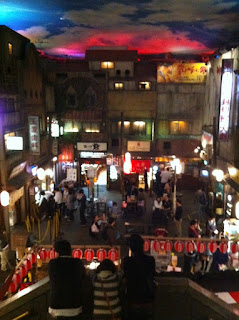 The next day, we checked out of our hotel, and took a train to Yokohama. We went to lunch at the Ramen Museum, which was quite close to the hotel. There was an entrance fee, but the ramen was quite discounted, and available in smaller bowls so that you could try a couple different styles. I knew I liked some ramen more than others, but here I learned that the kind I really liked was called shoyu. The area was set up to mimic a portion of Tokyo in 1958. Why 1958? Because that's the year instant ramen was invented and package. There were lots of air raid sirens going off, which confused me a little- I thought it was a fairly peaceful time in Japanese history. I need to research this out. 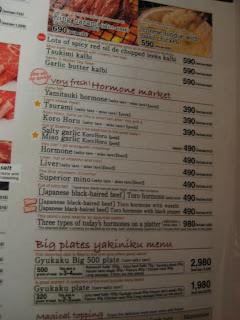 That evening, we went out for (really excellent) yakiniku with one of my close friends- Tsubasa and her husband, Jun.

Saturday found J at a convention for prosthetics, and Tsubasa's husband giving a presentation. I also realized I had procrastinated enough, and I really HAD to pick up some souvineers. Tsubasa had thoroughly spoiled our children and bought them a ton of candy and treats, so that did take some pressure off.  She and I did a bit of shopping and girl talk, and generally had a wonderful time. I really wish I could see her more often.

Saturday night, J and I took the train to go meet an old friend of mine from school. His wife had a baby a couple days earlier, and I was dying to meet the newborn, as well as their toddler. We had a lovely evening visiting with their family. 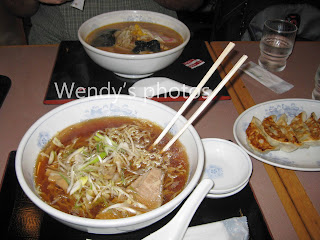 Sunday we took our time getting to the airport. We had a final Japanese lunch at the airport, and I had an awesome bowl of shoyu ramen along with some gyoza (potstickers). It was so good, and I already miss it terribly.

It was a wonderful week. I had an amazing time, even if I was going through iPhone withdrawals. We didn't want to pay for international calling or web browsing, so we only had access to our phones in wifi hotspots (which I never did find any) or at our hotel, where we did have wifi. We were able to call home from our hotel using TextFree, our free texting app. They have a phone calling section, and it was a wonderful, very cheap way of calling home.
at 11:59 AM