I've been working to get all caught up on my blog, and I have to admit this was a post that I was dreading.

On Thursday, November 3, my neighbor's daughter came over to my house, deeply upset. She is a senior in high school, and had just arrived home from school. She was going to collect eggs and discovered that 12 of their 18 chickens were dead, and 2-3 more were injured. She wanted to call her mother and share the news. She left her a voicemail. I said I'd come outside and help her.

As we walked outside, I thought I should check on my birds, just in case. I wasn't too worried, as our coop is totally enclosed. Then, I remembered, it's not. When we extended our run, we ran out of the wire fencing we were using over the top. There was a spot at the end on top, about 18" wide that didn't get covered. We'd tossed a big board over the top, but it had been a couple months. It was entirely possible that the board had fallen off.

As I got to my coop, I realized the worst had happened- seven of my hens were dead. The only survivor in the coop was Bow, my gift chicken from the neighbor. We hadn't had her very long, and I still hadn't quite thought of her as "ours".  There was no sign of Sue.  Then, I heard him crow. But, he wasn't in our yard- he was at a neighbor's, two doors down. As it turned out, he had a minor injury on his neck/throat area, but he was doing pretty well, other than being emotionally traumatized.

I went to the neighbor's house and saw 12 of their hens laying in their coop, mutilated. The most upsetting thing about finding them dead was that they just looked played with- they were pretty much intact, just dead. If it had been a starving animal who had eaten them, while upsetting, it would've been at least somewhat understandable. But these were just toyed with. She had a few remaining chickens who had survived, some injured, others ok.  To get into her chicken run, the critter would have had to jump a 6' fence to get into her backyard proper, then jump another 6' fence to get into the chicken run.  Given our somewhat-secure chicken runs, we knew this wasn't the work of a dog.

Our other neighbor, Dan, came over, and helped us bury all of the birds. He asked around, and a family of raccoons has been spotted in the area. We feel this is probably the culprit.

Jennie was very upset about the loss of her chickens. While she does love her chickens more than I do (I know, seems hard to believe, but it's absolutely true), they were also a money source to her- the money she made from selling eggs was paying for her horse AND chicken feed.  I gave her back Bow. I rehomed Sue to a family who has 13 hens. I got an update from the new owner this morning, saying that he is very gentle with his new girls, as well as the owner, and seems to be a very happy rooster.

So, at this point, I have no chickens.

Back in September, I hatched four chicks and gave them to my sister in law and her family. They have had so much fun with their new babies and have really gotten attached to them (at least, that's how it's appeared from the outside looking in). However, when they heard that I'd lost all of mine, they offered to give the chicks back. I was so touched by the gesture that I nearly cried.

The same day of the incident, while I was steeling myself to go clean up the carnage, I took my final dozen eggs out of the fridge. 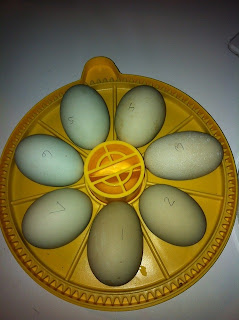 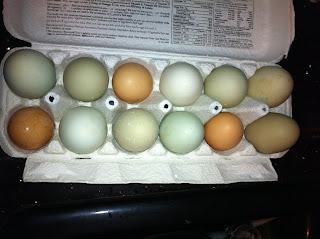 I picked out the 7 that I thought were the prettiest, and set them to incubate.

After a few days, I decided to candle them. I realized that egg #3 had a small crack in it, and realized it probably wouldn't be able to hatch the chick, so I threw it out and put another egg in its' place. I've since heard success stories of hatching cracked eggs, so I worry that I made a mistake. However, Egg #3.1 is developing great. 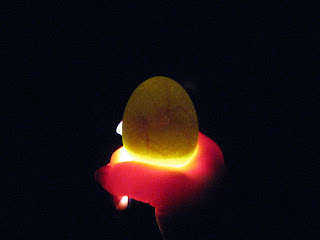 At this point, it is day 10 in the incubation.  It appears that six of the eggs are developing nicely. Egg #5 seems to be a quitter- I think it quit about 2-3 days into it. Eggs #1 and #2 are so dark that it's tough to tell, but I'm pretty sure I saw some veining. 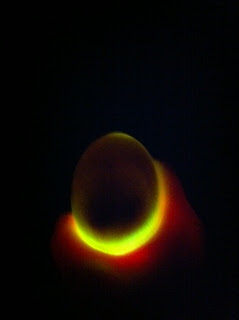