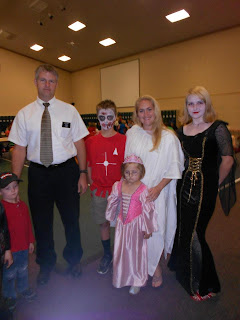 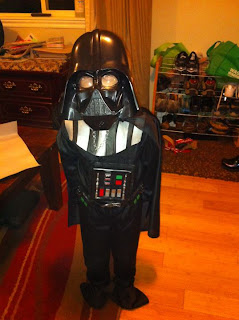 I was a terrible mother this year- I was not good about getting a picture of K in her main Halloween costume.  She was supposed to have a role in the "doll room" of the spook alley at her school. We found a wedding dress, veil, and petticoat at a second hand store that fit her perfectly. We applied pale makeup to her skin and then put red lipstick and false eyelashes on. Scary! (especially the 13 year old in the wedding dress part!) However, wearing a wedding dress around isn't particularly comfortable- it's quite cumbersome, so she opted to just borrow a costume I had for a couple of the parties that we went to. S was a princess. I wanted to make her a beautiful dress, but she found that one in a store, and just had to have it. I twitched a little but agreed. Z was "Dark Mater". 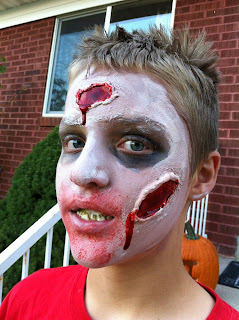 After seeing my zombie makeup for the run, M really wanted to be a zombie as well. I made his wounds with liquid latex and toilet paper. This picture is actually my first attempt (I got to do the whole ensemble three times), and was the worst attempt, but I didn't get pictures of the best. So, use your imagination.

As for us, J was a missionary, and I was his constant companion, so long as he behaved. Can you guess who I was? My robe had holes all over it, so I was "hole-y". Got it? I was the Holy Ghost. ha ha ha 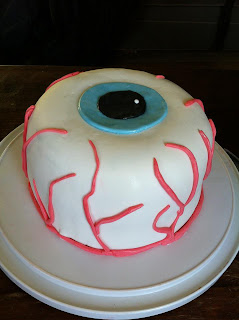 We went to a couple halloween parties, and I had fun with the food.  I made an eyeball cake using red velvet cake and cherry pie filling. I thought it looked pretty awesome. 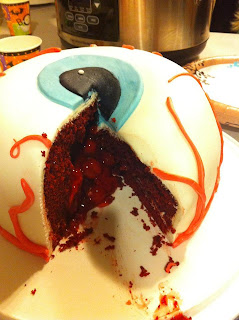 That cake is so gross looking when you show the cut picture! I LOVE it!