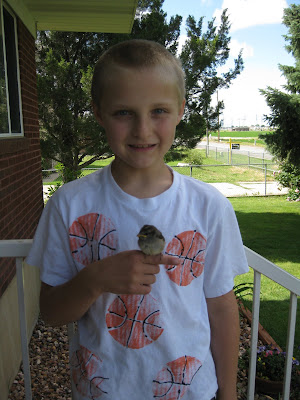 I discovered on Thursday, June 18, that the Wildlife Rehabilitation Center of Northern Utah has gone independent, has finished their move, and were again accepting baby birds. Even though we had done a fabulous job of taking care of Jack, we didn't know the first thing about teaching him to be a wild bird. Opening doors and windows so he could hear other birds wasn't going to cut it. In addition, we were leaving Thursday afternoon to go to Goblin Valley for the weekend. We knew a couple of the hikes we had planned would take us away from the trailer for 6-7 hours at a time. A baby bird can't go that long without eating. Although I am eccentric and devoted, I was NOT going to carry a 30 lb child on my back, and a baby bird in a box on a hike.

It was a tough decision, and M was in tears over it. The two of us took Jack in and gave them a small donation to help them rehab Jack.

We had a wonderful weekend in Goblin Valley (more on that later), and it was nice to not feed a bird every 30 minutes.

I called WRC on Monday afternoon to see how Jack had adjusted. If he had imprinted on us, he was doomed to a life of captivity. The volunteer on the phone told me they'd had 9 other baby sparrows dropped off since we'd dropped off Jack. She did remember Jack specifically though. None of the birds had been taken care of by people for anywhere near as long as Jack. She admitted that she was surprised at how healthy Jack was. She also said she'd been just positive he would've imprinted because he'd been in our care for so long. However, within a couple hours of getting into his "nest group", he started acting just like any other wild bird. She said his prognosis for surviving in the wild was excellent.

We are very proud of our hard work.

I now have promised M a domesticated bird. I am a little torn on what to do. Part of me wants to go as cheap as possible and just do the parakeet and cage off KSL. But, I've always wanted a bird that could talk (yes, I know that eventually a parakeet can talk, but let's be honest- that's very rare), so I kind of want to buy something a little pricier that would be talking.
at 2:35 PM

I think if you are going to get a bird you should get one that you've always wanted. That is just my opinion though.