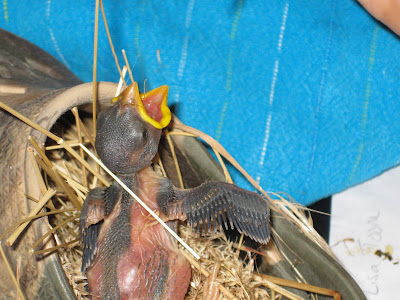 Last night, we hosted pack meeting in our back yard. Part of the activity was to roast marshmallows. While I was helping with the boys, J was building a fire. He was gathering some sticks that had fallen in the last little while to burn when he found two baby sparrows on the ground. We'd guess they were about 4 days old. The one was already dead, and the other was still alive, but had ants biting it. J rescued it, and K carried it around the yard to keep it warm. We tried to put it back in the nest, but the nest had been destroyed in the wind storm. 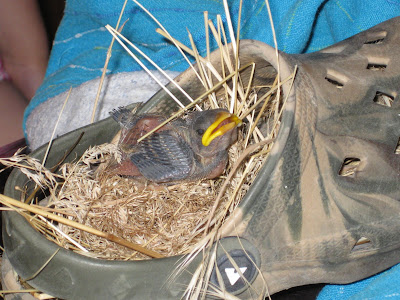 So, last night we put it in a croc that we'd put some soft grasses in, and wrapped it in a heating pad. He wouldn't eat last night, so I was fairly sure he'd be dead when we got up this morning.

However, when J got up to go to work, he found the bird awake and starving. He fed him an entire worm and went off to work.

This morning, we upgraded his nest (we are using the abandoned mourning dove nest from last year), and M has been feeding him every 20 minutes or so. 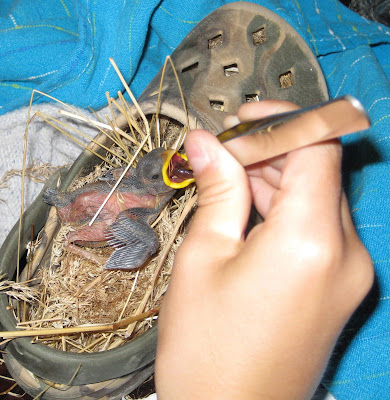 I still don't think this will have a happy ending, but I admire M's persistence in trying to keep the bird alive. Hopefully there will be a positive life lesson here. 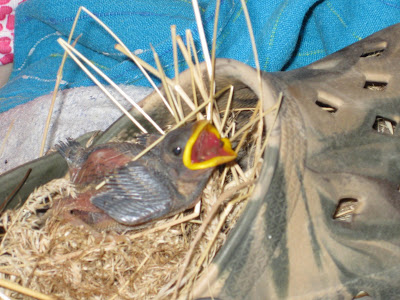 We found THIS website that outlines how to care for baby birds, so we are now following their instructions. These people found a bird that was only a day old, and raised it to adulthood, so maybe it's not as hopeless as I think it is.
at 9:30 AM

I just love that you are doing this. Please keep us updated with pictures of the little guy.