West Jordan City is performing Rodgers and Hammerstein's "State Fair" from June 19-30. Click HERE for an article with more details if you want to attend. We attended last night because my dad was in it, and my kids love going to see him perform. S was deeply concerned because "grandpa was really mad at his friend". After the play was over, and she kept talking about that, my dad took her over to the actor my dad's character yelled at, and they hugged and visited to show S that they weren't REALLY mad at each other. I took a whole bunch of pictures (of the first half anyway) and posted some of them on my photo blog.

S was surprisingly good through the play, especially with the occasional bribe of an M&M. She loved the song "Iowa" from the musical, and was singing, dancing and clapping through it. I tried to take a picture of her during that song, but I refused to use a flash, and lots of movement+low lighting+no flash= a very blurry picture. But, it shows just how enthusiastically she was dancing. 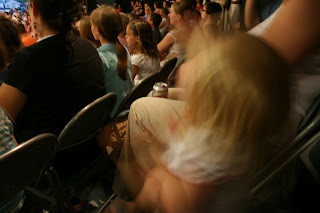