I am a den mother for cub scouts. I am a Bear leader, to be more specific. Bears are 9 year old boys. I have to admit that is one of my very favorite ages. The kids are old enough to be fairly well behaved and self sufficient, but not hormonal and full of teen angst just yet. I have been a bear leader off and on for several years now.

Recently, I bumped into one of my first cub scouts. He literally towered over me. He was very handsome, and very, very old. I think he'd have to be at least 16 or so by now. There's nothing that makes you feel old like running into someone when they were little, and they're suddenly big. My mom was telling me about the first time she really felt old was when a boy she used to babysit as a small child became a medical doctor. Yipes!

My annual mother's day project has always been a hit. I buy small (4") pots, and a couple pony packs of flowers. I have the boys paint the pot, which passes off an art elective. While the pot is drying, I have them write a letter of thanks to their mom, which passes off a requirement in the "jot it down" section. Then, they plant the flower. Unfortunately, to pass anything off, they have to do a lot more gardening than just one flower, so that in and of itself won't pass anything off.

This year, I bought my flower pony packs from J&J Nursery, the largest nursery in Utah, and conveniently located within 20 minutes of my house. They had some beautiful dahlias that I just loved, so we got those. It was called the "Harlequin Mix".

One boy rode his bike over, so bringing his mother's day gift home wasn't possible. He is supposed to come back with his parents and come pick it up, but if he doesn't, I'll drop it by his house this afternoon. So here's his beautiful project: 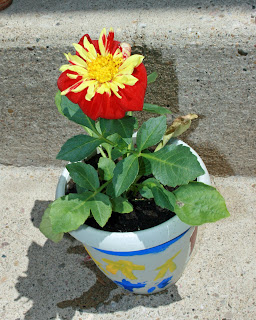 sounds like a fun project! I bet the boys loved doing it, and the mom's love getting it. :)