When I made that last fondant cake, I brought it to a baby blessing. My niece is allergic to eggs and nuts, but I was under the impression she wasn't going to be to the food part of the blessing, so I made the cake with eggs. At the last minute, her family decided to stay. Her siblings and her weren't able to eat the cake due to the eggs, much to their disappointment.

Today we were going to celebrate the birthday of a different niece and my father in law. I promised that I would make a "fancy cake" that would be "Abbi-Safe". To further complicate it, the birthday girl's favorite cake is chocolate, and her favorite color is red. I used THIS eggless chocolate cake recipe. I had to stay up fairly late last night to bake it.

This morning, I was feeling very sleepy. The littles were cranky and recovering from colds. DH had taken M ATVing, so I was on my own with the 3 remaining kids. K and I also had to do a girl scout cookie booth. I'll admit I was really regretting agreeing to bake the fancy cake. But, I promised, so I sighed and got to work.

The bow did not turn out at all like I'd originally hoped, so I was pretty disappointed with that. I also feel like I didn't do as good of a job with the fondant as I have in the past. The camera is pretty forgiving though.

When we got to the party, the kids who rarely get a traditional birthday cake at parties due to the allergies were so excited they almost couldn't see straight. I think they were actually more excited than the birthday girl over the cake. I know their mother has a really great cake recipe, so I don't know why they were so excited. Maybe because she usually does cupcakes instead of a cake? I dunno. It's probably related to the fact that I can serve my kids a 4 course meal, take them to a friend's house, and they're immediately famished, like they haven't eaten in weeks.

Either way, I have to admit I loved their excitement. It made the hard work worthwhile. 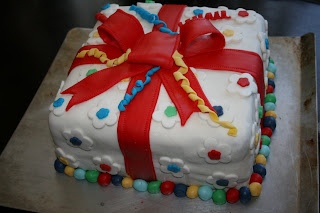 Wow Wendy. That cake is so awesome!

It really is awesome! I can't believe it's real!