We took a trip to Yellowstone recently. I'll post more about that in a bit, but first, I wanted to post this picture of our family. 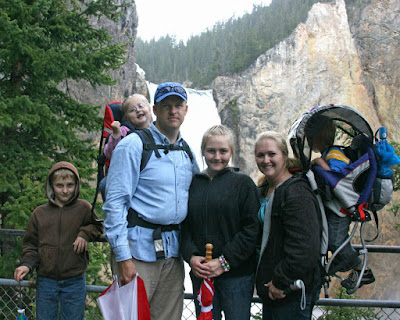 This was at the base of Uncle Tom's Trail, a gnarly hike that is more steps than anything else. There were over 300 steps to get to the point where this photo was taken. It was raining on the way down. We didn't feel like the little kids could make the hike, so J and I each carried one on our backs. As it turned out, Z has gotten too big for me to carry for something soooo rigorous, and my dad ended up having to carry Z most of the way back.

I got that picture back, and two things struck me. First, Z refused to look at the camera because he was so entranced by the waterfall. Secondly, hmmmm, why does K look taller than me? Could it be?

Can one of my children have already grown taller than me?

I insisted that I was either weighted down by Z, or that the ground was uneven.

Ha,ha. That was my first thought when I saw the picture... it wasn't the beautiful backdrop or your cute smiling family. My immediate reaction was "Oh Wow, K is taller than Wendy, I didn't think she was old enought yet". She looks just like she could be your twin!