I thought it would be easier to just talk about the weekend in one big post.

Friday: S had a field trip to take front runner to Discovery Gateway for a field trip. J took S & Z to that field trip.
M had a "mountain man rendezvous" with the 4th grade at school, and I volunteered with that.

K had a "medieval feast" with the 6th grade. Each child was assigned a role, and they were to dress in an appropriate costume and play the role. She was a lady, and I have spent the last two weeks working on a dress for it. I'm quite proud of how it turned out. It was Simplicity 9891. 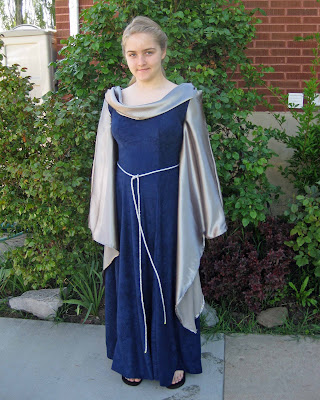 After we got done with school, I quickly packed the truck, and took off with K & M. It was raining a bit, and I worried that our clothing would get wet, but it turned out ok. We picked up J and the little kids from Discovery Gateway.

Then, we went to visit J's grandfather Bruce, who recently moved to Utah. He is in a care center here, and is unable to speak at this point. It was his 83rd birthday, and we gave him a bunch of pictures. While there, we hung them up on the wall. It is a little upsetting to see him in this state. He is one of the most take charge, strong people I've ever met, and I can't imagine how upset he must be to be in this state. He cried when I told him that we had to go, and it almost broke my heart. Old age is so cruel.
After that, we made a stop in Springville. We sold our parrot back in March, and had promised M that we would go visit Rudy in May. The new owner was happy to let us stop by his business and see him. Rudy definitely recognized us. For M, that was a good thing. For some reason though, he was very agitated towards me, and actually flew at me from his cage to attack me. He got two pretty bad bites in on the inside of my wrist. Broke the skin in four places, and it's bruised as well. I know it's stupid, but it really hurt my feelings! I can't understand why he was so angry towards me; he'd always tolerated/liked me before. The new owner reported that Rudy has settled in nicely (he is now called Rocky, which is fine with us). However, he no longer says "Hello", "I love you" or any of the other phrases we taught him. He does now say "Wake up!".

We eventually got to Ephraim for our annual trek for Scandinavian Days. There's also a casual family reunion with my Grandma Jane's side of the family that weekend. Normally, there's well over 200 people, but this year was a much smaller event. Jim's parents came, as well as his sister and her family. Yes, I realize it may be a bit odd to invite the inlaws to a family reunion, but J has such cool family that his parents and siblings are invited to this particular family reunion. Jill and her husband and stepdaughter came as well. They ended up buying the most adorable boxer puppy while down there. I'm in love with him! 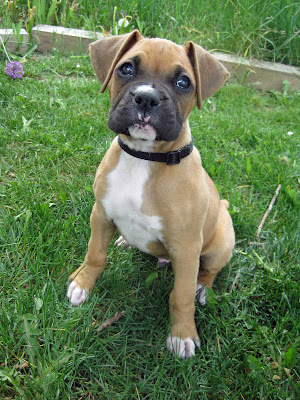 I usually am ready to leave by Sunday morning because I am violently allergic to *something* in Ephraim that weekend. I was sad to go as well though, because it was so much fun to be with such fun people. It didn't help matters that I knew I was leaving a day early because I had to go work my part time job.

We got home, checked on things, and had a few minutes to unwind before I had to go to work. I was OVERJOYED to see that I have 5 potato plants that have popped up. I am so excited!
at 8:13 PM

That dress turned out so good! I am very impressed, I didn't know you could sew that well. Jealous! Were you allergic when you attended school there as well? I wonder what it is?