We had a really great Easter. As tradition dictates, we went to my grandmother's for a nice lunch and Easter Egg hunt. We'd thought about hosting this year, because let's face it. Our back yard would make for an awesome easter egg hunt. But, my grandma wanted to continue tradition, and it's much easier to be a guest than a host. Instead of planning and carrying out the entire meal, I was in charge of drinks. I made a nice punch. 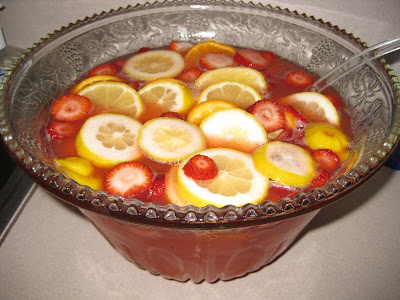 Recipe can be found HERE. I reduced the sugar called for to 1.5 cups, and I think I could reduce it even more and have it be good.

The really exciting part of Easter this year was a present we got for the kids. My poor, long suffering husband was forced to drive to Lehi (which is about 45 minutes south of his work, and well over an hour south of us) to pick them up. He picked them up on Tuesday, and dropped them off at my equally long suffering parents, who agreed to babysit them until Sunday. My mom was terrified that one (or more) would die before Easter came. All of her fears were for nothing, and my kids were pretty excited when they saw their gift: 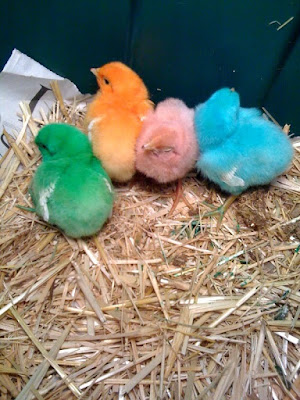 These are White Leghorn chickens. This picture was taken on Tuesday, when they were 9 days old. They've grown quite a bit since then. A lot more of the adult white feathers have come in.

How do they get chickens in such vivid shades? Well, they dye them. They dye them before they are even hatched! I did some searching, and they get a syringe of dye, and put it in the egg about 11 days after it's laid. They then seal the hole with some paraffin, and hope for the best. As they grow up and lose their baby fluff, they will lose their color. As adults, you will never know they had such an unusual beginning. 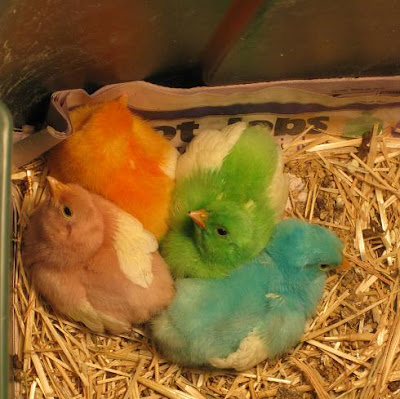