Sadly, I have quite a few embarrassing memories associated with driving in Japan. I really wish I had known about blogging when I lived there, because my blog would've been a LOT more interesting back then. Unfortunately, I didn't, so you'll just have to have occasional memories of it. This is the first.

When we got to Japan, we were given a super fancy brand new Honda J-Odyssey. It was like the American version, only cooler. 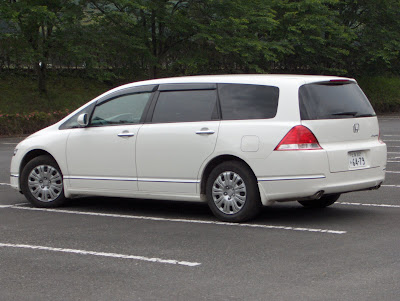 It came equipped with a navigational system. Eventually, we learned how to program it so that it spoke English, and the instructions were in English, but it took a couple weeks. In the first couple of weeks, we managed to put pins in our home location and church location, and then push buttons and hope to find our way back home.

K's school was going to do a field trip to a place with a kitchen, and we were going to teach the kids some cooking lessons. To make sure I could go, I dropped J off at work very early, and then was ready to go to school. We had some Swedish friends, the Kalman family. They had several children enrolled in the school, and had been giving K a ride each day, since we lived very close together, and I was stranded during the day.

On the morning in question, I picked up the Kalmans without incident. I knew how to get to the school one way, but decided to go a different reason. By this time, I had programmed the navi to have school directions, so I'd told it to take us to school.

To get to the school from this alternate direction, you get on an overpass with several little off ramps. If you take the wrong one, who knows where you go. If you don't get off the ramp, you end up on the toll freeway. Well, the navi system is telling me to turn onto a one way street that is against the direction I'm driving. I refuse to do this (for obvious reasons).

Somehow, I end up on the toll freeway. I take the automated ticket when I get on. By this time, I am freaking out because I'm a good 10 minutes late for school, and I've never been on this toll freeway. All of the signs are in Japanese. I get off at the first exit. I have managed to lose my ticket. I have no idea the name of the entrance I got on at. I am pregnant and hormonal and at my limit. I burst into tears when the poor man running the toll booth doesn't speak English. He has me pull off, and leaves me to his superiors to deal with. By now, I am really, really, really late. The other parents have begun to call me because they are very worried.

The superiors at the toll booth apparently didn't want to deal with a weeping pregnant woman because they decided my toll wasn't worth it and let me go without paying. I get off, and I have no idea where I am. I have never seen this part of town before. Considering I'd only lived there a couple of weeks, this isn't surprising. I manage to get my navi to give me directions home. I figure I'll drive until I recognize the area, and then go the way to school that I know.

One of the moms was sweet enough to wait at the school for me (there was NO WAY I was finding the field trip place on my own at that point).

The other moms really fussed over me, which of course made me want to cry even harder. K's teacher, Ms. Bzdel, cheered me up with her own "Lost in Japan" story that was definitely scarier than mine, though she had less witnesses. For the rest of the school year, the other mothers were genuinely concerned that I was going to get lost if I ever drove anywhere. The Kalmans drove K to school for the remaining time they lived in Japan.

My embarrassing situations in Japan taught me something. The more witnesses you have to an incident, the worse it is. The more people you KNOW and SEE DAILY makes it even more painful.
at 8:22 PM