We had a really nice day as a family yesterday.

We started off the day on a bike ride. There's a walking/biking path that our city made out of an old train route. It was approximately 3 miles each way, according to google maps.

Then, K helped her daddy sand the railing for the playhouse. It is just about finished. It needs just a little more sanding, and then I'll paint it a redwood red color. 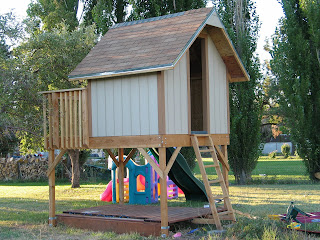 K and M each found black widow spiders yesterday. K's got away, but we caught M's, and he talked me into listing it on ebay. I am not at all sure it'll sell, but whatever he wants. 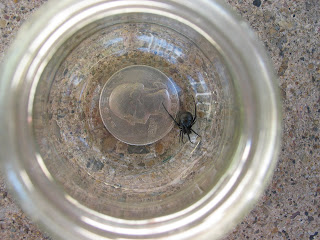 Last weekend's storms made our neighbor's trees lose a ton of branches, so we had a lot of wood to burn. After naps, we decided to have a fire in our fire pit and make "homo dinners". They are actually called tinfoil dinners or hobo dinners. M mispronounced them as homo dinners, and we got such a kick out of it that we've called them that ever since. They're very easy to make, and a family favorite. We get aluminum foil as our "pot". I put some ground beef in there, and chopped veggies. This time, I used carrots, celery and potatoes. Everyone but me also got some frozen corn. J has sometimes added some cream of ...... soup to the mix. I've also heard of many other combinations, but that is our family's favorite. We also usually add onion, but we didn't have any today.

Once I got them double wrapped, I put them in the coals. We had so many coals from all the branches that I actually buried the dinners in the coals, hoping they'd cook faster. 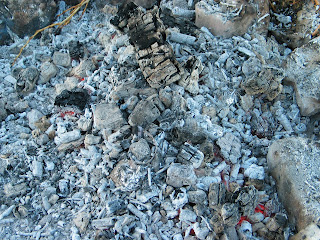 They cooked quite a bit faster this time. I usually turn them every 15 minutes and cook them for about an hour. Last night, however, I cooked them 30 minutes with no turning.

Here's the finished dinners. You'll notice there's only 4. We have S and Z share one, and I like mine a little more well done, so mine was getting an extra 10-15 minutes of cook time while I got everyone else's served up. 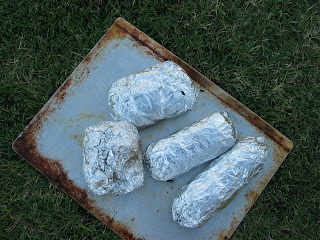 Ewww,I hate spiders! We had a lot of them until my IL's had someone come in and spray. I have only seen one black widow this year.

Awesome! I love spiders. You guys are so much fun. We need to be more adventurous with our kids.

that is such a cool way to cook dinner!