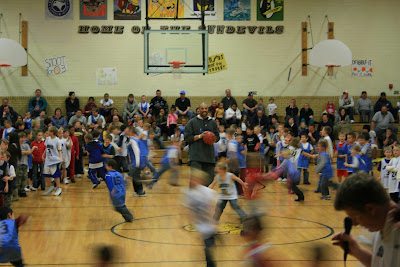 M is doing a community rec. basketball clinic called Junior Jazz. For a fairly modest fee ($55), he gets a jersey, a month of twice weekly basketball instruction by endlessly patient teenagers, two months of twice a week games, two tickets to a Utah Jazz game, and an appearance by a real Utah Jazz basketball player.

He has had a blast with his practices, and will have his first game this week. Tonight was the Junior Jazz pro-player appearance night. I have to admit I am something of a cynic, and figured the player would be some bench warmer. This suspicion strengthened with the weather today. The weather was terrible, getting at least 6-8" of snow at our house in the last 24 hours. However, the kids all were desperate to attend, so we went.

Well, to my surprise and the kids' delight, the player was none other than Carlos Boozer, one of the more popular and talented players on the team. M was especially thrilled because his jersey is #5, just like Boozer.

Boozer was very patient and charismatic with the kids. I was really impressed with how well he did with them. He has a toddler son who has sickle cell anemia and has had quite a few health struggles because of that. Unfortunately, Utah, with its' high altitude and cold winters is really hard on people with sickle cell anemia. However, Boozer and his wife gave birth to healthy twins a few months back, and they did a transplant with the babies' cord blood. This will hopefully cure their older son.

Boozer told a story of a 12 year old boy at the hospital whose parents were really struggling financially, and the boy was going to have to leave the hospital earlier than hoped as a result. When Boozer found out, he paid out of his own pocket to make sure this boy received the treatment he needed. Now, how cool is that?! A faithfully married father, doing acts of kindness that aren't really publicized? This is the kind of guy who we need in pro sports for our kids to look up to.

He even called S "really cute" when she went running out into the gym when he was in the middle of answering questions. ARGH on that toddler!
at 8:54 PM