It was planned for a couple months.  We were going to have a lovely ceremony for our Daisy Scouts to Bridge into Brownies.

I found a park with a lovely little creek, complete with a little bridge for the girls to cross over.

Invitations were sent. Time off from work requested.

I made three huge pans of brownies that looked delectable. One had chopped up Reese's Peanut Butter Cups and chocolate chips. One had marshmallow cream and crushed oreos. The last simply had chocolate frosting and sprinkles. 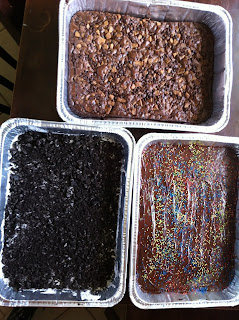 Then, the day of bridging came.  It seemed chilly, but ok.  As the day wore on, the wind increased. A wind advisory was issues. From noon to three, the temperature dropped 25 degrees.  An hour before, it started to rain.


I was just about to call the whole thing off and reschedule for later (mentally sobbing over the brownies and the havoc that much chocolate would do to my diet) when one of the moms called. She had access to a church, and could even get a bridge for us!  Woot!

I made the calls to everyone, and got the venue changed. There was a minor hiccup because one parent wasn't crazy about the denomination of the church where the ceremony would be held, but they had their priorities in the right place, and came anyway.

I was a bit disappointed and rattled over my ideal not happening, but I think things went rather smoothly.  I felt awful because the mom who set the whole thing up is someone I have this ridiculous mental name block with. I know exactly who she is. I like her; she's funny, and nice and smart and really great about volunteering. But for some reason, when I first met her, I mentally stuck her with her daughter's name, and have fairly consistently called her by her daughter's name for well over a year now. Usually, when I get a name to stick in my head, it's there for life. I've been lucky up to this point for them to stick with the correct name. But I can't undo it.