I have tried to keep my chicken ramblings down here a bit. I suspect I haven't been entirely successful, but hey, it's MY blog. S's teacher finds it FASCINATING, and has requested I bring eggs into class and talk to the kids about it. In fact, she wanted me to bring in an actual chicken, but I vetoed the idea. I thought it sounded very messy, chaotic, and traumatic. If the chickens get boring, skip this post. So there.

Lucy, my Black Copper Marans, laid her last egg on Sept. 3. I suspected she was molting, although she didn't look nearly as ragged as other molting chickens are reported as being.

This afternoon, I went to collect eggs (wahoo! 3 were waiting- a light brown, a white, and an olive), I caught Lucy in her favorite nesting box. Interesting. She hasn't even bothered peeking in there since she went on strike.
I went out an hour and a half later, and look what I found? 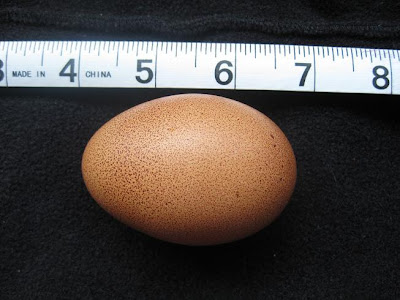 I also found a lovely sea green egg, but I didn't take a picture of it. Yay!

Before, she was laying every other day like clockwork. After a molt, chickens often are less productive layers, so it'll be interesting (to me) to see if she keeps up her prior pace or eases off.
at 7:55 PM