K ended up being our drama queen this year. If you remember, I sewed her that amazing medieval dress this past spring with the understanding that it would be her halloween costume budget spent there. She was agreeable.

Then, in girl scouts, they decided to do those duct tape dresses. I went along with buying the tape for that (which, admittedly, was only about $15, and it also helped repair M's costume, and we have leftovers for other ducting emergencies).

She also was invited to another party before we finished the duct tape dress, so she wore the devil costume my MIL (mother in law) gave her. I took the following picture of the kids on their way out the door to my parents' ward halloween party: 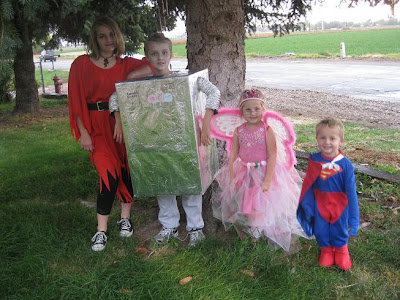 Z loves being superman so much that it's impossible to keep him still when he's wearing the costume, which is why he's the only part of the photo that's blurry. He's worn the costume almost daily since.

Trick or treating was fun. We spent some of the time with J's sister and her family. They went more for looks than function, so, not wearing coats, they tired of trick or treating much sooner than us. Maybe it was the poor economy, or maybe it was the fact that we weren't out on REAL Halloween, but the candy seemed a little less ample this year. It was actually into the "reasonable" category, as opposed to last year's "Are you *&^^$% kidding me?!!!"
at 7:50 PM

You should have went with my kids... they got a TON of candy and only went to a handful of houses.... they got huge candybars... S's costume is way cute.