Ever since we sold Rudy, I've been keeping my eyes open at KSL's classifieds, watching for a new bird for M.

Last night, I finally found what sounded promising, as well as a screaming deal. The family was in the process of moving, and needed to sell their two cockatiels. Included was two male cockatiels, cage, toys, two books, food, bedding, etc. All for $25!!! Holy cow!
I immediately called, and M and I were over there within an hour. We met Sunshine and Freckles, who are both male. Freckles had a mate, and they'd actually had babies together at one point, but she died. As is common in birds, Freckles was starting to waste away from grief.

Sunshine had been abused in his previous home and had his wing broken but not properly cared for, so it didn't heal correctly. He was in a rescue when the brother to the owner of Freckles found him. They picked him up as a companion to Freckles, hoping he would ease his loneliness. They get along really well now. 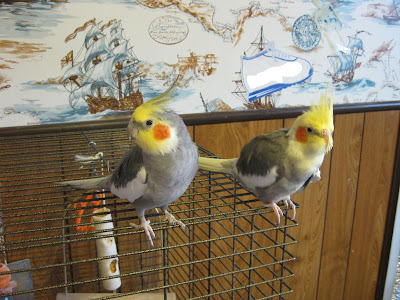 Freckles is on the left, Sunshine on the right

I felt like a total ogre though- the family had two little girls, around 6-8, and they were trying not to cry as they said, "You're going to take them NOW?" I gave their mom my card and assured her that they could come visit any time they wanted, and that I really, really meant it.

We got the birds home, and the kids were thrilled to meet them. Instead of attacking her like Rudy did, they started catcalling her! Believe it or not, she actually blushed!

I am really excited to welcome them to our home, and have high hopes. My only concern is they have no idea how old the birds are. So, hopefully they're not geriatric just yet.
at 7:28 AM