There's a saying- "Jack of all trades, master to none".

I think that describes me. I dabble in a bunch of different things, but don't have the perfectionist abilities to truly excel at any of them.

Today is M's 10th birthday party. He requested pigs in a blanket for dinner, and a lego cake for dessert.

For pigs in a blanket, I used a basic roll dough, and let it rise. Then, I divided it in half. I rolled half of it out into a large rectangle, and cut it into rectangles measuring 3"x 4". Repeat with the other half of the dough. I then wrapped a hot dog in each one. They're rising right now, but they'll cook at 350 for about 15-20 minutes.

For the lego cake, I made a 9x13 sheet cake. I lined the bottom of the pan with parchment paper so it would easily come out. After cooling a bit, I tipped it onto a cooling rack.

Then, I divided the cake into thirds. One of the thirds was divided in half so that I'd have a total of 4 "legos" when I was done. 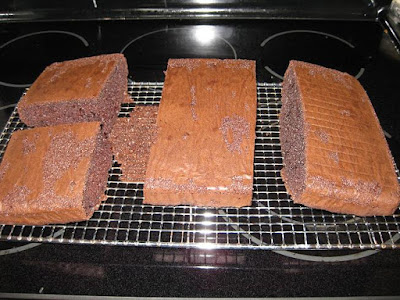 Then I dyed the rest of the frosting and frosted each cake. To make the lego tops, I used large marshmallows that I cut in half and frosted. Rumor has it that they frost easier if you freeze them first, but I didn't try it that way.

I think the finished product is obviously amateurish, but still kind of cool. 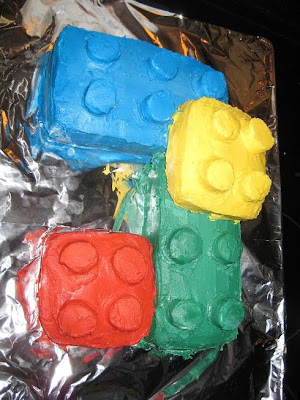 The boys are all playing video games downstairs. I think I'll sneak out, leaving J in charge while I buy ice cream to go with the cake (oops!).
at 4:53 PM

This cake looks awesome! I love cakes and you did a really good job!!! Love it!

Wow. I love this cake. I want one for my birthday.